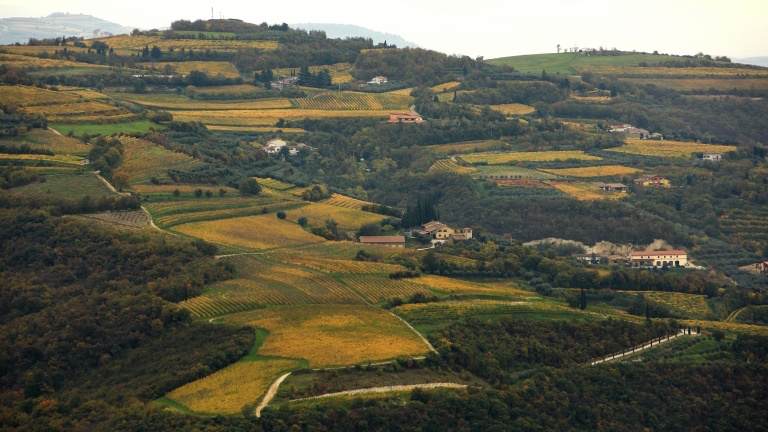 The Monti Lessini wine area is completely hilly and extends through the provinces of Verona and Vicenza.  On the side nearer Verona, the territory includes the upper Val d'Illasi, Valle del Tramigna and the towns located to the north of Val d'Alpone, whilst on the Vicenza side lie the valleys of the Chiampo, Leogra and Agno rivers.

The soils are mainly of volcanic origin, composed of basaltic tuff. But it is not the soil or climate conditions that matter most in this D.O.C. area, but rather the features of the native grapevine, the Durella. Its special quality is a very high natural acidity in the grapes deriving from the plant as opposed to the soil which is mainly alkaline. More precisely, it is the combination of the soil and the plant that gives the grape its unique flavour.

It is also called "Juliet's Wine". Shakespeare drew inspiration for his famous tragedy from a story written by Luigi da Porto, an aristocratic from Vicenza who, in 1530, wrote about the two noble lovers, Romeo and Juliet. In his work he mentioned the "Duràsena" grapes growing in the valleys surrounding the two castles of Montecchio Maggiore where the wine drank by the unlucky lovers was made. The Duràsena of that time is today's Durella variety, which is used to make still or spumante Monti Lessini Durello. Production also includes Monti Lessini Durello superiore and Monti Lessini Durello passito, the latter obtained from the careful selection of grapes which are left to age for at least four months. The acid undertone of Durella is reduced by the high concentration of sugar in this wine which assumes unmistakable accents.

The enchanting valleys of Lessinia offer the perfect itinerary for the Strada del Vino (Wine Road), where visitors can discover the region that has historically been home to and still is home to this extraordinary grapevine. The Road links towns with great wine-making traditions, offering architectural and panoramic points of interest along the way, including one of the most famous fossil sites known to the world, Bolca.