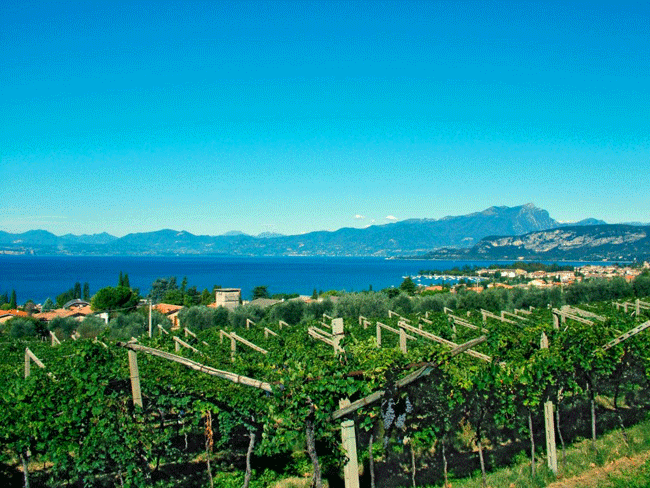 Seeds found in lakeside dwellings in Cavaion Veronese, Lazise and Bardolino suggest that vines have been grown in this area since the Bronze Age.  In particular, the designation takes its name from the homonym town located on the lush green eastern shores of the Garda Lake. Certainly, the name Bardolino is German in origin, but legend also suggests it derives from Bardali, daughter of King Axuleto and niece of Manto, founder of Mantua, celebrated by the Latin poet Virgil and by Dante in the Divine Comedy. Monks from the Church of Saint Columban took care of producing Bardolino in the Medieval period, thereby saving it from obscurity. Until the nineteenth century, Bardolino was usually made by fermenting must in impermeable cavities in the earth, covered with slabs of stone. Currently, the traditional wine-growing and wine-making processes are combined with advanced technology for the purpose of maintaining the features of the grapes that grow and ripen in the singular environment of a lake interland.

The first Protection Consortium of Bardolino wine was established in 1924, in response to a perceived need to supervise and protect the production of this wine whose fame was growing in line with rising trade. A study conducted in 1939 by the Agricultural Institute of Conegliano Veneto led to the definition of the best production areas. At that time, the moraine area that stretches the length of Lake Garda's east coast was identified as the "Bardolino" area (encompassing the municipalities of Garda, Costermano, Affi, Bardolino, Cavaion and Lazise), a separate entity from the "Sona-Custoza" area (including the municipalities of Sona, Sommacampagna and Valeggio) using criteria based on soil type and climate conditions, marking the origins of current zoning studies.

A mild climate, sun exposure, a balance of rain and temperature, soil variety including sand, gravel and clay, in addition to the dedication and skill of wine-makers, have made Bardolino a particularly palatable wine that has won international acclaim.

These wines are made with precise grape mixtures made from the fruit of species of vine native to Verona such as Corvina, Rondinella, Molinara and Rossignola. The seventy kilometres of the Strada del Vino (Wine Road) itinerary link 16 different municipalities along the shore and inland: in this route numerous wineries welcome visitors in the shadows of old churches, Medieval castles and the villas of the nobility encircled by wonderful gardens.