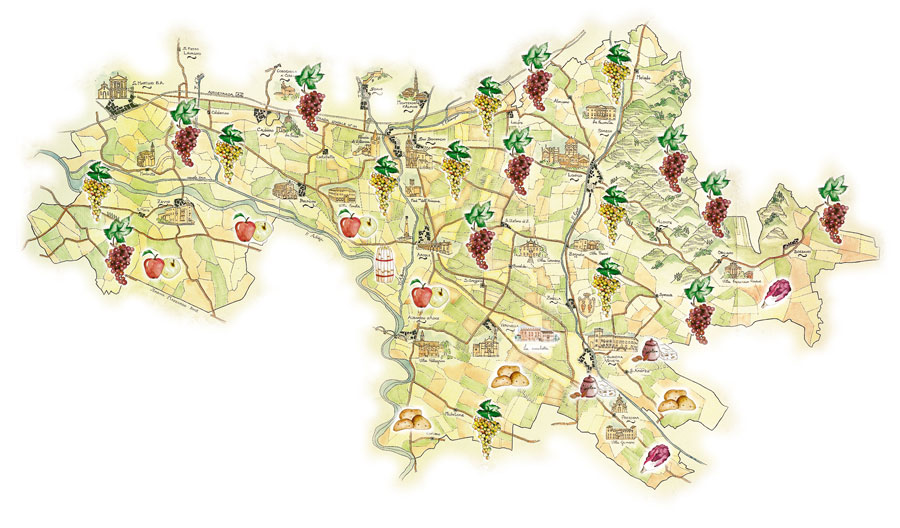 This D.O.C.'s beginnings were defined by official guidelines in 2000. It covers a strip of land extending around 300 square km located on the alluvial plane between the provinces of Verona and Vicenza, while the hilly area is in the south, with Motta Hill in San Bonifacio, and in the east, covered by part of the Berici Hills.

This large area has mainly sandy, or sandy-clayey soil reclaimed over the centuries, canalizing the water of the various rivers, Adige in particular, which flow through the region.

The vineyards that first appeared to the all East of Verona are attributed to the Romans. The area has become especially famous for the cultivation of a particular kind of vine, the vite retica. Monks from the Villanova Abbey cultivated vines, making it the main wine-growing area around the year 1000.

A document dated 1562 demonstrates that the monastery counted «150 vine fields in its possession [...] and [...] there were other fields in Arcole, 579 fields in all ». Wine-growing today draws on modern techniques combined with tradition and the dedication of its wine-growers.

The traditions of wine-growing and wine-making are deep rooted in the territory. Agricultural seasons are still defined by the stages of vine-growing and the work the cultivation entails. Home wineries are still scattered among the vineyards where the genuine flavour of tradition can still be savoured.

Along the first stretch of Porcilana road, an ancient Roman road connecting Este to San Martino Buon Albergo, some road signs reveal the area's Napoleonic origins. The Monastery of San Giuliano di Lepia - a marvellous but little known Medieval jewel - is located at the beginning of this road. A little further on is the town of Gombion where, during the battle of Arcole (15-17 November, 1796) the French military forces led by Napoleon clashed with Austrian forces. An obelisk - the only one in Italy celebrating a Napoleonic battle - stands as a reminder of the French victory in Arcole. More over, along the Strada del Vino (Wine Road) itinerary visitors will come across numerous points of beauty including churches and monuments in this quality wine territory.