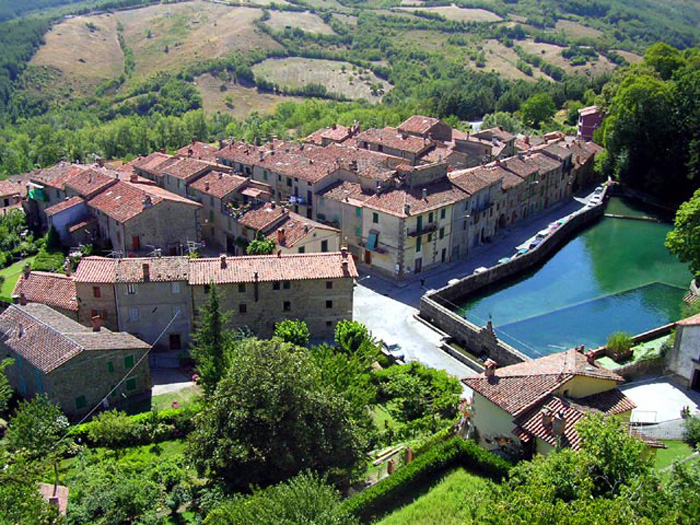 Protected by a cliff of trachyte that dominates the source of the Fiora river is the town of Santa Fiora, located in the Grossetto Region. The inhabited area of Santa Fiora has a different history to that of the other Amiata villages. Santa Fiora was not subject to the Abbey of Santissimo Salvatore, but soon became the most important Aldobrandeschi holding on the mountain, resisting the numerous conquering attempts by the Siennese. In 1439, it passed to the Sforza family, to then finish under Florentine control in 1633.

The first find is the massive Palazzo del Conte, once of the Sforza Cesarini and today seat of the Council. You go round it to the left and passing through it via an arcade you come onto the large piazza that is the sitting room of the town. From the piazza, the Via Carolina leads to the church del Suffragio (1716-1726) and then goes down to the Parish of St. Flora and St. Lucilla, the most important and famous of the town’s monuments. Erected before 1000AD, it was rebuilt in the 13th century and widened in 1792 with the addition of the lateral naves. The interior hosts a collection of splendid terracotta pieces attributed to Andrea Della Robbia.

A downhill slope to the village, the other part of Santa Fiora that is surrounded by walls and dominated by a dark wall of trachyte. Here the church of St. Agostino rises, built 1309 to which was annexed a convent, suppressed by the Lorenas, of which remains an arched door from 1473. In the Village there is also the convent of the Capuchin nuns, founded in 1601 and closed in 1991, linked to the cult of the Miraculous Crucifix and the Procession of the Logs.

For the Porta del Borgo you go in from the district of Montecatino and go down through the Peschiera, a striking lake that gathers the waters of the Fiora. Also of interest is the nearby church of the Madonna della Neve, of modest aspect but rich in well-kept frescoes. Near the Selva district, the Convent of the Santissima Trinità is worth a visit, conserving a beautiful Robbian crucifix and a series of precious paintings, and in the 18th century cloister the legendary dragon head brought back by a traveller from the past.