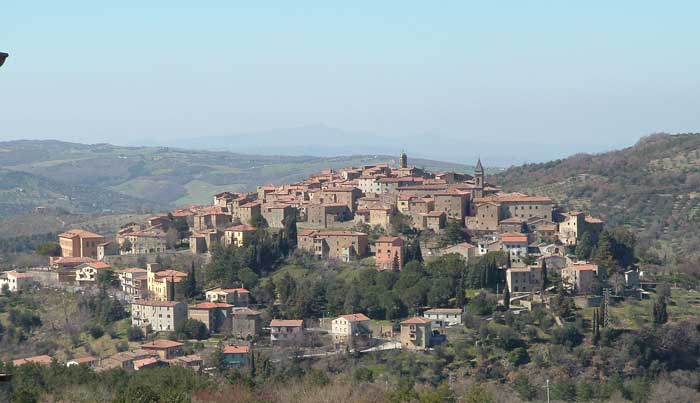 Seggiano is sits on the lower slopes of the Amiata mountains cone, and is in the Grossetto Province. It is among olive groves (of the Seggiano green variety) that, when you get close to Seggiano, the Sanctuary of the Madonna della Carità appears, one of the most unusual and interesting religious monuments of the Amiata. It is the only complex in the Siennese territory of late 16th century architecture linked to the manneristic Mitteleurop style. It was built after a famine of devastating consequences: started in 1588, the completion probably dates back to 1603. The exterior, with a complex and rich façade and a brick dome in four segments, is particularly striking.

Nearer to the inhabited area is the little church of St. Rocco, built in 1486. The interior, in just one room, conserves interesting frescoes upon which soldiers of yore left their signatures: a vandalism that through the years has acquired a certain historical value. Opposite the neo-gothic Town Hall is the parish church dedicated to St. Bartholomew. Built in the Middle Ages, it was reconstructed in style in the ‘30s, and hosts a polyptych that shows the Virgin on the throne with Child and St. Bartholomew, St. Michael and St. John Evangelist, by Bartholomew Bulgarini, a Siennese painter active in the mid-14th century.

Even higher up is the church of the Corpus Domini, also dedicated to St. Bernard of Siena. Of particular interest is a late 14th century Madonna with Child and relics belonging to St. Bernard of Siena. From Seggiano, a road that offers a splendid glance over the town and on the dark mass of the Amiata, leads to the Castle of the Potentino, across the celebrated Valley of the Olive Groves. The castle is surrounded by cultivated fields and closed to visitors. A little further on are the ruins of the Convent of the Colombaio, where St. Bernard of Siena passed his noviciate.