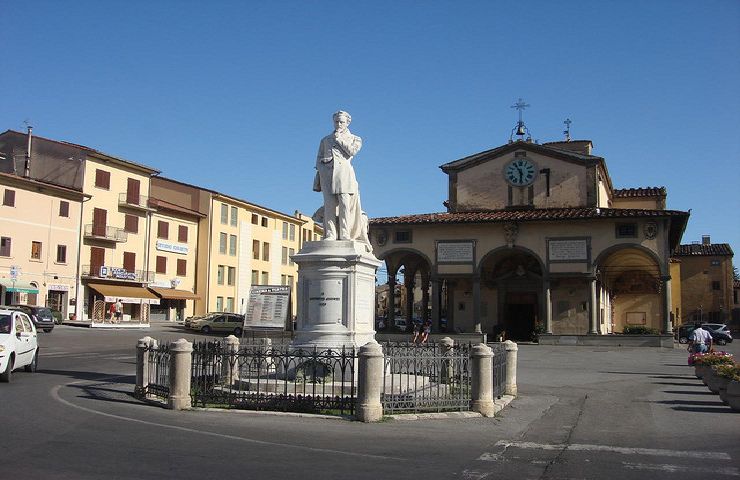 Monsummano Terme and its surrounding villages has everything from spas to handmade shoes. Situated between the last ramifications of Montalbano and the northern border of the "Padule di Fucecchio" (the Marsh of Fucecchio), Monsummano Terme is now famous as a thermal resort and for the production of shoes, exported all over the world.

The town has expanded around the "Santuario della Madonna della Fontenuova" (the Sanctuary of the Madonna of Fontenuova) founded in 1602, at the will of the Grand Duke Ferdinando I de' Medici in gratitude for a miraculous event. The northern side of the main square boasts the "Osteria dei Pellegrini"(1607), which houses the "Museo della Città e del Territorio".

The museum is divided into several sections: geology and palaeontology, environment and history, archaeology, the "Padule" (marshes) and reclamation, grand-ducal farms, sacred art and popular religion, the treasure of the "Madonna della Fontenuova", the "Valdinievole felix", the "termalismo"(thermal baths), and industry in the area.

Medieval villages Monsummano Alto and Montevettolini are set in the surrounding hills. Monsummano is the birthplace of well known Italians including the poet Giuseppe Giusti (1809-1850), whose house has now become "Museo Statale di Casa Giusti ", and Ferdinando Martini (1841-1928), a man of culture and a brilliant politician whose stately villa, "Villa Renatico Martini", built around 1887, is seat of a 20th century art collection called "Il Recanatico".

The hill of Monsummano rises 340 meters above sea-level at the northern foot of Montalbano. Today some ruins of the ancient castle still remain, surrounded by a two-kilometer long, elliptic circle of walls, as well as two of three sets of doors: the north-west door of "Nostra Donna" (Our Lady) and the so-called "Porta del Mercato"(Market Door) or "Porticciola" (Little Door). The latter is almost intact and faces the hill of Montevettolini. At the end of the walls a solid, pentagonal tower is still standing. It dates back to the beginning of the 14th century and it is one of the most imposing towers in the province.

The church of San Nicolao is the best preserved building in the village. It was built over-looking the ancient platea communis in the 11th century. On the northern side is the ancient Church of San Sebastiano. In front of it are the foundations of two buildings and fragments of ceramics from various ages, which were found during recent excavation. On the western side there are ruins of a convent almost hidden by the undergrowth surrounding the heart of the castle, and on the eastern side, ruins of the ancient Spedale di San Bartolomeo (Hospital) appear next to the tower.

The small borough of Montevettolini rises at the northwestern foot of Montalbano. It was founded on the top of the hill around the 12th century. The Medicis chose Montevettolini as their resting place while hunting, and at the end of the 16th century, Ferdinando I entrusted Gherardo Mechini and Domenico Marcacci to build the imposing villa, today known as the Borghese at the western end of the surrounding walls. Ruins of the surrounding walls and of one of the six castle defence towers, the so-called "Torre dello Sprone" or "Torre delle Murina", can be seen to the west of the built-up area. The entrance to the village consisted of the following gates: the so-called "Porta del Cantone", which was incorporated into the Medicean villa, and the "Porta del Vicino" or "del Malvicino", later called "Porta dei Barbacci", the only one which is still undamaged.

Located in the borough was the oratory of San Francesco to the West of the church, and that of Corpus Domini built in Bargellini's square, which today is the seat of the local Music Society, founded in 1863.

The 13th century Town Hall still shows the podestas' coats of arms hanging on the facade, and it incorporates an ancient guard tower to the right. A medieval tower was used as a church belfry as well, which was built in the 15th century in the place of the older one, which had been incorporated inside the ecclesiastic building. A chapel dedicated to San Michele, belonging to "San Giovanni Battista" and "San Lorenzo a Vaiano"'s parish church, had risen in the place of the church since the 12th century. It was enlarged over the centuries and was given the status of parish church after the oppression of the parish of Vaiano in 1449, when it was dedicated to San Lorenzo, as well.

During the second half of the 18th century, the area that included the Cintolese borgo was part of a land reclamation project financed by Grand Duke Pietro Leopoldo, which drained all of the marsh area. The reclamation allowed for new work and development projects in the agricultural sector. A new parish church was consecrated to Saint Leopold the Confessor in 1781.