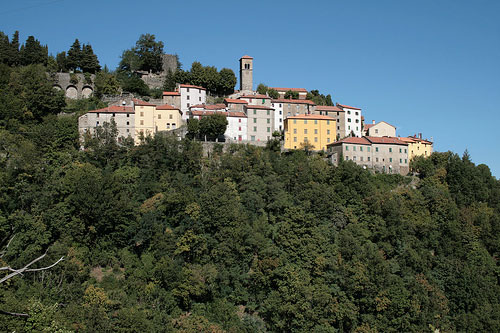 The town of Sambuca Pistoiese is in the province of Pistoia, but is placed on the northern slopes of the Apennines Sambuca Pistoiese. In the town you can admire the Sanctuary of St. Mary del Giglio, Villa Gargallo, the Sambuca Castle and the church of St. James. The reasons behind the foundation of a Tuscan village in such a geographical position must be traced back to the arrival of the Longobards who, between the VII and the VIII centuries, after having conquered Pistoia, decided to protect the boundaries with the Byzantine army with a series of fortifications, some of which today are part of the Emilian territory. In 727 the Longobard King Liutprando finally succeeded in conquering Bologna but a part of its subjects, by now established in the area, settled permanently.

With the invasion of the Sacred Roman Empire the Longobard seigniories were replaced by new feudatories in the area, among which the bishop of Pistoia whose dominions are demonstrated right in the Limentra valley where today Sambuca stands, as confirmed also by an imperial bull from 998, signed by Ottone III. One of the Pistoian bishops, Martino, started the building of the Sambuca castle in the XI century. It was the very inhabitants of the place, a century later, that contended him for it. However in 1104 the intervention of Matilde de Canossa’s tribunal sanctioned the domination of the Curia.

One year later the free commune of Pistoia was founded and Sambuca became its main northern fortified outpost, especially during the war that lasted throughout the entire XII century between the Tuscan city and Bologna. At the end of the conflict in 1211, Pistoia annexed many other villages of the Limentra to it (that now are part of the Sambuca council) and gave the castle back to the bishop. Sambuca granted itself its first statutes in 1291, but was not fully out of the bishopric’ feudal seigniory until between 1311 and 1368, when Pistoia first purchased the castle and then the ancient Episcopal rights.

In 1402 it became part of the Florentine Republic and even in this case became one of the most important bastions on the Emilian front. In the Grand Ducal age the territory of the current council was divided between the Captaincy of the mountains and the podestà jurisdiction of Montale, to which went Treppio and Torri. The reunification of a single autonomous “comunitas” only came about in 1824.