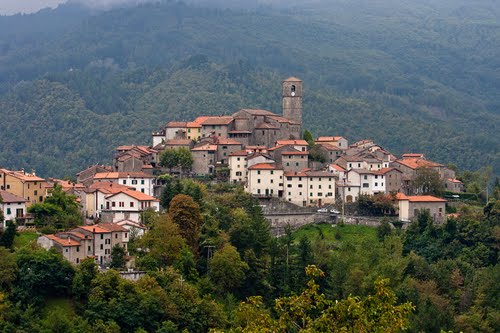 Piteglio is the second-largest municipality in the Province of Pistoia. Located at 698 meters above sea level, it has a population of about 1800 inhabitants. In Piteglio you can admire the church of St. Bartholomew in Lanciole and the church of San Miniato in Calamecca. Piteglio’s foundation dates back to a military garrison of the Liguri, built to answer the pressure of the Romans who established themselves in the area around the II century BC. Documented sources tell us of the presence of a fortress only from the XII century. In numerous imperial certificates (of Henry VI in 1191 and Frederick II in 1220 and 1247), we see the reinstatement of the castles of Piteglio and Popiglio to the Guidi counts of Modigliana.

Stimulated by the birth of the free commune of Pistoia, Piteglio and the other nearby villages gave themselves the statute of autonomy in the XIII century and passed under Pistoian protection. In the second half of the century the new commune became part of the Captaincy of the High Mountains, so becoming involved in the centuries-old struggle between the Panciatichi and the Chancellors, which only came to an end around 1539, when Pistoia became part of the grand Duchy of Tuscany and Cosimo I de’ Medici succeeded in pacifying the area and stabilising the boundary with the dominion of Lucca (1538).

The local system, characterised by the presence of a multitude of little autonomous communes, was reorganised in 1774 under request by Grand Duke Pietro Leopoldo di Lorena. His reforms prepared to unify the centres of Calamecca, Crespole, Lanciole, Piteglio and Popiglio under a single administration, of which Piteglio has always been the capital - if you exclude the Napoleonic period at the beginning of the 19th century when Popiglio was chosen to be the council capital. The territory of the council was crossed in 1944 by the Gothic Line, along which the Nazi-fascist occupiers fought against the Allied soldiers.