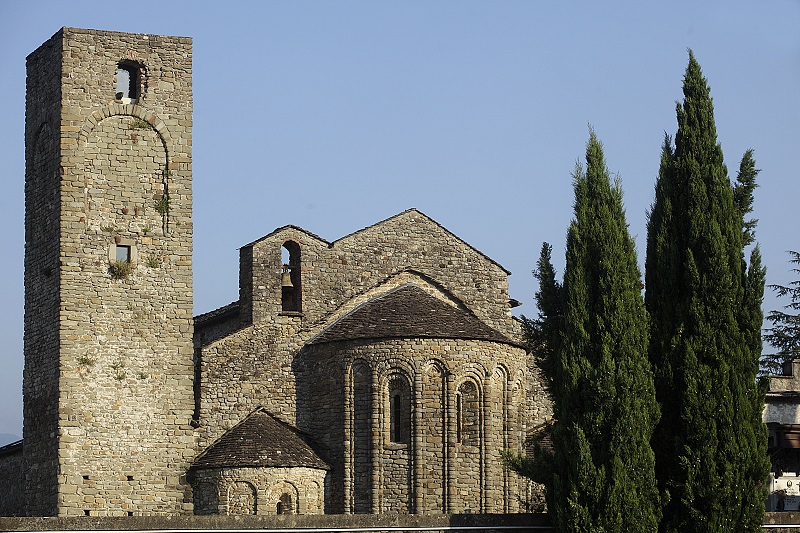 The town of Filattiera extends for 48.97 square kilometres in a mountainous area, on the left side of the Magra, in the high Lunigiana. Located in the Massa Carrara Province of Tuscany's Lunigiana area. The name of the town, deriving from Fulacterion, a byzantine term indicating the defence fortresses in important strategic points, means the original time and the architecture.

In Filattiera, in the shade of the most elegant, striking parish church in all of Lunigiana, the meadows hide archaeological treasures that have already been studied and await only to be displayed and illustrated in the local museum. Exhibits will show how this plain has been inhabited without interruption from prehistoric times through the Roman era, the age of the Byzantines, and the great Middle Ages until Filattiera became the capital of the Malaspinas, who selected as their emblem the flowering blackthorn.

The parish church of Santo Stefano di Sorano, recently restored and reopened for worship, was built as a place of worship in the 6th century, near the great Byzantine defensive works on the site of a large Roman farmhouse (1st-3rd century) on the road that from Luni rose toward the Po valley. But even earlier, the Apuan Ligurians had installed their pantheon of stone idols, which were brought down by Christianity and the cultures of other peoples and ended up being used as simple stones for construction or as tombstones, as is the case of the female stele and Iron Age warrior on display inside the parish church.

The village that stands on the hill is typically medieval in plan, with its 13th-century castle and houses aligned along the ridge. In the southernmost portion there remains, isolated, the complex of the first medieval settlement with the military watchtower and small church of San Giorgio. This church preserves the most extraordinary epigraph of medieval Lunigiana: it recalls the meritorious deeds of an extraordinary man of the cloth, perhaps named Leodegar, who converted the inhabitants to Christianity, broke the pagan idols, built churches, and gave bread and repose to pilgrims along the Via Francigena.

For the pilgrims, the village built a hospice dedicated to Saint James, which still bears a beautiful marble bas-relief of the saint. At the upper door, on January 16th, the eve of the feast of Saint Anthony Abbot, the ancient rite of the purifying bonfire is still celebrated. An enormous pile of wood is ignited immediately following the blessing; a brand from the fire is carried into the stalls and coops to protect the farm animals, over whose well-being Saint Anthony holds vigil.

A short distance from the parish church, an ancient water-powered mill, still in working order, echoes the not so far-off past in which the wide plain, reclaimed from the river, was fertile and intensively cultivated farmland.

Near Filattiera, in the village of Ponticello, the medieval homes recall the difficult times when the inhabitants locked themselves and their harvests into tower-homes; their access doors, high up on the walls, were reached by ladders which were pulled up in case of danger. Between Ponticello and Caprio, the nobles of Pontremoli built elegant villas; toward the Appennines, the powerful Rocca Sigillina and Serravalle controlled important military and trade routes toward Parma.

Lost among these mountains are the ruins of an important military stronghold from the early Middle Ages: Montecastello, a 7th-century bastion that defended the valley from invaders from beyond the Appennines.