HISTORY OF VENETIAN RULE IN SIRMIONE 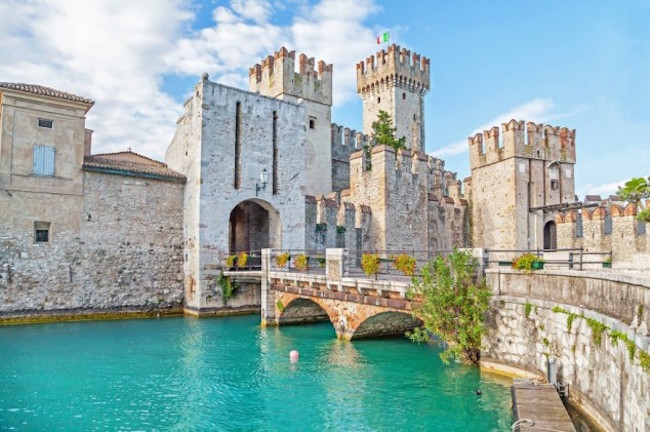 Since 1197 the peninsula became subdued to the town of Verona, then to the Scaligeri, taking on a significant importance due to the control exercised by the castle, which held a garrison. The building, which can  be admired still today, is the work of the Scala family, while the existence of a fort before their domination is attested by more than one document.Completely surrounded by water, the castle overlooks the lake from its keep, the higher tower. The date of  the building is complex. The analysis of the masonry have led to the identifications of three phases, the first dates back to Mastino I della Scala (XIII c.), the second to the early fourteenth century, the third to half fourteenth century., when the harbor was fortified. The core consists by the four main courtyard enclosed by curtains, by the three corner towers and by the keep.

The castle is connected to the church of Santa Maria del Ponte, also known as the Oratory of the Blessed Virgin at the Bridge, but it’s called St. Anne by the inhabitants of the village, which has identified, without any basis, the figure depicted in the fresco with the Virgin's mother since immemorial time. The church, considered by some people the chapel of the garrison stationed at the castle, consists of a room with a barrel vault and a presbytery. In the fifteenth century was a small chapel, probably a little sanctuary as it’s shown by the fragment of the fourteenth-century fresco above the altar.In 1387 the dynasty of the Scala went down with Antonio and Verona gave way to the two powers between which it was narrowed: Venice and Milan. Sirmione began a fast turnover of Lords, until in 1405 the long Venetian rule began, and it  lasted until 1797.

The Venetian Republic dominated the Garda Lake by a Lake’s Captain, living in Malcesine. The domination over the waters, however, did not coincide with the territorial one: Riva and its territory belonged to the Bishop of Trent, while the Lion of St. Mark's stood up on the lands of the provinces of Verona, among which there were Peschiera, Sirmione and Brescia.

During the centuries of Venetian rule the history of Sirmione is poor of evidences. It’s the story of a small quiet village inhabited within the bridge by fishermen-growers, while in the countryside the peasants were engaged in the cultivation of grapes and mulberries. In 1530 there were 1155 inhabitants, then decreased for epidemics. The town was troubled for centuries by the strifes between the so-called "originals", which boasted an ancient lineage, and the newcomers, or "foreigners", about the  management of communal property, from which  the latter were excluded up to 1780. The community was governed by a board elected by the "vicinia", i.e. one class of citizens who enjoyed special rights about the communal property. Despite the poverty of the majority, in the Venetian period the great estates, that relied on the master estate, asserted themselves. An important witness of their former greatness remains in the hinterland, the Onofria dairy farm.

The long Venetian domination ended in 1796 when Napoleon entered the Veneto to unleash an offensive against the Austrians. He conquered Venice in 1797, but later, with the Treaty of Campo Formio, he ceded it to Austria in exchange for Belgium and Lombardy. The Austrian army entered Venice in 1798. Napoleon regained Venice and ruled from 1806 to 1814, when he was expelled again by the Austrians. In 1848 Venice revolted under the leadership of Daniele Manin, but  the Austrians returned in 1849 and they stayed up to 1866, when Austria ceded Venice and the Veneto to the king of Italy. On that date the municipality of Sirmione regained its territorial unity, broken in 1859, after the second war of independence. In fact, the border between Austria and the Kingdom of Savoy ran up to the building called "Old Customs", which contains the name of its former function.