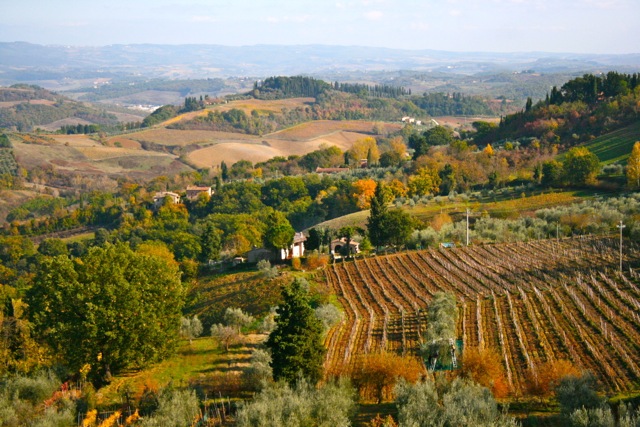 The Chianti territory with its hilly countryside of incomparable beauty lies in the very heart of Tuscany. Administered by both the Provinces of Florence and Siena, during the Middle Ages it was harshly contested by these two rival cities until 1555 when the Medici’s imposed their hegemony on all of Tuscany. It is difficult to trace its borders since only the mountains of Chianti in the East separate it from Upper Valdarno in a natural and neat way; the remaining territory fades into the hills of the Arbia, Elsa, Greve and Pesa rivers.

Mediaeval villages, castles, churches, abbeys, monasteries, cottages and villas lie one after the other in a fantastic itinerary that exalts the activity and inventiveness of man; centuries of work have modelled the hills of this region and the alternation of the olive groves and the forests creates a harmony unique to the world.

Along Via Cassia, or alternatively the faster Florence-Siena superstrada, one can follow again the paths once taken by pilgrims and wayfarers who, during the Middle Ages, reached Rome from Northern Europe with everything that it had to bear: parìsh churches, small towns, hospices, abbeys. Via Chiantigiana, on the other hand, is a more rural path that throughout its length crosses the classic wine region.

In any case, the visitor will be offered an unforgettable countryside always varying and harmonious and so diverse in colours and in atmosphere with the changing seasons. There are many ways to get to one of the parish churches, castles or isolated towns, silent witnesses to the historical and artistic richness of the Chianti region.

It does not matter how one gets there: whether by car, motorcycle, bicycle or bus, there are many possibilities for staying and enjoying a few days' holiday in the relaxing atmosphere of Chianti, tasting the gastronomic specialties of the region accompanied by wines that have made Chianti famous all over the world.

EXPLORING ALONG THE VIA CASSIA

Today's Via Cassia does not correspond, in the Tuscan section, to the ancient Roman road and not even to Via Francigena, the mediaeval trail that ran along the Valdelsa valley. It was however an important main road that the pilgrims and merchants took to get to Via Francigena at Poggibonsi. Since the XV century it was called "strada regia romana" and represented the main road between Florence and Rome until the construction of the Autosole motorway.

Since Via Cassia passes through many urban centres and is at times rather congested with traffic, the hurried tourist may choose to take the Florence Siena Autostrada that can be left whenever one wishes to visit one of the proposed locations.

Before reaching Via Cassia, Galluzzo's Certosa is worth a visit. It rises on the hills of Montaguto to the south of Florence. It was founded by Niccolò Acciaiuoli in the XIVcentury, for the purpose of housing young Florentines who wished to learn the liberal arts. It is surrounded by high walls, which, together with the majestic Palazzo degli Studi bestow upon it the aspect of a fortress.

Preserved inside Certosa, now inhabited by a group of Benedictine Cistercian monks, are some important works of art, among them there are 5 lunettoni (crescent shaped paintings), frescoes of scenes of the Passion by Pontormo painted between 1523 and 1525 during his permanence there while escaping the plague that had hit Florence.