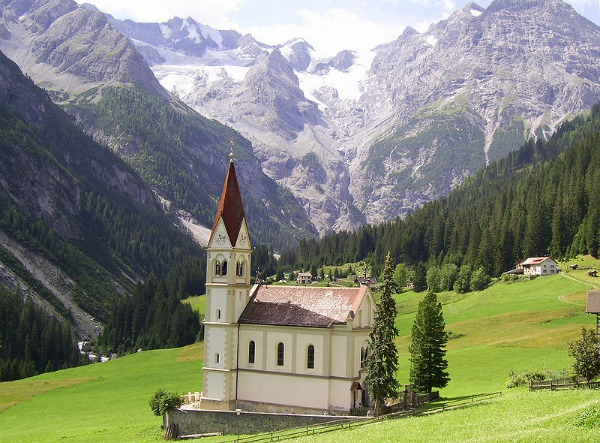 The Autonomous Province of Bolzano, (also know as the Alto Adige / Sud Tirol) lies at the climatic intersection point between the bracing north and the warm south.  Sud Tirol has therefor long been a meeting point for traders, carriers, pilgrims and keen travellers, which has required the setting up of suitable accommodation. As Trentino, it is rich in valleys from which you can often have a different view of the same spectacular peaks. The Sud Tirol shares with Trentino a unique mountain landscape of exceptional beauty, with jagged pinnacles, craggy ridges and sheer rock faces: the Dolomites.These mountains, so often described, painted and sung about are yours to be experienced, climbed and to get to know. No where else in Italy is there as many nature reserves as there are in this province.

With in the province there are many Dolomite legends, customs and traditions that speak a language of their own, reflecting the fascinating world of the "pale mountains" to explore. But also the hay-baths of Vûls, the famous local costumes, the farmers' weddings in Kastelruth, the medieval Viles of the Badia valley - all are testimony to a rich and eventful past.

If the Dolomites are the Queen of the entire region the Drei Zinnen pinnacles in the Pustertal valley are certainly the King. In the beginning when the Earth's crust burst asunder, the highest peaks and jagged ridges were formed: the Pustertal valley. If you were to fly over South Tyrol's "greenest valley" you would clearly make out not only the "Drei Zinnen" pinnacles but many other awe-inspiring mountains.

In Summer the whole SudTirol invites you to lap up the sun, to enjoy the clear mountain air, to go for a walk in its forests, to enjoy the green-blue of its lakes and streams. You can visit its castles and chapels rich in history and art, the result of centuries of cultural, economic, political and religious exchanges, some peaceful other not. SudTirol is a string of villages and unique towns like Bolzano-Bolzen, Meran-Merano and Toblach/Dobbiaco. Bolzen is the Provice-Capital. Meran, with its orchards and vineyards, the sub-tropical vegetation with palms and cypress trees, the magnificent Liberty-style buildings, the promenades, the imposing castles (among them Schloss Tirol, the ancestral home of the Counts of Tyrol) - has drawn famous and not so famous visitors since immemorial time. In 1909, Gustav Mahler said this about Toblach/Dobbiaco : "It is wonderful here and certainly heals body and soul". In the Toblach's woods the wind still brings the notes of the "The song of the Earth", the most famous Mahler Symphonies.

For winter sports there are about 416 lifts with about 800 kilometres of ski pistes, 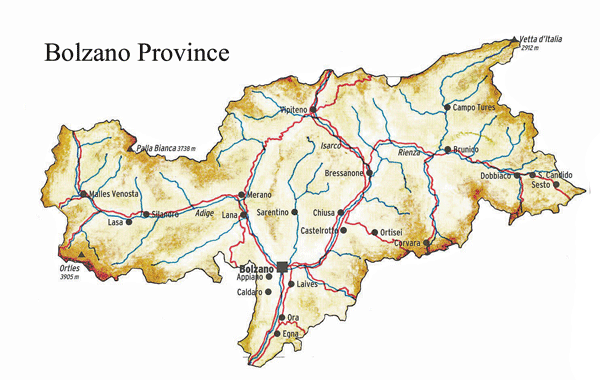 HISTORY OF THE BOLZANO PROVINCE

From a historical point of view, you should remember that, after the Second World War a basic agreement was reached within the framework of the peace negotiations in Paris: on 5 September 1946 the "Paris Agreement" was signed by the Italian Prime Minister Degasperi and de Austrian Foreign Minister Gruber, and annexed to the peace treaty with Italy, so that the South Tyrol Question was thereby given international standing.

This agreement provided, amongst other things, for Italy to give the Province of South Tyrol an autonomous legislative and executive power. Italy believed it could fulfil this obligation with the issue of an Autonomous Statute, adopted by the Constituent Assembly on 31 January 1948. Despite string opposition from the South Tyrolese representatives, the autonomy which in the Paris Agreement had been foreseen for South Tyrol alone was extended in the 1948 Autonomy Statute to the Trentino, and the "Region Trentino - Tiroler Etschland" (Trentino - Upper Adige) was created.

COMMUNITIES OF THE BOLZANO PROVINCE