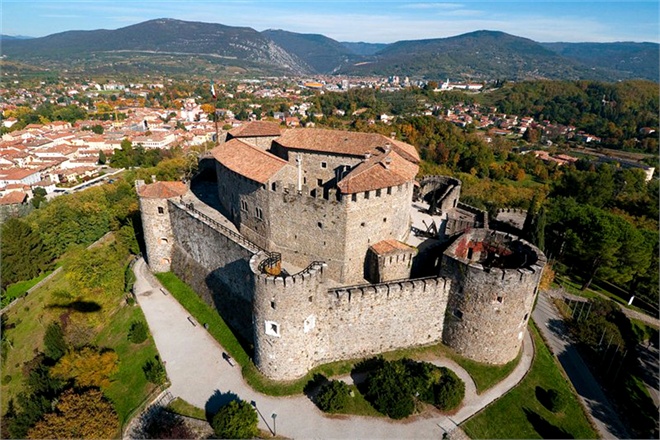 The Town of Gorizia (Friulian: Guriza) is a town and comune in northeastern Italy, in the autonomous region of Friuli Venezia Giulia. It is located at the foot of the Julian Alps, bordering Slovenia. It is the capital of the Province of Gorizia and a local center of tourism, industry, and commerce. Since 1947, a twin town of Nova Gorica has developed on the other side of the modern-day Italian–Slovenian border. The entire region was subject to territorial dispute between Italy and Yugoslavia after World War II: after the new boundaries were established in 1947 and the old town was left to Italy, Nova Gorica was built on the Yugoslav side. Taken together, the two towns constitute a conurbation, which also includes the Slovenian municipality of Šempeter-Vrtojba. Since May 2011, these three towns are joined in a common trans-border metropolitan zone, administered by a joint administration board. Gorizia is located at the confluence of the Isonzo and Vipava Valleys. It lies on a plain overlooked by the Gorizia Hills, renowned for the production of outstanding wines, under the name Collio Goriziano. Sheltered from the north by a mountain ridge, Gorizia is protected from the cold Bora wind that affects most of the neighbouring areas. The town thus enjoys a mild Mediterranean climate throughout the year, making it a popular resort. The name of the town comes from the Slovene word meaning "little hill", which is a very common toponym in Slovene-inhabited areas.

GETTING AROUND IN THE CITY OF GORIZIA

The Italy-Slovenia border runs by the edge of Gorizia and Nova Gorica and there are several border crossings between the cities. The ease of movement between the two parts of town have depended very much on the politics of both countries, ranging from strict controls to total free movement since December 21, 2007 when Slovenia joined the Schengen area. Designated border crossings are (Gorizia- Nova Gorica):

WHAT TO SEE AND DO IN GORIZIA