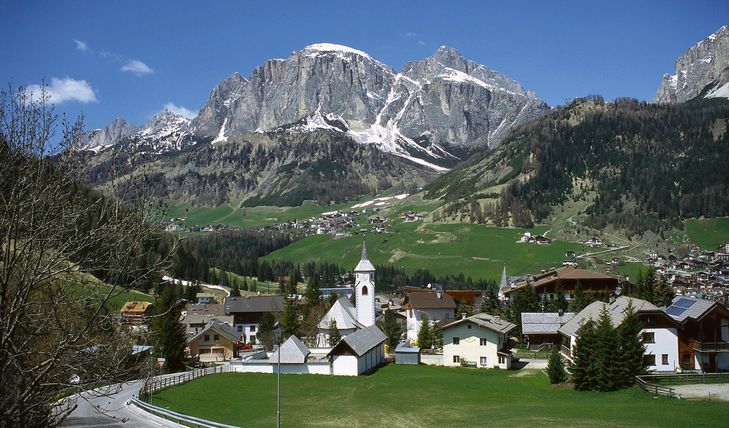 Badia - Abtei, Province of Bolzano, Trentino Alto Adige, Italy. Badia - Abtei belongs with Corvara in Badia (Kurfar), San Martino in Badia (St Martin in Thurn) and La Valle (Wengen) to the main Ladin communities in the Badia Valley. It is a "comune sparso", that is, a comune that includes villages of various names, none of which has the name of the municipality; the townhall is situated in the "frazione" of Pedraces. The area can be reached through the valley of San Lorenzo and over several mountain passes like the Valparola and the Gardena Pass, which can be only used in the snow-free period.

Badia is included in the administrative entity ("comprensorio") of the Val Pusteria (Pustertal), in the south-east of the Province, bordering the two communes of the Belluno Province Cortina d'Ampezzo and Livinallongo del Col di Lana. Its territory is in the Puez-Geisler and Fanes-Sennes-Prags Nature Parks, and surrounded by the summits of Lagazuoi (2778 m), Conturines (3064 m), Lavarela (3055 m), Heiligkreuzkofel (2907 m) and Gardenaccia (2500 m).

The history of the area and its mountain villages is closely linked with the medieval colonization by the Benedictine convent of Sonnenburg in the nearby Val Pusteria, from which abbey ("Badia" in Italian) the name is derived. Badia belonged up to the end of World War I to the Austrian jurisdiction of Enneberg and was part of the district of Brunico.