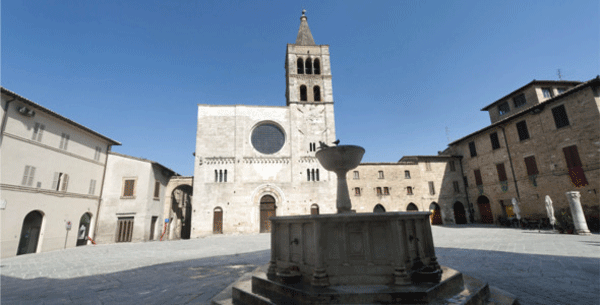 Bevagna is a relaxed town south of Assisi has Roman ruins, interesting churches, and more. Locals offer their guiding services for free (usually Italian-speaking only) and are excited to show visitors their town.

WHAT TO SEE IN BEVAGNA

Bevagna differs from the other two points of this Valle Umbra triangle in being essentially a valley town. It lies close to the course of the Teverone river, which was channelled into the photogenic mill races and ponds that can be seen just outside the eastern stretch of the imposing town walls. On a branch of the Via Flaminia, Bevagna was at least as important as Spello in Roman times; Agrippina, Nero's mother, had a villa here, and the area's fertile agricultural lands were famous for their cattle farms (today it is wine and olives that dominate – though Cannara, just to the north, is famous for its onions).

Sleepy Bevagna seems to struggle to fill the area within its walls: but this is all a part of its charm. The town's fitful, slow-motion development after its Roman high-water mark gave rise to an organic urban fabric, in which the past was reused rather than removed. Layers of history coexist. The town's best-concealed Roman-era sight lies underneath a modern building in Via di Porta Guelfa. Sea monsters, a beautifully detailed lobster and a crazy octopus designed on the mosaic floor of a second-century-AD baths complex (entrance is via the combined Museo Civico ticket, which also takes in Bevagna's cute little 19th-century theatre).

Bevagna's other essential sights are San Michele Arcangelo and San Silvestro, the two Romanesque churches that face each other across the intact medieval main square, Piazza Silvestri. Both are fascinating, but my favourite is San Silvestro; its utter lack of adornment and steeply raised presbytery radiate a stern purity.

Get a map at the TI on Piazza Silvestri (daily 9:30-12:30 & 15:00-19:00, tel. 0742-361-667) and wander. Highlights are the Roman mosaics, remains of the arena that now houses a paper-making workshop, the Romanesque church of San Silvestro, and a gem of a 19th-century theater. Bevagna has all the elements of a hill town except one: a hill. You can see the main sights easily in a couple of hours.

WHERE TO STAY IN BEVAGNA

Bevagna can be reached by bus from Foligno.