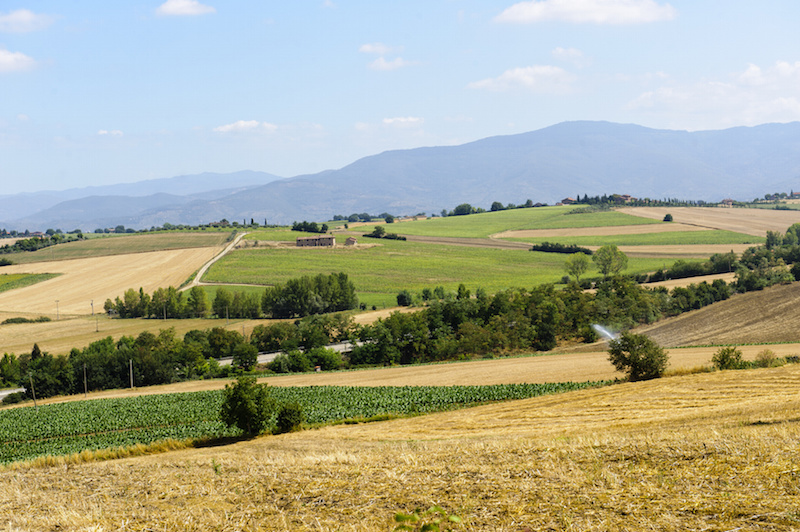 The Val di Chiana (Valdichiana) was extensively settled by the Etruscans and Romans. Because of the low river and steam gradients, deforestation resulted in silt accumulation and the valley of the River Chiana slowly became an extensive marshy area. Malarial infestation began in Etruscan times and became seriously hazardous during the Middle Ages and Renaissance when the wetlands were as much as 140 sq km in area. Drainage was first proposed during the 14 C and by 1500 land reclamation was taking place. A man-made channel, the Canale Maestro, was dug to reverse the direction of water flow from southward into the Tiber to northward into the Arno. This work was completed in 1840. Tributary streams were also canalised so that the area is now a fertile alluvial valley. The present-day appearance of the Val di Chiana is thus the result of marsh drainage and reclamation work that was started by the Romans and carried on right through to the 20 C. Leonardo da Vinci drew a map of the area at the beginning of the 16 C, that shows the valley occupied by a large lake running north-south. The towns and villages in the hills on either side of the lake communicated by means of a ford at Valiano, a small village that still exists. There are now just two remnants of the original large lake, the Lago di Chiusi and the very small lake at Montepulciano.

The Val di Chiana extends over the territory of 22 municipalities in the provinces of Arezzo and Sienna in Tuscany, as well as of Perugia and Terni in Umbria. From the north, the valley runs southwards from Arezzo and westwards of Cortona, both of which have magnificent views over the plains of the valley floor. The Val di Chiana thus lies between between the Val d'Orcia and the Val Tiberina (Tiber valley) below Perugia, where the Upper Tiber Valley begins. To the north is the Siennese Chianti and part of the Val d'Elsa. The much hillier Val d'Orcia lies to the west of Montepulciano, across a ridge that starts with Monte Cetona in the south. As throughout the region, Sienna and Florence fought for control of the Val di Chiana on a number of occasions.

Val di Chiana can be broken into three sections

This is the part of the Province of Arezzo covered by the municipalities of:

These are municipalities that were already under the control of the Medici in 1554, the year of the Battle of Scannagallo after which the Florentines occupied the entire valley. The Aretine Val di Chiana lies at the convergence of the four historical valleys of the province of Arezzo together with the Valtiberina, the Casentino (Upper Val d'Arno) and the Valdarno itself.
Siennese Val di Chiana (Valdichiana senese)

This is the part of the Province of Sienna covered by the municipalities of:

"Roman" Val di Chiana refers to the territory of five municipalities in Umbria. Three of these are in the province of Perugia

and two are in the province of Terni: