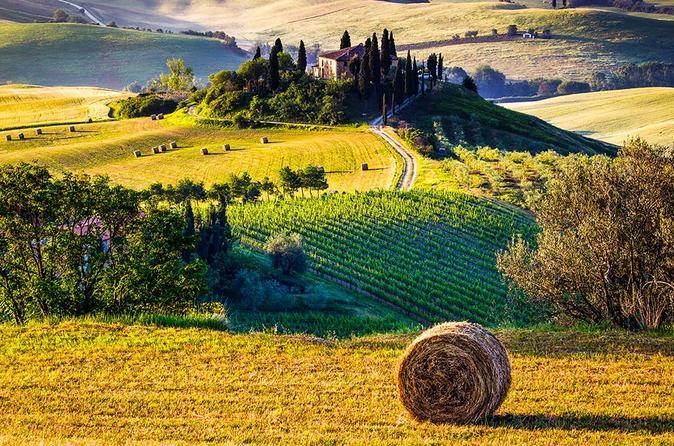 The Val d'Orcia is one of several geomorphologically distinctive areas in the large and diverse Region of Tuscany. Each of these areas has its fervent proponents. Many strongly prefer the rounded hills, dense vineyards, olive groves and woods characteristic of the Chianti area, between Florence and Sienna. The Maremma, both the Alta Maremma and the Bassa Maremma, once far off the beaten track and remote from the principal art cities, now draw visitors to their hill towns, thermal springs, Etruscan remains and nature reserves. Visitors enthusiastic for mountain vistas favour the Garfagnano, while the Mugello, home territory of the Medici, is a surprisingly wild area of castles and forests full of interest and within easy reach of Florence. The valleys of the Upper Arno - the Casentino with the Castello di Poppi - and the Upper Tiber Valley (Valtiberina), where Tuscany merges with Umbria, the towns such as Anghiari and Sansepolcro are characterised by their broad river flood plains and precipitous mountainsides. Of all of these, the Val d'Orcia is unique among the areas of Tuscany in having been accorded UNESCO World Heritage Site status and its advocates are perhaps the most fervent of all.

The Val d'Orcia or Valdorcia refers, strictly speaking, to the valley of the river Orcia but in general it refers to the area extending from the hills south of Sienna as far as the Monte Amiata. Nothing could differ more from Chianti, for example. The landscape in and around the Val d'Orcia is characterised by open vistas of ploughed and sown land that stretch over low hills to the horizon, punctuated here and there by clusters or rows of cypresses and umbrella pines, and isolated farmhouses. The crete senesi are areas of badlands that generations of farmers have brought into cultivation. Nothing has been easy here. The volcanic cone of Monte Amiata dominates the southern panorama.