The Town Of Valdobbiadene In The Veneto Region 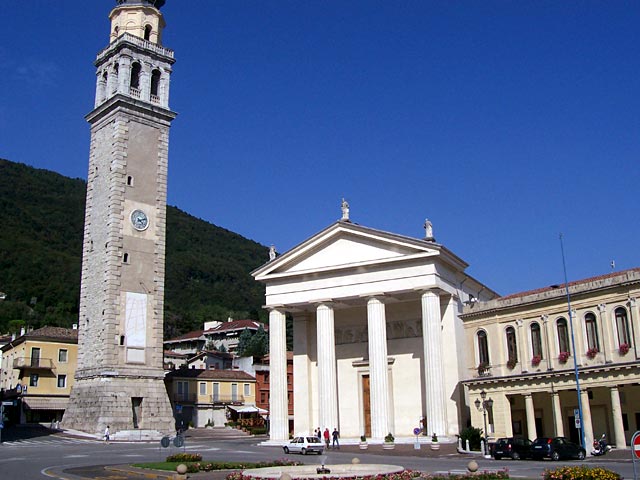 Valdobbiadene, a town located in a green valley at the foot of the pre-alp foothills and overlooking the Piave riverbed. In the center there is a large square surrounded by Neoclassical buildings including the Duomo, Municipality and majestic 18th century campanile. The city suffered heavy bombing during World War I when it was the seat of the Austrian-Hungarian command. Today it is the capital of Italian spumante and hosts the annual Forum dello Spumante in the splendid Villa dei Cedri.

As its ancient name 'Duplavilis' suggests Valdobbiadene most likely owes its name to the river Piave, or rather its position between the two branches the river used to flow along in earlier times.  The earliest evidence of its origin dates back to the 'Mousterian' Age, although the town is mainly known historically for its connections with the Bishop of Poitiers, St. Venanzio Fortunato, who was a famous biographer of the saints of the late Latin age.

The territory became a part of the Venetian Republic in the mid-14th century and was subsequently divided into 15 rural communities, each of which was governed by a democratically elected man from the head-families of the area.

With the arrival of Napoleon and eventually the Austrian control of the lands, the former structure of the area disappeared. Without a formal structure and with the Venetian nobility gone, the upcoming bourgeoisie class of merchants, clerks and land-owners were able to acquire the lands and thus gain large shares of the political power.

Following World War I, wine-production became an important economic field, a trend that still continues today. Valdobbiadene is now, along with the nearby Conegliano, considered the best place for Prosecco, a famous wine in the Veneto region. The Prosecco grapes grown on the hills here are used to produce such famous wines as the Valdobbiadene DOC Prosecco and the Prosecco Superiore Cartizze. Valdobbiadene has also been the site of the Italian committee for Spumante wines, “Forum Spumanti d’Italia”, for over 40 years.

HOW TO GET TO VALDOBBIADENE

Valdobbiadene can be reached by  regional bus from Montebelluno, car, or bicycle.

WHAT TO SEE IN VALDOBBIADENE