Interesting small town north of Vicenza, Monticello Conte Otto is along the main trek toward Sandrigo and Bassano della Grappa.  There is a new bike path being built along the old rail road, but it will only extend within the city limits.

Up until the 1200 the area that is now Monticello was mainly forest and swamp, due to the every changing of the local rivers. The actual community was formed in 1118, made up of three separate communities. The main commerce was agricultural, working the land of local feudal lords.  Later the area became know for ceramics (it is suggested that these skills came from Marco Polo's adventures in China).  Plus, the industry of textiles, the weaving of flax and hemp that lasted until the end of WWII.  After the Second World War the textile industry declined but many specialized small manufacturers have been established, many of these are in the jewelry and machine industries.

GETTING TO MONTICELLO CONTE OTTO

From Vicenza there are regional buses that pass through the community. 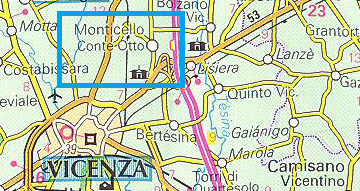 The Bike route from Vicenza to Marostica leads you near this community.