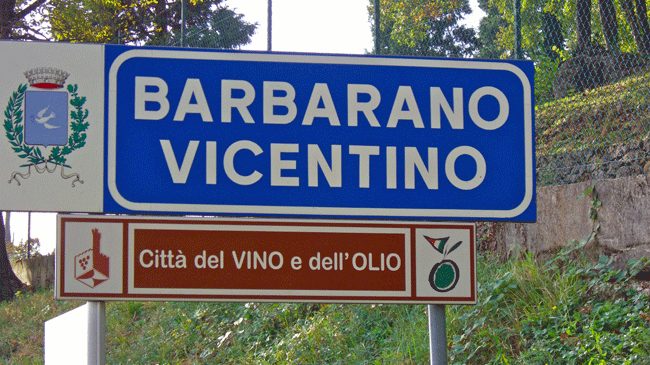 Barbarano is the hub of the Colli Berici wine production. There is a Gothic Palazzo dei Canonici, adorned with noble crest, that dates back to th 1300's when Venezian Republic controlled the area. The name of to the town probably comes from the Latin fundus Barbarianus, meaning; land or property of Barbarius', a Roman general who is noted to have controlled land in the area. Today the name Barbarano is associated with the light red wine Tocai Rosso.

Archaeological findings show the presence of a village in this territory long before the Roman era. Barbarano's castle used to be one of the most important in Vicenza during the Middle Ages: tradition says it was built in the 8th century, but it is first mentioned only in an imperial decree of year 1000 AD, when the Emperor bestowed the fief of Barbarano onto the Bishop of Vicenza. After having fallen for a short time into Ezzelino da Romano's hands, it was re-gained the Bishop who eventually lost control of the area to Verona's lords in 1312. They made of Barbarano the headquarter of a huge administrative district, and, after the wars between the lords of Verona and Padua, Barbarano and all of Vicenza became part of the Republic of Venice in 1404.