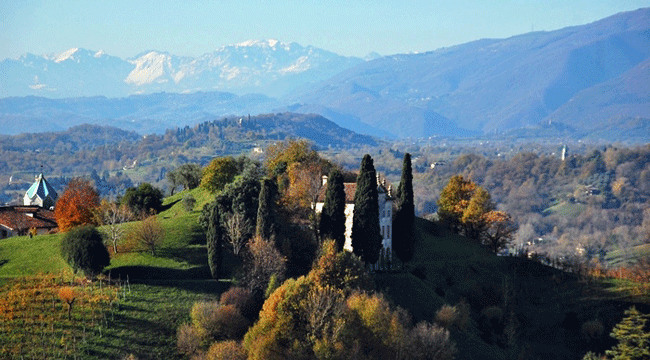 This Asolo Hills and Montello is located in the Treviso Province and made up from the foothills on the right bank of the Piave river, rising up from Montello to the slopes of the Grappa peaks.

The area is more typically associated with the history of WWI. At the foot of the Grappa Mountain, Valcavasia is home to Possagno, the birthplace of Antonio Canova who was buried here in a Temple that he himself designed. The house where he was born and the famous Gipsoteca gallery of plaster casts, which hosts a number of reproductions of his work, are open to visitors.

To the south is Montello, an oak wood dating to the era of the Serenissima Republic of Venice, that has inspired writers and poets through the ages: from Monsignor Della Casa who was inspired in the mid seventeenth century to write his renowned "Galateo of Manners", to the recent poems by Andrea Zanzotto.

The Asolo hills lie between the mountains and the river, and cradle the town dominated by the Medieval fortress and which is scored by alleyways, palaces and porticos housing works of great historical, artistic and cultural value, much loved by intellectuals around the world.

Main attractions such as the winged lion of Saint Mark towering above the sixteenth-century fountain can be seen in the square, which also provides access to the Castle, once the home of Caterina Cornaro, Queen of Cyprus, to the Palazzo della Ragione and the Cathedral. Dante mentioned these delightful lands in the Divine Comedy and Giorgione painted them in the sixteenth century.

This territory is marked by gently rolling hills and plains that run from the river to the mountain with rows of vineyards that alternate with coppice woods. Here important villas designed by Palladio such as the famous Villa Barbaro in Maser can be seen, and typical local products are available to try. The area's features prompted the realization of the Strada del Vino (Wine Road), the most recent of those recognised by the Veneto Region.