The Town Of Treviso In The Veneto Region 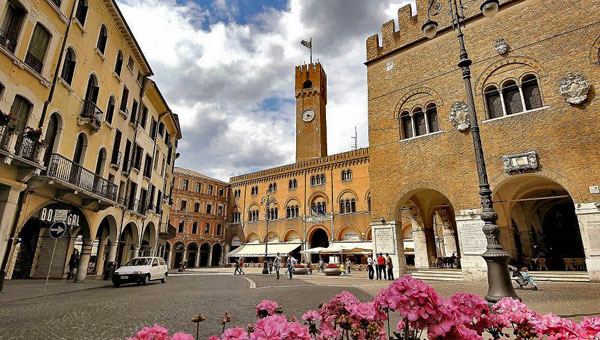 The remains of an ancient village found along the Sile river place the origins of Treviso in the Bronze Age (15th century BC). The city was inhabited by the Veneti starting in the 10th century BC, who were granted Roman citizenship in 49 BC.

In the early Middle Ages Treviso became a flourishing city under the Carolingians, when it became the capital of a March and had a mint. The year 1164 was important: it was then that the Emperor Frederick I recognized the city as a free commune. Thus began its most glorious period, Treviso extended its domain, adorned itself with new churches and buildings and held knightly feasts hosting poets and troubadours, which earned it the name of "Joyous and harmonious March". It fell under the tyranny of Ezzelino da Romano in 1237; from that point on the city passed from hand to hand, tormented by war and civil clashes for more than a century.

The population of Treviso joined forces with Venice in 1389 leading to a long and prosperous time of peace for the city. Treviso became filled with buildings and frescoes in Venetian Gothic style. In 1509 Venice decided to give the city new fortifications to be able to defend its territories to the north. The current walls and gates date back to this period.

Treviso fell along with Venice in 1797 to the aggression of Napoleon's armies. The city then fell under Austrian domain until 15 July 1866, when Italian bersaglieri liberated it, marking its annexation to the Kingdom of Italy. During World War II Treviso suffered heavy losses; in 1944 American bombing caused thousands of victims destroying many buildings and historic landmarks.

HOW TO REACH THE TOWN OF TREVISO

WHERE TO STAY IN TREVISO

WHERE TO EAT IN TREVISO