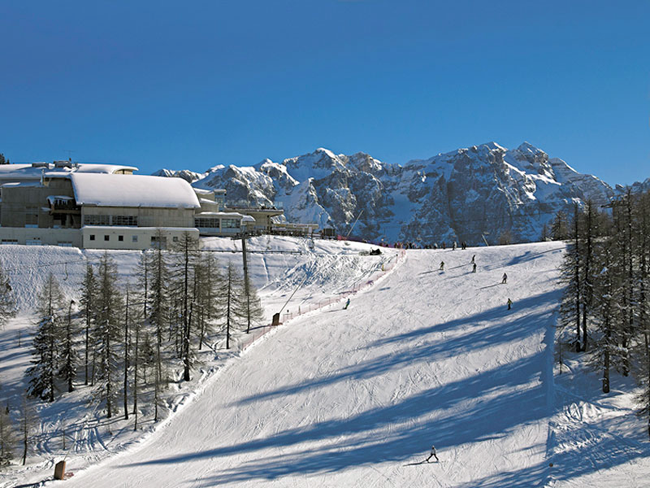 Folgarida ski resort is located in the Trentino Alto Adige region of Italy.  Folgarida is a great value resort that caters to all abilities. There are plenty of easy sunny slopes for beginners, and the area lift pass opens up 150km of skiing.  Folgarida is also connected to Madonna di Campiglio resort and Marilleva. Folgarida resort is about 4 km up the road to Passo Carlo Magna and is a vacation destination for lots of families. The area has a small and friendly feel and there is an abundance of entertainment taking place in the hotels throughout the day and evening.

There's several gentle blue runs fed by a gentle chairlift and 2 drag lifts at the top of the gondola leading up from Folgarida - all around Monte Spolverino nursery slopes area. Plus, there's a nice blue run through the trees back to resort to practice those new skills on as the week progresses.

With recent investment in the lift system, it's easy to hop over to the prestigious ski area in Madonna di Campiglio, covered on an area pass. If you fancy a high milage finish to the day, don't miss the run down from Orso Bruno - 9km back to Folgarida without any lifts.For those into high mileage, it’s possible to ski all the way from Orso Bruno back to Folgarida town (over 9km) without taking a single lift.

There's ample off piste opportunities around the entire area - look out for the off-piste itinerary around the back of Monte Spinale, local guides will be able to organise a trip to this area. For some 2km long, knee trembling blacks, try the steep Nera Folgarida and Nera Marilleva.

AFTER SKIING IN FOLGARIDA

The atmosphere is very Italian: relaxed and informal and generally quiet during the week. It is mainly centered around the hotels.
Activities

GETTING TO THE FOLGARIDA SKI RESORT 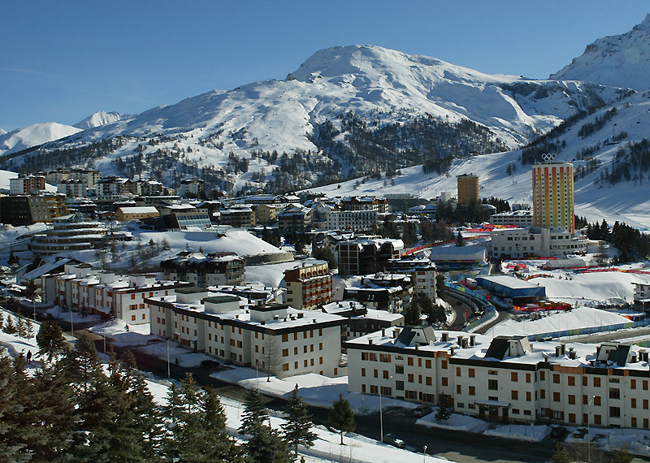 The Sestriere ski resort is located in Piedmont Region of Italy and along the border with France.  Sestriere is a fairly new resort built to take advantage of the higher elevations of it's northwestern facing slopes. It has gained popularity due to hosting the 2006 Olympics and World Cup races each year.  However, the location of the resort does not get regular snowfall and has to make use of snow making machines throughout the season.

The Sestriere ski area is a  popular weekend destination of residents in the city of Torino.  However, this is not the best resort selection of a ski vacation.  There is a varity of slopes with terrian for all levels of skiers.   The resort is also part of the France and Italian Milky Way area.  The ski ares of Sauze d'Oulx and Sansicario reachable by the Sestriere lifts.

When they built the Sestriere resort the urban planners did not lay out the support facitlites very well.  There is very little after ski activities in during the week but on the weekend the long lines and influx of day skiers liven up the village. 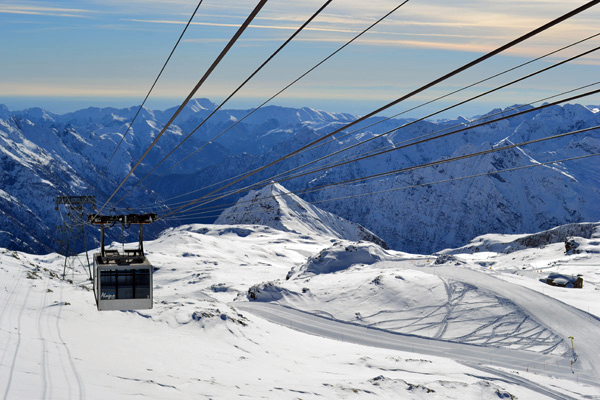 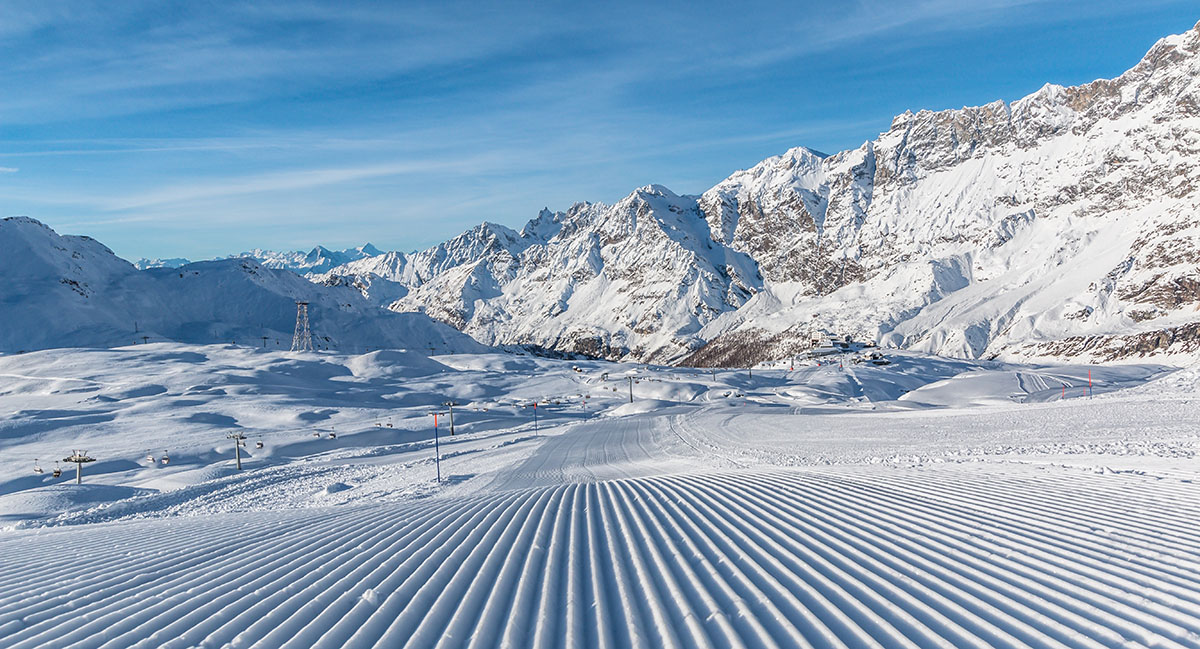 The Cervinia Ski Resort is located on the southern slopes of the Matterhorn.  Located in the Aosta Valley Region the Cervinia-Breuil resort is a less expensive alternative to Zermatt.  You can ski the Zermatt slopes from the Cervinia side.

This is an excellent resort for anyone who likes easy well groomed piste.  Cervinia resort is a perfect spring destination with plenty of sunshine.  If you are looking for bumps and power this is not the best destination.  There is some challenging terrain on the Zermatt side.  But staying on the Italian side you lose a lot of time to get over to these areas.

The village was re-named Cervinia when it was developed for skiing in the 1960's, but you will still find the original name of Breuil when you are searching on the map. There is not a lot to do in the evenings and your are about 24 km up the mountain.  For this reaon bad weather can shut down the resort in the harsher winter months, especially high winds. 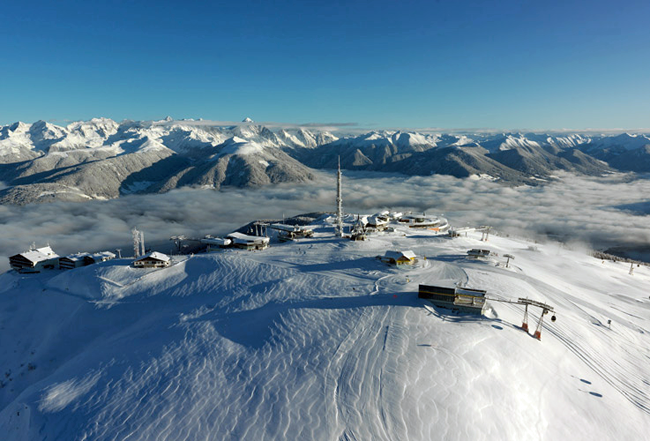 Plan de Corones is little-known outside of Italy and Austria but popular with locals because of its excellent intermediate terrain and  hi-tech lift system. The slopes have 100 per cent snowmaking, and it is used very well.

There several small resorts spread around the base of the mountains with lifts and runs forming a spider like network. San Vigilio is a pretty little village with its own little area of slopes separate from the main Plan de Corones area but linked by a cross-village gondola. On the other side of the mountain is Percha, now linked by lift and rail service from Brunico.

There are two great long runs with 1300m vertical that are always well groomed that run down to the town of Brunico. The Plan de Corones resort is great for beginner to intermediate skiers.  There is also plenty of options for the advanced skier to explore but very little off piste.  It is close enough to other resorts that you could get over to Corvara or the Sella Ronda for a day.

The only disavantages of the area is that the villages are very quiet for those looking for night life.  Also there is very little English spoken in the area and you should have a good grasp of German rather than Italian.  A great resort for a ski week but if you are a full day skier you could get bored after a few days.

HOW TO GET TO PLAN DE CORONOES SKI RESORT