Getting to the Amalfi Coast 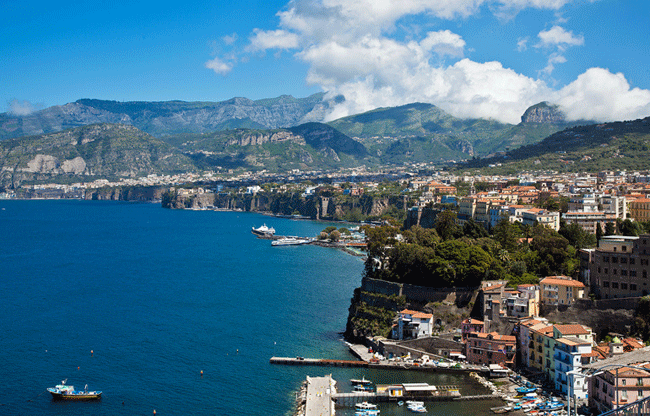 If you’re headed to Sorrento, Positano, or other towns on the northern part of the Amalfi coast you can take several modes of public transport from Naples.

Naples to Salerno by train

If your final destination are towns south of Amalfi or Salerno you can take a direct train from Naples to Salerno. The train ride takes less than 40 minutes. Once you arrive in Salerno, you have the option of taking the SITA bus to other towns on the Amalfi coast, including Vietri sul Mare, Maiori, Minori and Amalfi.

Naples to Sorrento by train

The Circumvesuviana train ticket from Naples to Sorrento costs €4.10, and takes a little over 1 hour to arrive. There will be stops along the way. This website provides the details and schedule.

As with Salerno, once in Sorrento, you can take the SITA bus to towns along the coast. This route is the cheapest option for getting to the Amalfi coast.

Note: From the Capodichino airport, you can take the Alibus to the main train station. It leaves every 20 minutes from the airport, and takes about 20 to 30 minutes. The cost of the ticket is €3. If you decide to take a taxi instead, the fixed rate is €16.

The Naples airport to Sorrento by bus

From the Capodichino airport in Naples, a bus runs directly to the Circumvesuviana train station in Sorrento. The journey takes about 1 hour and 15 minutes (depending on traffic conditions). Buses leave hourly, starting at 9 am and with the last one at 7:30pm. The ticket costs €10 and can be purchased on board. Check their website for the latest schedule and price.

The Naples airport to Vietri sul Mare and Salerno by bus

You also can take the bus from the Capodichino airport to Salerno. Note that though the cost of the one-way ticket is affordable (€7), it only has four departure times. This bus also stops at Vietri sul Mare and travel time is around 45 minutes.

Naples to Sorrento, Positano or Amalfi, by ferry is a great alternative to the Amalfi bus, and less crowded.

From the port in Naples (Moro Beverello, moro means pier), you can catch a ferry to Positano or Amalfi (via Sorrento). The ferries depart from Naples twice a day. They only operate in summer months, usually starting at the end of July. However, there are several ferries that operate throughout the year to Sorrento only: Alilauro and NLG (Navigazione Libera del Golfo). The trip takes about 40 minutes and a ticket is around 12 euro.

Note: From Capodichino airport, you can take the Alibus to Piazza Municipio.

Naples to the Amalfi coast, by taxi or private transfer

The most expensive, but fastest, option is a taxi or private transfer to Amalfi or Positano from Naples. Generally the fare should cost you about €120 to €150, one-way. From Naples, taxis charge a fixed rate, as per the tariff set by the City of Naples.

Getting to the Amalfi coast from Sorrento

While many people consider Sorrento to be on the Amalfi coast, technically, it’s not! And whether you’re using Sorrento as your base or just passing through on your way to other Amalfi coast towns, you’ll find these transport options helpful.

SITA buses operate daily and almost hourly from Sorrento to the Amalfi coast, with stops in Positano, Praiano and Amalfi, among other destinations. Here’s the schedule and various ticket options. This would be the best way of getting to Amalfi coast as it operates year-round.

The final stop for the bus from Sorrento is in Amalfi; if you are going to Ravello or towns south of Amalfi, you will need to switch to another SITA bus there.

Alilauro has ferries operating from Sorrento to Amalfi via Positano, but only from April 15th to September 30th.

Getting to other spots on the Amalfi coast from Salerno

SITA buses run frequently from Salerno to Amalfi, with stops in Vietri sul Mare, Maiori, Minori, and Atrani. If you plan on visiting the other towns on the Amalfi coast there is an integrated ticket from UNICOCostiera.

Ferries on the Amalfi Coast

The bus ride back to Naples contours the cliffs therefore not providing you with the spectacular views or if you suffer from car sickness easily you might want to consider a ferry ride. (www.metrodelmare.com) Ferry frequency varies with the season, but in general there around six daily between that opeate between Amalfi and Positano, four daily running between Amalfi and Sorrento, and five daily between Amalfi and Naples. Some Metro del Mare lines leave and arrive at the Molo Beverello (pier in Naples), others the Mergellina.

There are three other ferry companies serving the Naples Bay area and surrounding region: www.caremar.it, www.consorziolmp.it, and www.alilauro.it.