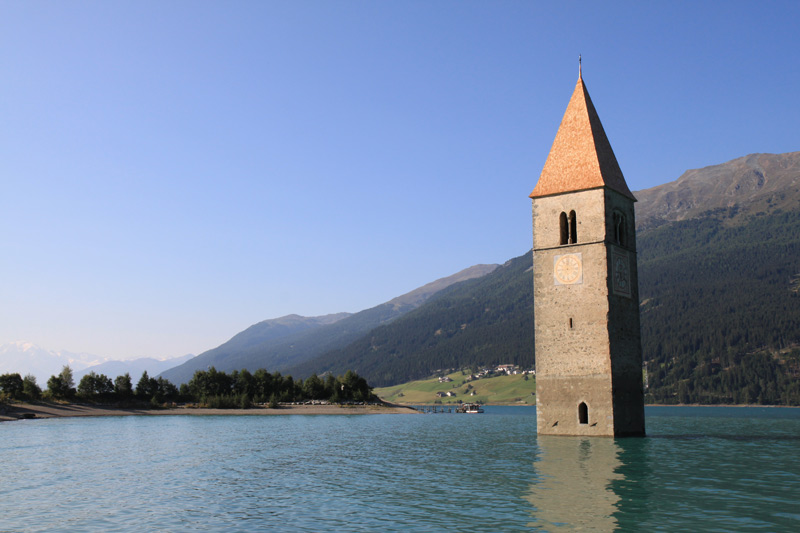 The Resia Pass sits at 1504 meters a.s.l., in the Italian Alps.  Resia Pass connect the Inn River valley of Austria, in the northwest, with the Val Venosta valley in the southeast. Since 1919, the border between Italy and Austria runs approximately along the watershed, the pass summit being completely on Italian territory. Before the Roman era, a path linked the valley of the Inn River with the valley of the Adige river.

The current Resia Pass was part of the Roman road Via Claudia Augusta, opened in 50 AD. Until the 19th century, the pass was an alternative to the passes of Graubünden. Unlike the wide and smooth southern side, the northern side has a steep and narrow bottleneck, the Finstermünzpaß at 1188 meters. Until 1854 the custom houses between Austria and Switzerland were found on fortified bridges of the Inn River at Finstermünz.

Between 1850-54, Carl von Ghega (who already had built the rail-road of Semmering, from Lower Austria to Styria, through Vienna and Graz) and Joseph Duile built a new road from the fortress of Nauders (1394m) to Cajetansbrücke near Pfunds (972m). This road leads along the Eastern, Austrian banking of the Inn, connecting the Austrians lands on Austrian soil. An additional mountain road leads from the Inn valley from the Swiss hamlet Martina in the Austrian Martinsbrück up to Norbertshöhe and Nauders, providing a shorter way from Switzerland to Italy compared to the longer road via Cajetansbrücke. In 1950, on the Italian side of the pass, the artificial lake of Resia was created, famous for the bell tower which emerges from the water in front of the village of Graun im Vinschgau.