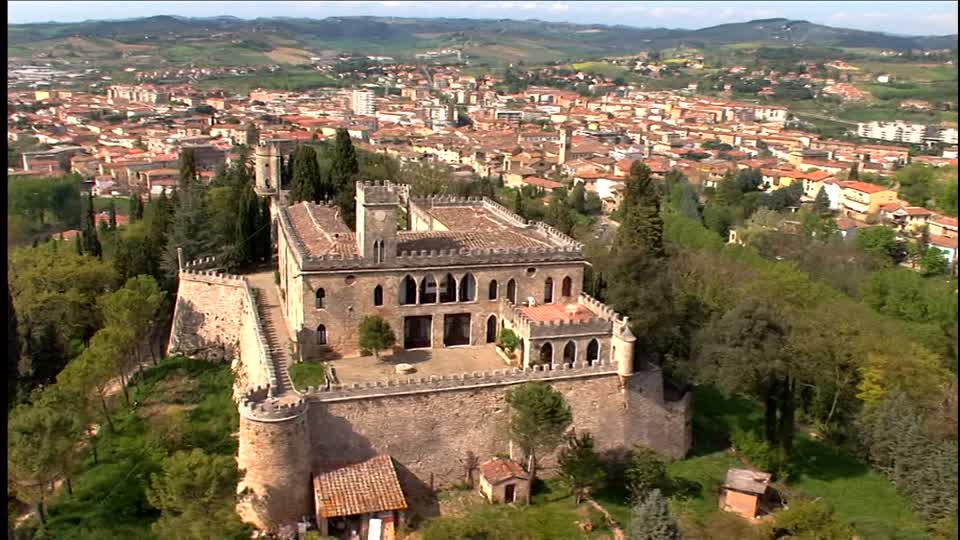 Poggibonsi is in the province of Siena and has a population of about 27,000 inhabitants. What is today’s town centre was the ancient “Borgo Marturi”, a holding of the abbey and of the Marturi castle, already established in the XII century. Its position is in fact enviable, being an unavoidable point of passage for the pilgrims on the Via Francigena, on their way to Rome, as well as a zone of boundary between the states of Florence, Siena and Volterra. Its enviable position was obviously at the cost of peace, as on many occasions the three cities didn’t hesitate in resorting to violence in order to take possession of the village.

For example, in 1115, the Florentines attacked and destroyed the Marturi castle. Such an event convinced Count Guido dei Guidi to build a new city, on the “Podium Bonitii” (Poggio di Bonizio), reserving possession of a part of this for the Siennese. And so, a centre of strong Ghibelline and Siena-loving connotations was born, immediately coming into conflict with Florence. In 1270, after the victory of Colle Val d’Elsa against the Siennese, the Florentine Guelphs attacked and razed the new city to the ground, prohibiting reconstructio.

Having returned to the settlement, re-named Poggiobonzio, the conflicts once again prosper and draw the attention of the Emperor Arrigo (or HenryVII ) who, in 1313, started up the reconstruction of the ancient castle that was to be called Poggio Imperiale, a project that was destined to fail following the Emperor’s early death. So a new era tormented by the wars with the Florentines and by the plague, opened for the people of Poggibonsi. The accession of the Medicis further compromised the fate of the city. Siena having fallen, Poggiobonzio first suffered a hard attack in 1529 by Clement VII’s Papal troops, and then surrendered to the Grand Duchy in the mid-16th century, subjugating itself to Florence together with the rest of the Siennese territory.

Modern times saw Poggibonsi slide from one occupation to another. After the Spanish, the Lorenas, then the French and finally the Italian royal troops, all take over control of the territory. In the 20th century, nevertheless, the town’s urban and social structure were greatly shaken up. The flourishing of the industrial and commercial activities, thanks to glass and the exportation of Chianti wine, provoke a demographic expansion of considerable proportions. The bombings in ’43 and ’44 definitively change the physiognomy of the town, quickly rebuilt but never restored to its ancient structure.