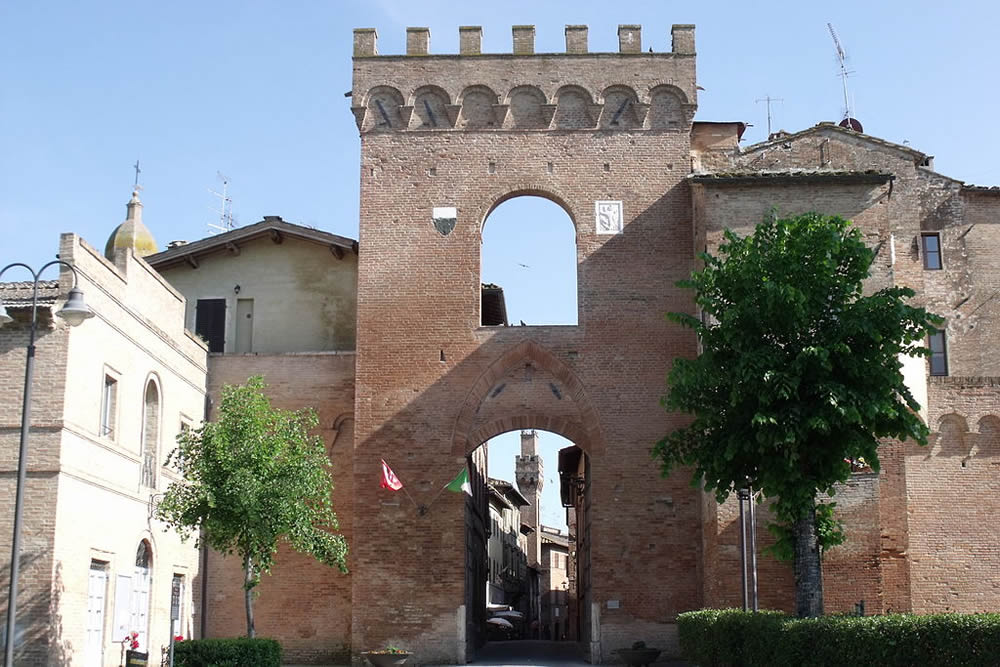 Buonconvento (from the Latina bonus conventus, "happy place") is mentioned for the first time in 1100. In 1313 the German emperor Henry VII died here. It was surrounded by a line of walls starting from 1371, carried on by the Republic of Siena to which it belonged until 1559, when it became part of the Grand Duchy of Tuscany. It was annexed to Italy in 1861.

The local museum of art houses works by Duccio di Buoninsegna, Pietro Lorenzetti, Andrea di Bartolo, Matteo di Giovanni and other Tuscan painters, taken from local churches. The church of Sts. Peter and Paul has a Madonna Enthroned with Child by Matteo di Giovanni (c. 1450) and a fresco of the early-15th century Sienese school. The fortified pieve of Sant'Innocenza a Piana dates from the 13th-14th centuries. Most of Buonconvento's frazioni house medieval or Renaissance castles. The church of St. Lawrence, in Bibbiano, has a cyborium by Ventura Salimbeni.

The main economic activities of the area are all in some way connected to agriculture, in particular to the cultivation of cereals, grapes, olives, flax and hemp. Mulberry trees are also grown for silk worms which in recent years have proved to be a real gold mine for the town. The Val d’Arbia also boasts many areas where the famous white truffle is harvested. The main industry in the area is connected to tobacco manufacturing and producing ceramics for tiles.

The Museo della Val d’Arbia (Val d’Arbia Museum) has recently been opened in the centre of Buonconvento. Here, visitors will find works of art by Sano di Pietro and Matteo di Giovanni. Other sites of interest in the town include the Museo di Arte Sacra (the Museum of Sacred Art), Palazzo Ricci, the church of San Pietro e Paolo (Saint Peter and Saint Paul) and the Oratorio di San Sebastiano (the Oratory of Saint Sebastian).

There have been settlements on the site where Buonconvento is today since ancient times. The first documented evidence of human habitation here though dates back to the end of the twelfth century. It is documented as being an important town for trade, thanks to its strategic position on the two rivers, the Arvia and the Ombrone.

The pilgrims’ route that travels from northern Europe to Rome, the Via Francigena, also passes close to Buonconvento and would have brought a lot of trade to the town. The first written reference to the town appears in a document dated 1191 in which the King of France, Filippo Augusto, notes passing through ‘Bon-couvent’ on his way back from the crusades.

Buonconvento became an even more important strategic town during the period when it was under the rule of Siena in the thirteenth century. In 1289 it was invaded by Sienese Ghibellines and occupied by imperial troops led by Enrico (or Arrigo) VII of Luxembourg. It was here in Buonconvento on the 24th August 1313 that the emperor died – his death signalled the end of the hopes of the Ghibelline forces.

After having been captured for a time by the army of Perugia, Buonconvento was fortified by the Sienese between 1371 and 1385. The old town centre is still surrounded by the splendid walls built in this period to defend the town. In 1480 Buonconvento took on Sienese citizenship. When Siena fell in 1559, the town (along with the rest of Siena’s towns) became part of the Grand Duchy of Tuscany which was ruled first by the Medici and then by the Lorena.