Things to See in Tuscany 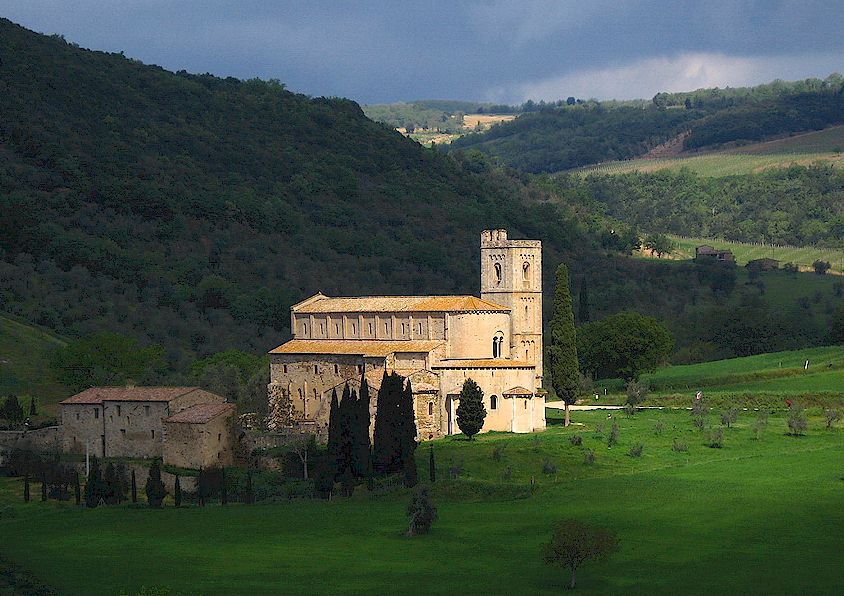 The Abbey of Sant'Antimo, considered one of the most beautiful Romanesque churches in Italy, is located only 9 km from Montalcino.

According to tradition, in 781 Charlemagne was returning from Rome along the Via Francigena. While camped near Monte Amiata, many in his court and army were struck down by plague. During the night, an angel appeared to the Emperor in dream and recommended that he pick a particular grass, dry it and then make an infusion with some wine and have it drunk by the soldiers. He did this and the army was cured. The grass is known to this day as "Carolina". In return for an end to this scourge, the Emperor promised to found the abbey.

According to historians, the foundation goes further back, to the Longobards and the Monastery of St. Savior (Salvatoris) at Monte Amiata. It is possible that the Abbey of Sant'Antimo was constructed on the site of a Roman villa and it is known with certainty that in the 4th and 5th centuries the village of Castelnuovo dell'Abate, on the hills nearby, was an important inhabited centre, endowed with a parish.

The monastery of Sant'Antimo was in existence in the year 814, as indicated by a document from one Ludovico the Pious that endows the abbey with gifts and privileges. In the 9 C, the abbey faced financial difficulty, to the point that in the 877 Charles II, "the Bald", entrusted it to the Bishop of Arezzo, with the obligation to maintain 40 monks there at his own expense. From the 10 C, the abbot of the monastery was also the Count Palatino, a public position of great importance conferred by the Emperor.

In 992, according to a deed emanating from Pope John XV (985-996), the monastery passed into the direct jurisdiction of the Apostolic See. The year 1118 saw the beginning of the golden years of Sant'Antimo. Count Bernard degli Ardengheschi surrendered his entire patrimony in goods and property, including the Abbey, "in toto I reign Italic et in tota Tuscie marks" to Hildebrand, son of Rustic. A testimony to this exceptional donation was engraved on the steps of the altar as a perpetual memorial of the event. The Abbot Guidone (1108-1128), who received the donation, immediately initiated the great era of the construction of the new church, the Abbey of Sant'Antimo. The apse of the original 9th century abbey still stands alongside, and is dwarfed by, the new 12 C. The Abbey became the most powerful monastic landowner and foundation in Tuscany, via its imperial connections and gifts from those travelling the nearby Via Francigena, the pilgrims' route to Rome. At its height, the Abbey owned large tracts of eastern Tuscany from Lucca in the north to Orbetello in the south.