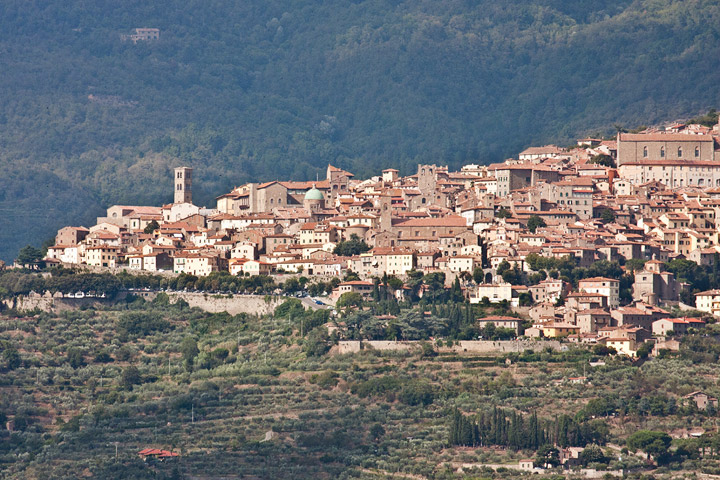 Cortona is an attractive place to spend a day or two with great art, great atmosphere, stupendous views to Lake Trasimeno and the Val di Chiana. Cortona is a small but fascinating city in the province of Arezzo, Tuscany, central Italy, situated on a commanding hill, and overlooking Lake Trasimeno. Its cyclopean walls reveal its Etruscan origins. It was one of the twelve cities of Etruria and in its vicinity many Etruscan ruins and tombs may be seen. Cortona sided against Rome until 310 B.C. when Fabius Rullianus defeated the Etruscans and took Perugia. Perugia, with other cities, including Cortona, then made peace with Rome. Later Cortona was destroyed by the Lombards but was soon rebuilt. In the 14 C, it was governed by the Casali and afterwards became part of the Grand Duchy of Tuscany.

Many famous men were born or lived in Cortona, among them Brother Elias (Elia Coppi), the famous companion of St. Francis of Assisi, and later Vicar-General of the Franciscan Order; Cardinals Egidio Boni and Silvio Passerini; the painter Luca Signorelli; the architect and painter Pietro Berrettini (Pietro da Cortona). St. Margaret of Cortona (1248-97) was born at Laviano (Alviano) in the Diocese of Chiusi, and became the mistress of a nobleman of the vicinity. On discovering his body after he had met a violent death, she repented and, after a public penance, retired to Cortona, where she took the habit of a Tertiary of St. Francis and devoted her life to works of penance and charity. Leo X permitted her veneration at Cortona, and Urban VIII extended the privilege to the Franciscan Order. Benedict XIII canonised her in 1728. Her body rests in a beautiful sarcophagus in the church dedicated to her at Cortona.

The town is not at the top of a mountain, but about half way up, with views of the surrounding landscape below. Unlike many hill towns, Cortona is worth visiting for its art alone. The Museo Diocesano has a small but interesting collection including powerful works by Signorelli and Fra Angelico. The Museo dell'Accademia Etrusca, housed in a former palace, has an eclectic collection of paintings, Etruscan artifacts and jewelry, and Egyptian mummies.

Cortona may be accessed by rail: the closest station is Camucia-Cortona, about 10 km away, at the bottom of the hill. There are direct trains from Florence, Rome, and Foligno (by way of Perugia).

There are lots of cafés for lunch, or assemble a picnic and dine al fresco. Cortona's San Marco hostel, housed in a remodeled 13th century palace, is one of Italy's best (Via Maffei 57, tel 0575-601-392.