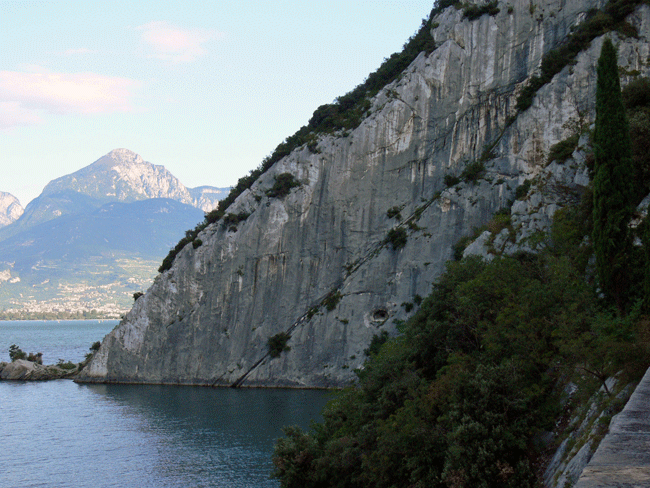 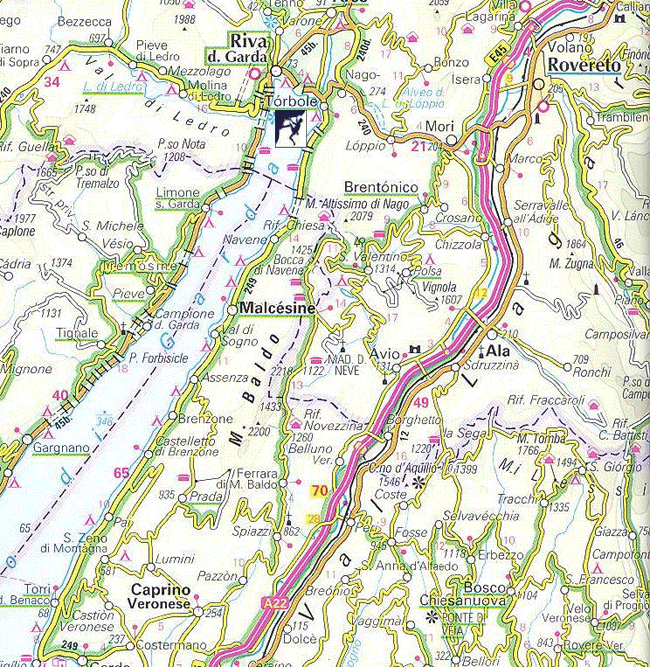 Serrada is a small crag located in the Pre-Alps, at 1250 meters elevation, making it a good location for the hotter months. The crag is a vertical sheer of Grey limestone that offers 36 routes, to date, ranging from 6a to 7b.  There is still room for future development and the quality of rock makes climbing enjoyable and changeling on small edges.  Good finger strength and technique are demanded.

From the A22 motorway exit Rovereto Sud head towards Serrada by car 28 km, then 5 minutes on foot.
Exit from the Autostrada Rovereto Sud and follow the indications for Rovereto. After 1.5 km turn right on the main road towards the centre of Rovereto and pass the commercial centre (Millennium Centre). At the second roundabout turn left in the direction of Trento SS 12 and take the left-hand land. Continue straight on, until the large roundabout at the train station (from the motorway's exit A22 Rovereto Sud 7 km). Turn right and follow the signs for Centro and SP2 Serrada- Folgaria. Take the SP2 Serrada-Folgaria and continue for nearly 19 km, passing through the various villages of the Comune di Terragnolo. After passing the sign "Magnifica Comunità di Folgaria", the Restaurant Cogola can be seen on the curve. Park the car on the right after 50 meters in a large parking area. From here enter via San Rocco on the extreme right, and continue for another 20 metres shooting off at the first curve on the right. Follow the track behind the Ristorante Cogola, and after 100 metres the track becomes a descending path that enters into the woods leading to the crag. 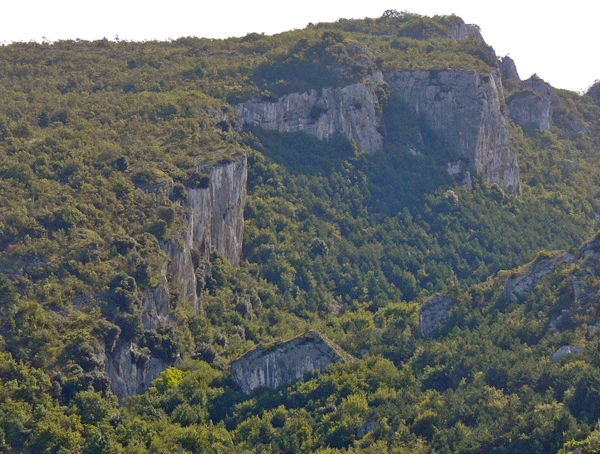 The Rock Climbing site known as Nago is located just west of the small town of Nago.  The town sits overlooking the Lake of Garda (Italy's largest lake) and is perhaps the second most visited climbing site in the area.  The climbing site offers over 120 routes at average grade of 6b, so this attracts lots of climbers.  There are plenty of lower grades to work on and improve your skill levels and the location is very scenic.

From Arco by car 7,5 km (or 9,5 km), then 5-10 minutes on foot.
From the bridge over the river Sarca follow the SS240 for Rovereto. Reaching the roundabout at Nago continue straight ahead, passing the Hotel Rubino after the traffic lights, turn right following the indications for Strada Monte Baldo. Continue for 1 km passing through the vineyards to reach the junction signposted Capitello S. Giuseppe.
For the lower sectors: enter the track on the right and continue for 400 metres until reaching a convenient parking spot next the Ranch house. Leave the car and continue along the Sentiero della Pace for 300 meters. At the first fork turn left (signposted Malga Zures) and continue ahead until arriving at a wall below the first lower sector and Mangusta sector. From here it is easy to reach sectors la Mandria and Centrale (and the other sectors).
For the higher sectors (Spleen, Il Tasso and I Ciclopi): once reached the junction marked by the Capitello S. Giuseppe continue ahead along the tarmac road, climbing towards Monte Baldo and passing through olives and pines with fine views across Lago di Garda. After 2 km park on the left by the side of the road directly in front of the top sectors. Leave your car and head towards the bend and go into the woods. Follow the evident path always straight and in 5 minutes reach Sector I Ciclopi and successively to the other sectors Il Tasso, Spleen and Central. 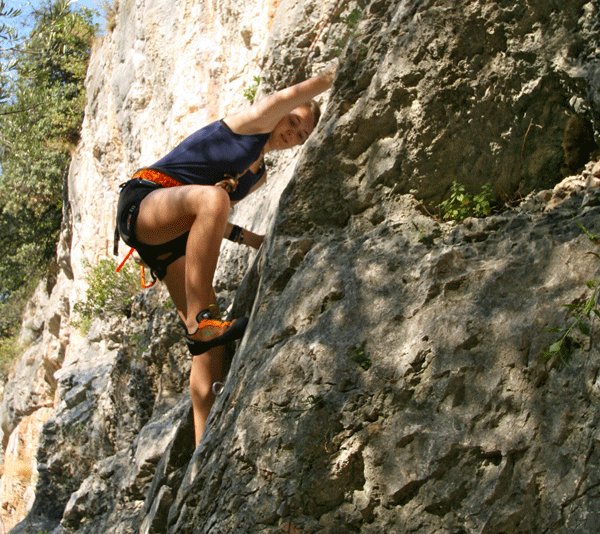 Massone is still one of the most popular climbing sites in Italy.  If you are in the Arco area you will want to head up to this multi-colored wall, (the other name for the Massone area is Policromuro, which translates to multi-colored wall).  A solid grey and red striped limestone wall with over 130+ routes ranging from 5a to 8c.  This is a great mid-season area or winter site, otherwise the rock tends to get slippery on hotter days due to the polished rock.  In the summer it is best to climb in the late afternoon, and in winter it is best to climb early morning.

From Arco by car 2.8 km or 3.5 km (Sector Pueblo).
From the bridge over the river Sarca follow the SS45 in the direction of Trento - Madonna di Campiglio. After 600 metres turn right for Massone/Falesia Policromuro and follow indications for Falesia Policromuro. Once in the village enter Via degli Olivi (a narrow road) leading to the olive groves. Continue following the signs to Policromuro until parking where the terrain levels out (10 parking places). This is ideal for the lower sectors, for the other sectors continue another 200 metres to a smaller parking area at the base of sectors A and B which has space for a further 8 cars. For the sector Pueblo continue along the road and after the third turning on the left there is a small lay-by. 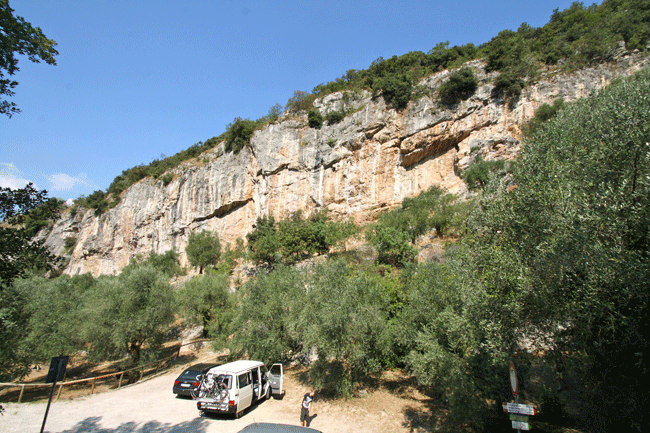 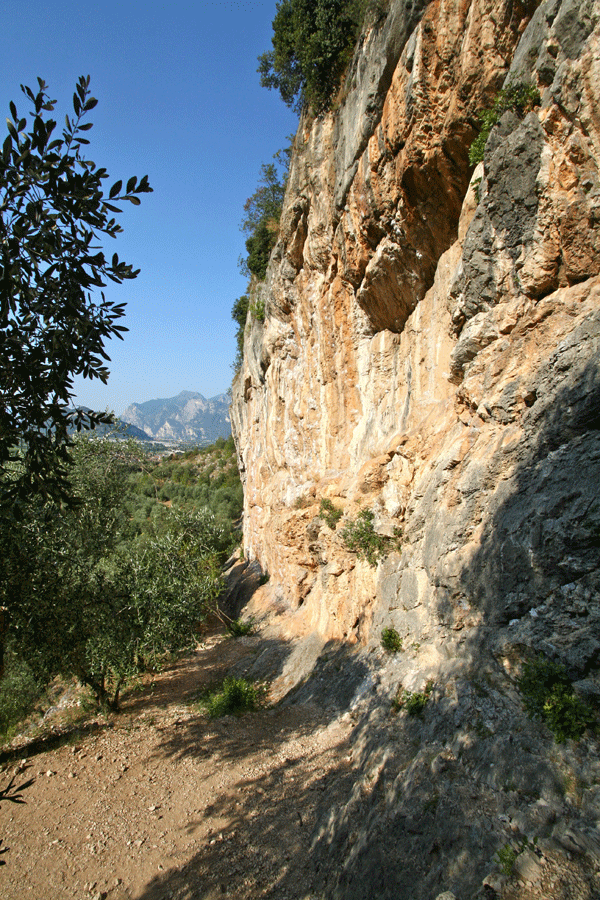 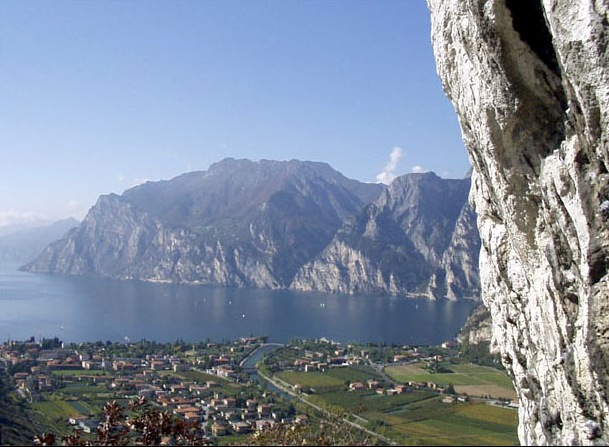 Arco has a mild climate and has a huge selection of climbing routes from single pitch to 300m long in a wide range of grades. Climbing is possible throughout the year, even if the south facing crags can be too hot in the summer, there is plenty of selections that are cooler. The best time to climb in Arco is spring and autumn.

The Lake Garda area offers a great place for windsurfing, mountain biking and hiking. All this together, combined with the fact that Lago di Garda is positioned near a great number of big cities makes the whole area a very popular place for holidays and weekends. The area is crowded with tourists during August and during weekends. Because of its popularity Arco has a lot of Hotels, camping grounds, restaurants and bars, so there is no problem to find food and a bed to sleep in though you have to book before leaving during the summer.

Arco has a long tradition of hard rock climbing,and the first international climbing competition was hosted in 1986. Every year in September the "Rock master" is held.. The are a couple of indoor bouldering room for rainy days.