The Padova Province developed several marked and sign posted bike paths and routes. The city information center has some handouts of suggested routes. There, are some good routes suggested but the information is not always the best route for a visitor and most routes tend to be away from what you wish to see. That being said, there are plenty of great things to explore in the area and Padova and many of its walled cities and villas should be on your ride list when in the Veneto Region. 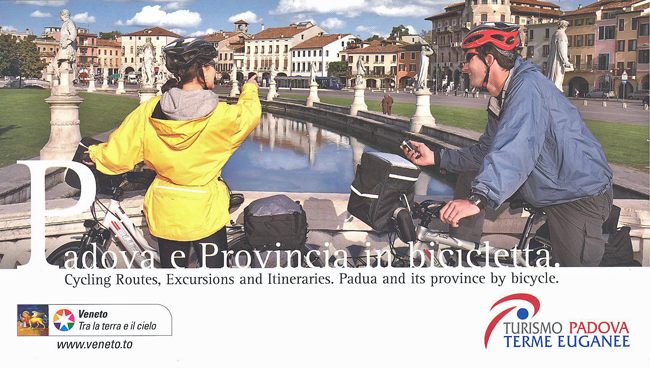 The Map below shows the better riding in the Padova province. 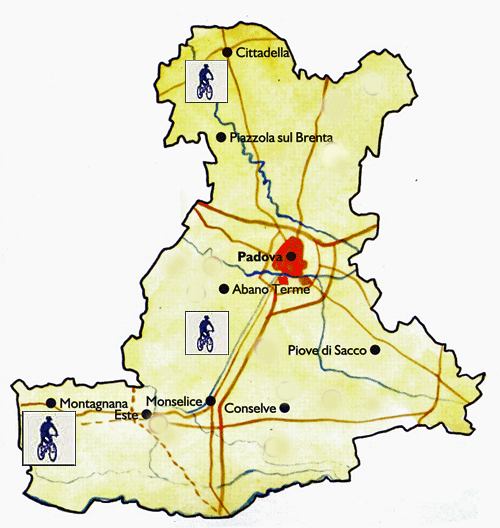 GREAT PLACES TO RIDE IN THE PADOVA PROVINCE

Colli Euganei: These volcanic hills offer several bike routes to enjoy. Located just south of Padova and along the main train line, these hills make a great day trip.
Cittadella: Walled city to ride to just north of Padova, a great stop over on your way toward Bassano del Grappa.
Monsèlice to Chiaggo: Riding from Padova or Monsèlice toward Chiaggo there are a couple of interesting points to visit, including a few bicycle factories south of Piove di Sacco.
Montagnana: Great walled city to ride to from Monsèlice via Este of lower across the plains.
Monte Madonna Bike Climb From Vo, Padova Province