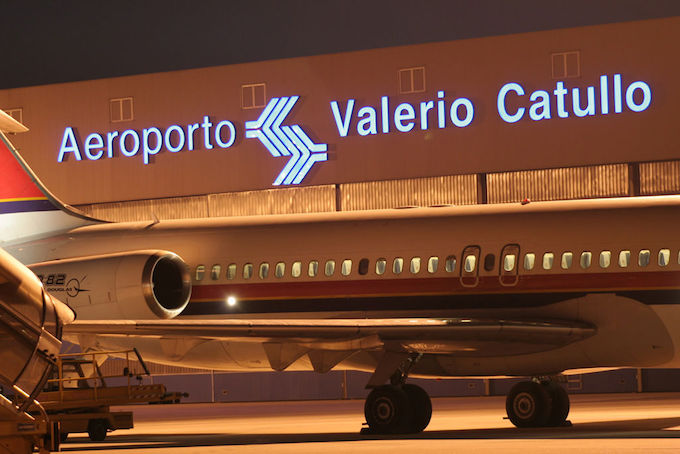 Verona Villafranca Airport , also known as Valerio Catullo Airport or simply Villafranca Airport is an airport located southwest of the city of Verona, Italy. The airport is situated at the junction of motorways A4 and A22. The airport serves a population of more than 4 million inhabitants in the provinces of Verona, Brescia, Mantua (Mantova) and Trentino-Alto Adige/Südtirol.

Verona-Villafranca Airport is equipped with a fog-dispersal device, which remains the best solution available in Italy and abroad to date, so that flight operations could continue during times of low visibility. This system has been in operation since 2003 and allows pilots to land in visibility as low as . The runway is certified for ILS Category IIIb approach. Terminal 1 is used solely for departures and Terminal 2 for arrivals.

A shuttle bus service, "Aerobus" operated by ATV, connects Verona-Villafranca Airport directly with Verona Porta Nuova station. As of 2014, this Aerobus runs daily between 6 am and 11 pm and departs every 20 minutes. Journey time takes 20–25 minutes. link link Between March 2013 and December 2014, a direct shuttle bus service ran daily between Mantova railway station and Verona-Villafranca Airport, connecting the city with its closest international gateway. This service was provided by APAM. The journey took 45 minutes. This service ceased operation on 1 January 2015. link During the summer months (June to September), ATV (Verona) buses 164, 183 and 184 additionally provide hourly connections between Verona-Villafranca Airport and major communes along Lake Garda/Lago di Garda.

PORTA BORSARI IN THE CITY OF VERONA ITALY

Porta Borsari is an ancient Roman gate in Verona, northern Italy. It dates to the 1st century AD, though it was most likely built over a pre-existing gate from the 1st century BC. An inscription dating from emperor Gallienus' reign reports another reconstruction in 265 AD. The Via Postumia (which here became the decumanus maximus) passed through the gate, which was the city's main entrance and was therefore richly decorated. It also originally had an inner court, now disappeared. The gate's Roman name was Porta Iovia, as it was located near a small temple dedicated to Jupiter lustralis. In the Middle Ages it was called Porta di San Zeno, while the current name derives from the guard soldiers which were paid the dazio (Latin bursarii). The façade, in local white limestone, has two arches flanked by semi-columns with Corinthian capitals which supports entablature and pediment. In the upper part is a two-floor wall with twelve arched windows, some of which are included in small niches with triangular pediment.

PONTE PIETRA IN THE CITY OF VERONA ITALY 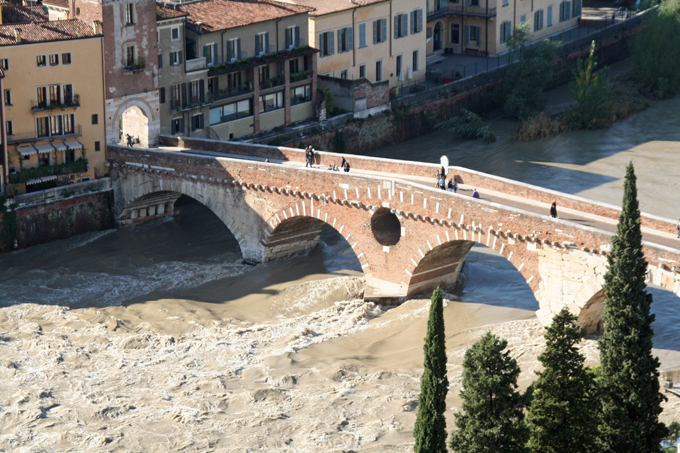 The Ponte Pietra ( "Stone Bridge"), once known as the Pons Marmoreus, is a Roman arch bridge crossing the Adige River in the city of Verona, Italy. The bridge was completed in 100 BC, and the Via Postumia from Genoa to Aquileia passed over it. It is the oldest bridge in Verona. It originally flanked another Roman bridge, the Pons Postumius; both structures provided the city (on the right bank) with access to the Roman theatre on the east bank. The arch nearest to the right bank of the Adige was rebuilt in 1298 by Alberto I della Scala. Four arches of the bridge were blown up by retreating German troops in World War II, but rebuilt in 1957 with original materials.

ARCO DEI GAVI IN THE CITY OF VERONA ITALY 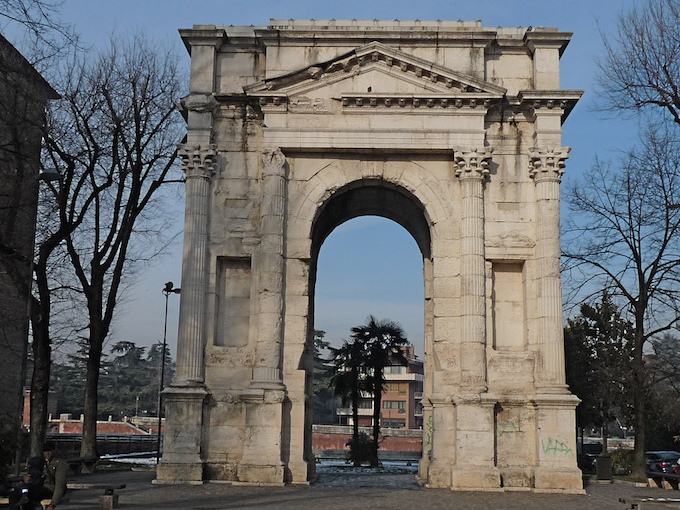 The Arco dei Gavi is an ancient structure in the city of Verona, Veneto Region Italy. It was built by the gens Gavia, a noble Roman family who had their hometown in Verona, at the beginning of the Via Postumia, the Roman road leading to the city. During the Middle Ages it was used as a gate in the walls. The arch was commissioned to architect L. Vitruvius Cerdo in the 1st century AD, likely during the reign of Tiberius. The arch was erected by a prominent local family, the Gavi. It putatively stood at the beginning of the Via Sacra or via Postumia Now , Corso Castelvecchio,

A stone contained an inscription stating : Lucius Vitruvius Libertus or Cerdon Lucius Vitruvius'' architect. Later scholars often mistook this for someone with an link to the famed architect Vitruvius. The flanking niches appear to have held statues of family members. In the Middle Ages, during the communal age of Verona, the city's council used it as an entrance gate when it was decided to surround Verona with a line of walls. During the Napoleonic rule in Italy, the French engineers demolished it. Its ruins were moved to a square and then to the Arena.

ROMAN THEATRE IN THE CITY OF VERONA ITALY 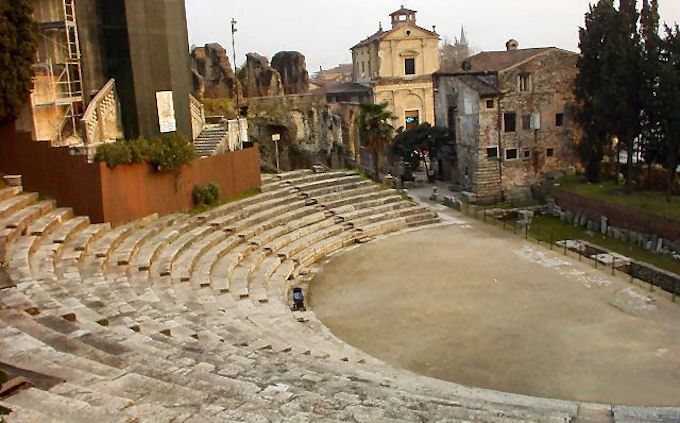 The Roman theatre of Verona (Teatro Romano di Verona) is an ancient Roman theatre in Verona, northern Italy. It is not to be confused with the Roman amphitheatre known as the Verona Arena. The theatre was built in the late 1st century BC. Before its construction, two walls were built alongside the Adige River, between the Ponte di Pietra and the Ponte Postumio, to protect it against floods. Today only remains of the edifice are visible, recovered starting from around 1830. They include the cavea and the steps, several arcades of the loggias and remains of the stage. Part of the cavea was occupied by the church of S. Siro, built in the 10th century and restored in the 14th century. At the top of the hill there was an ancient temple, built on a series of terraces.