Ai Falconi is one of the newest climbing areas in the area around the city of Verona.  In the same area as the Ceredo Climbing Area and near the town of Ceredo, Ai Falconi offers two smaller sectors with about 20 climbs each.  The area sits higher up the ridgeline above the village of Ceredo and is in the sun most of the day.  A great place to check out if you are climbing in the area for a few days.

Routes are listed left to right 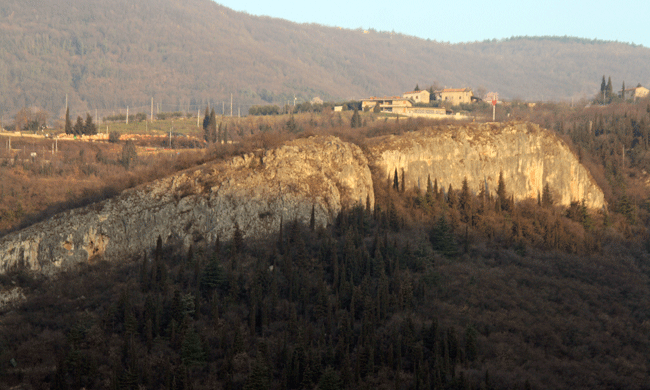 Stallavena Rock Climbing site is located in the Verona Province of the Veneto Region.  A great site for beginner climbers and families, utilized by the local Climbing Club Italy and a caving group for training.  Sitting just north of Verona it is worth a couple of hours visit before returning to explore the city.

This site has been a training ground for local climbers and climbing schools.  Until Cerado was developed Stallavena was the primary site north of Verona.  The cliff offer single pitch climbs on vertical and less than vertical walls.  There are no major overhangs at this site and the problems tend to be one move crux routes.  There are several easy routes, but attention needs to be paid to the fall area and distance between bolts.  A nice site for climbers under the 6c level but more advanced climbers could get bored quickly.

GETTING TO THE STALLAVENA CLIMBING AREA

Stallavena is reached by provincial bus from Verona to Bosca Chiesanuova, getting off at the Stallavena stop you can walk to the cliff in 15-20 minutes.

If you are driving you will need to reach the Verona Est exit and follow the signs toward Grezzana and Bosco Chiesanuova.  In about 10 km you will actually see the cliff on your left, exit the main road at Stallavena and follow the signs to the Chiesa.  Driving up the hill until you reach the Chiesa where you can park, then walk back down the road to the first turn where you will find a trail leading to the center section of the climbing site. 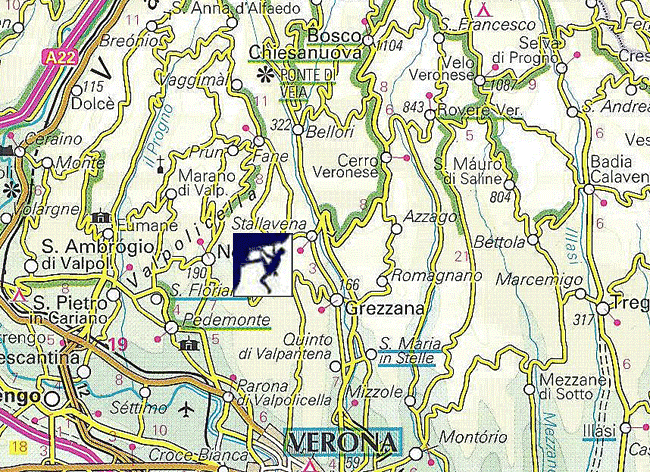 You can find plenty lodging in Verona, but there is also a hotel in Stallavena, this is not a bad place to base yourself the explore other crags in the Verona area.  You can still camp above the cliff area if you maintain a low profile and no fires.  For a guide book and general information go to the Alpino Bar near the centre.

Located between Vicenza and Verona this small area in the Veronese hills offers a few fun climbs to explore. The routes site near an old walled castle and the area is known for some good red and white wines. Worth knowing about the area if you happen to be passing by.

Climbing Guide to the Verona Province

The Verona province is the third best province in the Veneto to climb after Vicenza and Belluno. There are several well developed cliffs in the Lessini mountains north of the city of Verona, sites on the eastern shores of Lago di Garda, and within the Adige valley as it runs north toward Trento. WHAT IS THE CLIMBING LIKE IN THE VERONA PROVINCE OF ITALY Most of the cliffs that have been bolted in the Verona Province are limestone that has been craved out during the Ice ages. So you will find more crimping and side pulls rather than finger pockets. Most bolted cliffs are one pitch sport climbing routes, but there is also a few multi pit routes in and Adige Valley. There is no bouldering fields in the Verona Province, but there are a few small areas to traverse and climb off the rope. Due to this lack of bouldering areas there are a few very good indoor facilities in or near Verona, the best being Kings Rock indoor gym.

Contact us for route listing and more information about this site

Mailto:This email address is being protected from spambots. You need JavaScript enabled to view it.

Small wall near the town of Rivoli, seems to be part of an old mining area. The routes are bolted well and routes are fun to climb. The site was worth a day to visit if you are passing by the area.