The Province of Treviso is still called by its ancient name “Marca,” a Medieval term used to indicate the borderlands that during the First World War were the backdrop for heroic events. The area is marked by the waters of the Piave, Sile and Livenza Rivers, charming fluvial landscapes that intermingle with pretty hills and thriving fields that are dotted with elegant and stately homes.

The Capital the city of Treviso  is described by poets as a città cortese ("courteous city"), a calm and peaceful atmosphere that induced 18th-Century Venetian aristocrats to choose the Treviso area as their ideal vacation spot.

The Regional Natural Park of Sile strikes the eye as it moves along the entire length of the river, here traversing a variety of landscapes: humid and marshy areas close to the source, tortuous and rough parts nearer to Treviso, and lagoon landscapes near the estuary. The diversity of landscapes and ecosystems is the perfect habitat for a rich variety of avifauna and wonderful little natural oases, like that in Cervara. The mystic charm of the old villages and the intriguing traces of ancient times enchant visitors on a daily basis.

Finally, the northwestern section is characterized by various peaks that slowly transform into green hills, complete with vineyards and olive groves. Amongst these is the Montello Peak, a mountain of glacial origins, wholly-covered with oak trees and custodian of a precious history both ancient and recent. The heavily-wooded Altopiano (Plateau) del Consiglio is also known as “Bosco della Serenissima” (the Woods of the Most Serene Republic), given that it was the main source of wood for the building of the Venetian Republics ships.

The northern Marca (where the Piave borders with the Belluno Province) is wine country, defined by long stretches of vineyards and the highly-prized wineries of Conegliano and Valdobbiadene.  The landscape of the eastern area is characterized by large woods, water courses, vineyards and, without a doubt, a mesmerizing history. 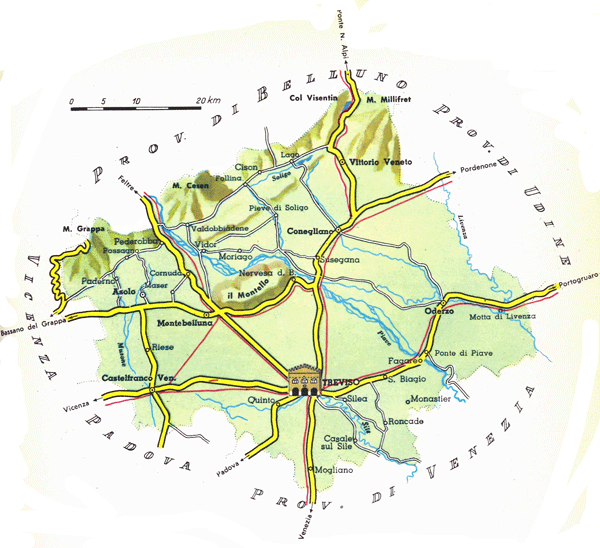 The province of Treviso is crossed by two significant rivers: the Piave and the Sile. In addition to the capital city, sung by the poets as a "gracious city", also noteworthy are the picturesque towns of the province: Castelfranco Veneto, Vittorio Veneto, Asolo, Maser, Conegliano, Valdobbiadene, Montebelluna, Oderzo, Portobuffolè and Possagno.

The Natural Park of the Sile River offers a great naturalistic experience, concealing small populated areas of exceptional historic and artistic value, such as Paese, with its Casa Quaglia, bearing witness to one of the oldest architectural villa styles of the Treviso area. The religious traditions and numerous villas have characterized the history, culture and art of this province. Among the dwellings of particular interest is the 17th century Villa Albrizzi Franchetti in Preganziol, which became the center for an Academy and a destination visited by artists and poets such as Foscolo, Byron, Pindemonte and Canova.

In Montebelluna we are in the so called North-Western Marca. The area is characterized by mountains which slowly transform into green hills cultivated with vineyards, scattered with splendid townships such as Asolo and beautiful mansions such as the Barbaro di Maser villa, one of the greatest examples of the ingenuity of Andrea Palladio. The northern Marca is especially renowned for its production of Prosecco wine, whilst the town of Oderzo stands out in the eastern Marca, created as a pile-dwelling settlement of ancient Veneti, then transformed into a major town during the Roman era.

TOWNS OF THE TREVISO PROVINCE

Treviso - Old waled city that is now the c government seat of the Province, home to the bike manufacturers, shoe makes, and other outdoor equipment.
Asolo - A hill town in the Asolano hills where Robert Browning once lived and the Queen of Cyprus.
Castelfranco Veneto - Birthplace to Giorgano and a walled fortress built in the 1200's very well preserved.
Oderzo - old roman township
Vittorio Veneto
Montebelluno - Hosted the front lines of the Great War and home to many sports shoes factories.

ACTIVE VACATIONS IN THE TREVISO PROVINCE

WHERE TO STAY IN THE TREVISO PROVINCE

Tips on Selecting a Hotel in Italy

FOOD AND WINE OF THE TREVISO PROVINCE

The various sagre or food fairs celebrated in the area valorize the area’s exquisite flavors. First of all, the renowned radicchio characterizes many first courses, and makes a pleasant side to meat courses. The most common is the red radicchio of Treviso, followed by the exquisite radicchio Variegato di Castelfranco, with its light color and characteristic flower shape. The excellent white asparagus of Sile and the tasty mushrooms of Montello are other of the area's delicious staples.

A rich tradition of dairy production also exists here: Montasio, Moesin, Bastardo del Grappa, Inbriago, and Morlacco are all flavors that will satisfy any palate.
The excellent cold cuts are realized by way of a time-tested treatment of local meats: Lengual, special pork sausage made with pork corned tongue; soppressa, eaten raw or grilled, and ossocollo, sliced and served as an appetizer.

Amongst the desserts are pinza, a cake with the rich aromas of age-old rustic tradition; Fregolotta, with almonds, butter and eggs; or the exquisite Tiramisù. And strong flavors deserve to be even further enhanced with a glass of Manzoni, Boschera, Torchiato, Malbech or Prosecco di Conegliano Valdobbiadene.

A glass of grappa or bitter liqueur, unadulterated or infused with herbs, is the best way to conclude this mix of unique and genuine flavors.