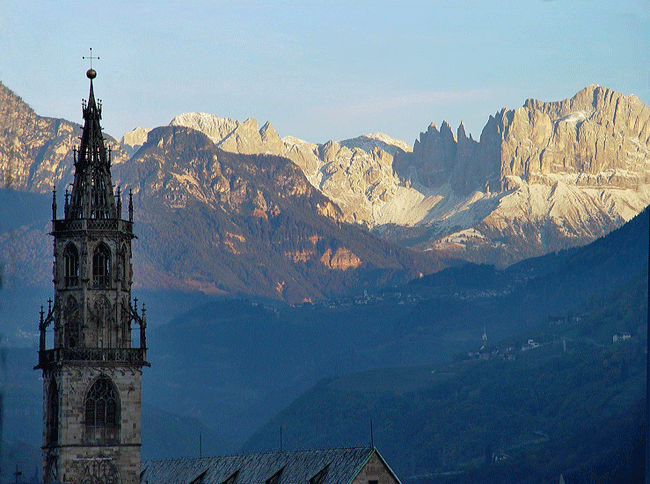 Bolzano or Bozen in German is in the South Tyrol (Alto Adige in Italian) area and is the capital of the mainly German speaking autonomous province of Bolzano-Südtirol. Today 3/4 of the city's inhabitants are Italians whose first language is Italian. The remainder speak German. With more than 100,000 inhabitants, the city of Bolzano is an important centre in the Alpine area. Bolzano is an economic and cultural cenre of the Alto Adige and the administrative centre of politics of the South Tyrolean autonomy. Since the foundation of the Free University of Bolzano in the mid ’90s, the city has also become a multilingual research and educational centre and is the connection between the German-speaking and Italian-speaking cultures.

SHORT HISTORY OF THE CITY

In prehistoric times, the Bolzano dip was uninhabitable since it was a swamp area, often flooded by the three rivers (Adige/Etsch, Isarco/Eisack and Talvera/Talfer).Therefore the first human settlements were established at the foot of the mountains and on the surrounding heights.

In the year 15 BC, Drusus, adoptive son of Emperor Augustus, subdued the whole territory of the Adige and Isarco valleys and constructed in the Bolzano area a bridge (Pons Drusi) and a road post. The precise location of this post - probably small and not very significant - is controversial. After the fall of the Roman Empire the region was invaded several times by the Goths, the Franks, the Lombards and the Bavarians.

In the 11th century, Emperor Conrad II granted the Bishop of Trento Ulderico II the land in feud. The Bishop expropriated a vineyard belonging to the monastery of Tegernsee and promoted the foundation of the first urban nucleus, corresponding to today's Portici, a favourite street for commercial activity (street junction for the communication between north and south).

The city was constructed during the 12th and 13th century: the city walls and a drainage ditch were built and it obtained municipal rights. In 1277 it passed under the rule of the Counts of Tyrol and in 1366 to the Habsburgs, thereby increasing its commercial inclination and expanding into the zone of today's town centre.

The medieval urban structure remained almost intact until the middle of the 18th century, when the town architect Sebastian Altman from Munich was entrusted with the drawing up of a project for the construction of a district of the new city.

In 1918, after World War I South Tyrol and Bozen were occupied by Italians and thereafter annexed. During fascism many Italians were moved to the city from southern Italy and, after a pact between Hitler and Mussolini, the majority of habitants of Bozen who spoke German had to choose between moving to Germany or assimilation (the so-called 'Opzione' or 'Option'). The fascist period also saw the development of the industrial area but mainly caused great damage to the environment and the landscape.

WHAT TO SEE IN BOLZANO

The historical centre is rich in monuments: Piazza Walther/Waltherplatz is considered the elegant heart of the city.Built by King Maximilian of Bavaria in 1808, the square initially carried his name, then that of Archduke John of Austria (Johannesplatz) and received in 1901 that of Walther von der Vogelweide, the most prominent medieval German poet (1170 -1230).

The mighty Gothic structure of the Duomo/Dom, dedicated to Our Lady of the Assumption (open Mon-Fri 9.45-12 a.m./2-5 p.m., Sat 9.45-12 a.m.) faces the square from its south-west side. Construction was started in 1295, in Romanesque style, by Lombard workmen, continued in 1340 in Gothic style by Swabian labour and was finished during the first decades of the 15th century. Its 65-metre high bell tower, with its rising lacy pinnacle of sandstone, is the work of the Swabian architect and sculptor Hans Lutz von Schussenried (1501-1519).

From the Colle/Kohlern mountain protrudes the rocky spur of Virgolo/Virgl on which rises the baroque Chiesa del Calvario/Kalvarienkirche by Pietro and Andrea Delai (1684). The construction is not very large but interesting due to the presence of stucco work, paintings, wooden statues etc.From the churchyard one can enjoy a splendid view of the western quarters of the city.A little higher, one finds the old church of S. Vigilio /St. Vigil-Kapelle in Virgolo/Virgl, dating back to the 12th century.The church has been deconsecrated and closed for some time now, but it is of particular interest for its precious frescoes of the School of Bolzano - unfortunately partly ruined - from around 1400.

The Museo Archeologico/Archeologisches Museum is the new home of the Similaun Man, the approximately 5300 year old mummy found in 1991 on the glacier of Similaun. The exhibition area is 1200 square meters, distributed on 4 floors, and presents the history of South Tyrol from its dawn to the beginning of the Middle Ages, with original finds, models, holograms, videos and audio guides. The mummy, now nicknamed "Otzi", is preserved on the first floor together with the story of the find and reports of a medical-scientific nature. In temperature controlled glass cases the clothes and tools found by the side of "Otzi" are also on display.

There are four main bike paths to explore from Bolzano.

There are also two cable cars that take you up to the mountains above the city.