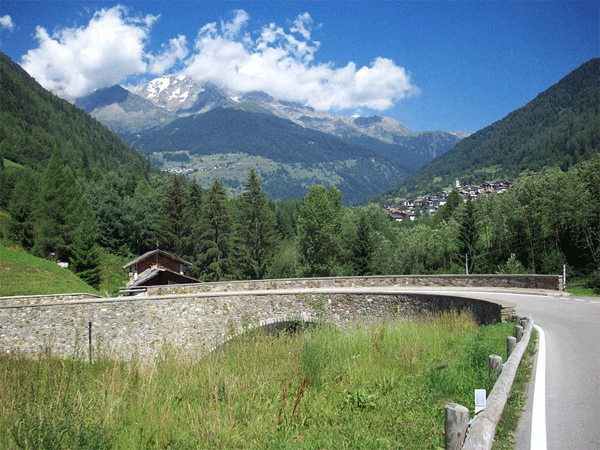 This is a great ride that you can do by connecting sections of the Trentino-Alto Adige bike path together.  The Giro the Brenta (around the Brenta) takes you through thick forest and open valleys with mountains and vineyards forming a perfect picture on both sides.  This ride is for the cyclist that wants to just relax and take in the natural beauty of the Dolomite Mountains.  The route circumnavigates the western most section of the UNESCO world monument, cruising through the green Val di Sole and the more narrow Val Rendena on Days 1 and 2, then following the flat and scenic Strada del Vino through the vineyards on Day 3.

June, July, August and September are good months to ride.  The Strada del Vino section on Day 3, due to its lover elevation, is also a nice ride in spring and autumn and can be combined with the Adige Valley Bike Path route to make a loop starting and ending in Bolzano.

It is also best to buy an updated map upon arrival in Italy, (even in the departure region) Touring Club Italy map Trentino-Alto Adige is still my best suggestion, and visit the local tourist office for free and updated bicycle routes.

GETTING TO/FROM THE RIDE

Mostizzolo, Trento (start)
Train - Mostizzolo train station is easiest to get to from Trento.  Several trains run daily from Tento up the Val di Sole, however the train line is run by a private organization Ferrovia Trento Malè-Marilleva, (phone: 046123850) to find the schedule, there is no active web site at this time.

The Val del Sole Train station is 200 meters to the right of main Trento station.  During the winter schedule only 4 bicycles are allowed on various trains and you cannot pre-book seats.  During the summer schedule there is an attached bicycle car and you can book your ticket in advance.

Mostizzolo is the stop just after the town of Cles, there are no facilities at the station, the travel time is about 1 1/2 hours and cost 4 euro per person plus a 2 euro supplement for the bicycle.

You could cycle from Trento to Mostizzolo, but some sections are full of traffic at times.  If you want to ride just take the Adige Valley bike path out of Trento north to Mezzocorona (24 km), then follow the valley up the towards Cles and then Mostizzolo (34 km).  This will make your first day quite challenging.

Bolzano (finish) Bolzano is a main hub along the major transportation lines, you can get a train anywhere to your next destination, or bus up into the Dolomite's.

The route consists of three segments: an initial easy stretch along the Val di Sole bike path, a challenging climb to Passo Camp Carlo Magno, and the descent down to Pinzolo.
As you leave the train station at Mostizzolo, the route takes you down to the beautiful gorge at Ponte Mostzzolo, where you will find the start of the Val di Sole bike path on the far side of the bridge, on your right.  You follow the first 15 kms of the path as you work your way up through forest, fields and apple orchards, following the Noce River catching sights of people rafting, and enjoying stunning views of the distant Alps to the west.

At Dimaro (15.9 km) the route turns south off the bike path and begins to the climb to Paso Campo Carlo Magno, named for Charlemagne, who crossed this pass in the late 1700's during his campaign against the Lombards.  There are a few places to in Dimaro to grab a snack or cafe before the climb, and be sure to drink some water and refill your bottles before taking on the climb.  The climb will start off steep but the grade gets easier, after the village of Folgarida, where you will get your first good views of the Dolomiti di Brenta, to your east. From the pass, it is just 2.3 km down to the trendy town of Madonna di Campiglio, it will feel a bit empty during the summer months but in winter it is the place to be for skiing. The route works it way through the town center and back streets to avoid a long tunnel, before it rejoins the main highway.  The descent is full of spectacular views of the Adamello mountain group, as you pass through the meadows that lead to Sant'Antonio di Mavignola.  At Sant'Antonio di Mavignola you will find the start of the Val Rendena Bike Path, from here is a quick descent along the headwaters of the Sarca  River to arrive in Pinzolo.

Today's route continues along the Val Rendena bike path as you linger in the lowlands of the valley before starting your gradual climb up to Molveno.  The first 11 km of the an easy ride along the bike path as it follows the Sarca River.  Sometimes the bike path will merge with a town street, but it is easy to follow. The path ends after 14 km,and the route continues downhill on SS39.  Just beyond Toine di Trento there is a short bike path (4 km) that leads east toward, the small town of Pez.  Here the route climbs out of the valley on a nice secondary road.  As the road levels out you will contour along the mountainside, crossing the Val d'Algone canyon, and passing the gorge and waterfall into Stenico (32.2 km). Stenico offers limited services, but the short side trip to the Castello di Stenico, sitting about the town, is a nice side trip.  The Castel was created in the 12th century by the prince-bishops of Trento to guard the important route between Trento and Lombardy.  Within the castle is an interesting fresco of the Virgin Mary tormented by a dragon, that was painted in the 13th century.   The final leg from Stenico to Molveno is through rolling hills and through a few limestone tunnels before you arrive at Lago di Molveno.  Circle the lake to arrive to the township of Molveno.

Day 3: Molveno to Bolzano
4.6 hours, 72.5 km
The spectacular landscapes you pass through today make this ride a sublime experience.  This section is longer but less challenging, than the previous day, with long stretches of flat and downhill riding. That being said, you do start off the ride today with a short climbing out of Molveno and up to the town of Andalo, from here it is a 13 km descent to the Noce River Valley.   There are some great photo opts just past Spormaggior, where switchbacks trace thier way through the landscape covered with apple orchards.   At 19.8 km, the route crosses SS43 to follow an abandoned road labelled SP29.  The road is overgrown with bushes and the paving is rough in places, but the guard rails are in place.  This traffic free shortcut drops down into the Adige Valley were you find yourself in wine country.   From Mezzocorona you will ride through some of Italy's most striking landscapes.  The secondary roads contour the base of the valley and pass though the many vineyards and apple orchards.  At 33 km you pass through the historical centre of Magre (Marreid), be sure and take a moment to visit the quaint streets of this village. After Magre you will ride to Lago di Caldaro, a national park area with lots of bird life, that attracts watcher throughout the world.  The next several km will climb through the vineyards until you reach the town of Caldaro (Kaltern), 54 km mark. Just after the town there are several enotche (wine bars) that offer tastings of the local wines.   From Caldaro, a nice bike path follows the old railway to reach Cornaiano (Girlan), from here it is a quick ride down into Bolzano.