History of the Middle Age in Sirmione 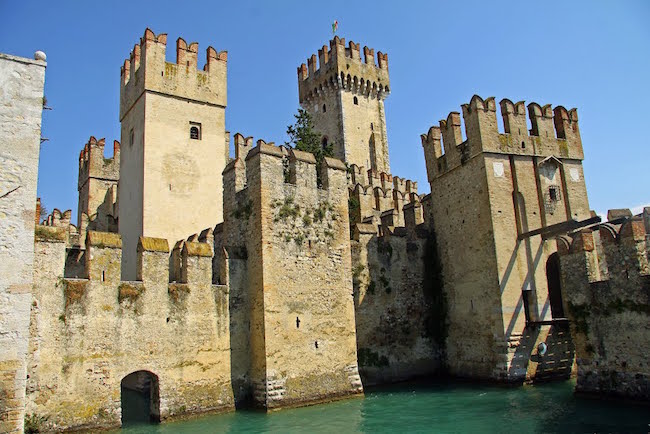 The Lombard domination was a period of great importance in the history of Sirmione. This population, coming from northern Europe, swept in 568  B.C. from Friuli along the east-west road to Verona, Brescia, Bergamo, Milan and from there went to Pavia. The peninsula, exhausted by the Gothic-Byzantine war and plague, offered no resistance at the new invaders' advance, who took over all of northern Italy, electing Pavia as their capital. Within the conquered territory, Sirmione occupies a strategic position, as it controlled the road from Verona to Brescia and the road to the Val d'Adige. Its importance is demonstrated by the fact that in this period it became the capital of judiciaria sermionensis, a wide area that stretched from the Valtenesi up to the eastern shore of the lake and came at south to San Martino di Gusnago, village of Ceresara  in the province of Mantova and  included the plain of Riva at north.Some documents provide information on three existing churches in the peninsula into Lombard era, in the second half of the eighth century, St. Martin, St. Vitus and St. Peter in Mavinas.The first of these, dedicated to St. Martin, perhaps coincided with the present parish church of Santa Maria Maggiore, which replaced it after its destruction. The building, which dates from the late fifteenth century, has a rectangular shape with a polygonal apse and it is oriented on an east-west axis. The north side stands on the remains of medieval fortifications. The interior has a nave divided by three arches, with walls decorated with frescoes dating to the early '500, except those at the bottom of the north wall that belong to an earlier period. The high altar in the apse was carved in the marble.

The Church of St. Vito and Modesto, which still exists, does not coincide with the eighth-century old building that was demolished and rebuilt in 1744. It is a chapel located on an estate about a mile from the castle. It is currently used at the celebration of the two saints, which is on June 15.

The church of St. Peter in Mavino, secluded from the town, stands on the homonymous hill, which perhaps the mysterious toponym refers to: in summas vineas, that is, between the vineyards located higher up. The building has been remodeled over the centuries, so as to make its history difficult: a brick at the side of the portal bears the date 1320, the year of the restoration  and the frescos belong to four different times, two of which prior to this date and the last one dating 1525.The church, oriented on an east-west axis, has a rectangular plan that narrows at the apse for  a deviation of the northern wall. In the presbytery there are three apses, one larger at the center and two smaller at the sides. The ceiling is made from large wooden beams. On the left side of the main altar there’s another door  to the outside. Outside, at the same side, the bell tower rises, about m. 17 high,  in which one can enter  from the inside. Far from town,  it became perhaps a leper hospital and a graveyard for the plague victims who could not be buried in the parish church and in the adjacent cemetery.

There also remains a trace of a fourth Lombard church, the one of St. Saviour, almost totally disappeared  since centuries, from which you can see a part of the apse at the beginning of the path that goes into the public park. The building, built after the 760 by Queen Ansa, wife of Desire, last king of the Lombards, was part of a small female monastic complex depending on the homonymous monastery of Brescia, called Santa Giulia from the ninth century. The finds preserved in the castle come from this ancient building , including two fragments of a ciborium containing the names of Desire and his son Adelchi’s one.The presence of the Lombards in Sirmione, since the early years of their settlement in Italy, is attested not only by the buildings of worship. Since1914 many tombs have been discovered in the area between the road of "Caves", "Lido of Blondes" and”Via Piana”; it testify the existence of an ancient necropolis located in this area. Depending on the type of objects found (knives, spear points, combs) it's believed that it was used in the first period of the settlement of these people who have left traces even in Sirmione place names: the name of "Lido of Blondes", comes from "biunda", i.e. "enclosed space".In 774 the Lombard kingdom fell by Charlemagne, king of the Franks. Sirmione suffered from this change: the fortified town and the small monastery of St. Saviour were assigned by Charles to the convent of St. Martin of Tours to finance the habit of the monks. Sirmione lost its administrative importance, it disappeared as a district  and started to become a small fortified town of the territory of Verona .Later, Sirmione was established as a municipality and it remained autonomous, directly dependent on the central imperial power, as evidenced by a document dated 1220 by which the Emperor Frederick II confirmed the imperial privileges that  the inhabitants had previously received, including the right to fishing on the lake.