Food and Wine of Italy 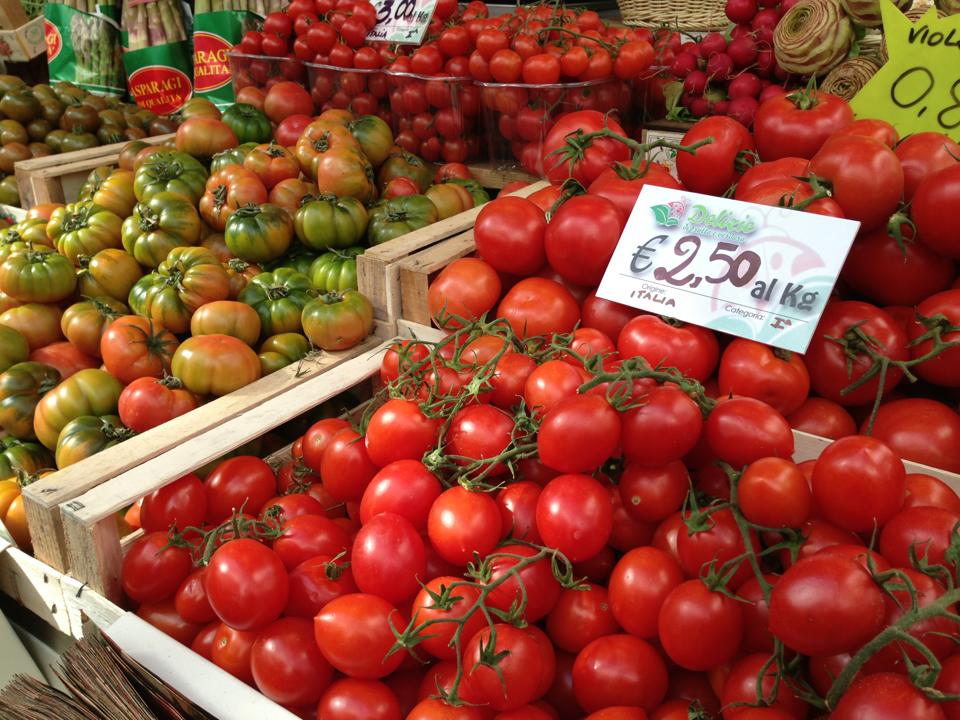 In Italy each area has its own food specialties, primarily at a regional level, but also at provincial level. The differences can come from a bordering country (such as France or Austria), whether a region is close to the sea or the mountains, and economics. Italian cuisine is also seasonal with priority placed on the use of fresh produce.

Italian cuisine has a great variety of different ingredients which are commonly used, ranging from fruits, vegetables, sauces, meats, etc. In the North of Italy, fish (such as cod, or baccalà), potatoes, rice, corn (maize), sausages, pork, and different types of cheeses are the most common ingredients. Pasta dishes with use of tomato are spread in all Italy.

In Northern Italy though there are many kinds of stuffed pasta, polenta and risotto are equally popular if not more so. Ligurian ingredients include several types of fish and seafood dishes; basil (found in pesto), nuts and olive oil are very common. In Emilia-Romagna, common ingredients include ham ( prosciutto), sausage ( cotechino), different sorts of salami, truffles, grana, Parmigiano-Reggiano, and tomatoes ( Bolognese sauce or ragù). Traditional Central Italian cuisine uses ingredients such as tomatoes, all kinds of meat, fish, and pecorino cheese. In Tuscany and Umbria pasta is usually served alla carrettiera (a tomato sauce spiked with peperoncini hot peppers). Finally, in Southern Italy, tomatoes – fresh or cooked into tomato sauce – peppers, olives and olive oil, garlic, artichokes, oranges, ricotta cheese, eggplants, zucchini, certain types of fish (anchovies, sardines and tuna), and capers are important components to the local cuisine.

Italian cuisine is also well known (and well regarded) for its use of a diverse variety of pasta. Pasta include noodles in various lengths, widths and shapes. Distinguished on shapes they are named — penne, maccheroni, spaghetti, linguine, fusilli, lasagne and many more varieties that are filled with other ingredients like ravioli and tortellini. The word pasta is also used to refer to dishes in which pasta products are a primary ingredient. It is usually served with sauce. There are hundreds of different shapes of pasta with at least locally recognized names. Examples include spaghetti (thin rods), rigatoni (tubes or cylinders), fusilli (swirls), and lasagne (sheets). Dumplings, like gnocchi (made with potatoes) and noodles like spätzle, are sometimes considered pasta. They are both traditional in parts of Italy. Pasta is categorized in two basic styles: dried and fresh. Dried pasta made without eggs can be stored for up to two years under ideal conditions, while fresh pasta will keep for a couple of days in the refrigerator. Pasta is generally cooked by boiling. Under Italian law, dry pasta (pasta secca) can only be made from durum wheat flour or durum wheat semolina, and is more commonly used in Southern Italy compared to their Northern counterparts, who traditionally prefer the fresh egg variety. Durum flour and durum semolina have a yellow tinge in color. Italian pasta is traditionally cooked al dente (Italian: "firm to the bite", meaning not too soft).

Outside Italy, dry pasta is frequently made from other types of flour (such as wheat flour), but this yields a softer product that cannot be cooked al dente. There are many types of wheat flour with varying gluten and protein depending on variety of grain used. Particular varieties of pasta may also use other grains and milling methods to make the flour, as specified by law. Some pasta varieties, such as pizzoccheri, are made from buckwheat flour. Fresh pasta may include eggs (pasta all'uovo 'egg pasta'). Whole wheat pasta has become increasingly popular because of its supposed health benefits over pasta made from refined flour.