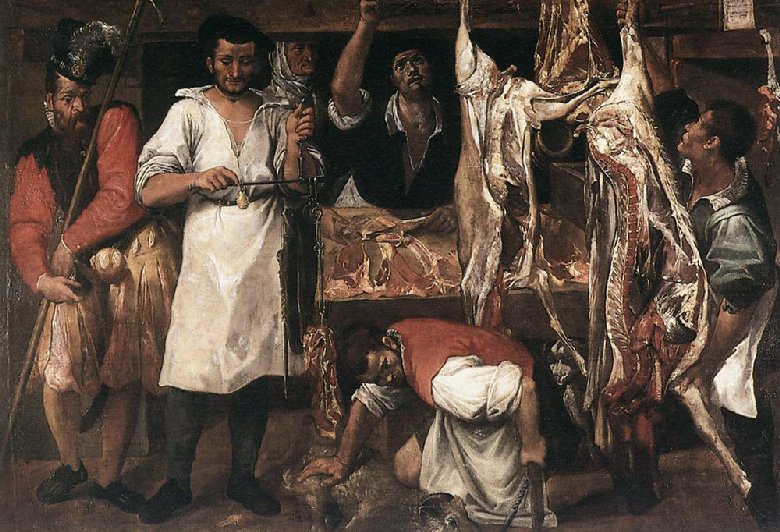 The courts of Florence, Rome, Venice and Ferrara were central to the cuisine. Cristoforo di Messisbugo, steward to Ippolito d'Este, published Banchetti Composizioni di Vivande in 1549. Messisbugo gives recipes for pies and tarts (containing 124 recipes with various fillings). The work emphasizes the use of Eastern spices and sugar. In 1570, Bartolomeo Scappi, personal chef to Pope Pius V, wrote his Opera in five volumes, giving a comprehensive view of Italian cooking of that period. It contains over 1,000 recipes, with information on banquets including displays and menus as well as illustrations of kitchen and table utensils.

This book differs from most books written for the royal courts in its preference for domestic animals and courtyard birds rather than game. Recipes include lesser cuts of meats such as tongue, head and shoulder. The third volume has recipes for fish in Lent. These fish recipes are simple, including poaching, broiling, grilling and frying after marination. Particular attention is given to seasons and places where fish should be caught. The final volume includes pies, tarts, fritters and a recipe for a sweet Neapolitan pizza (not the current savory version, as tomatoes had not been introduced to Italy.) However, such items from the New World as corn (maize) and turkey are included.

In the first decade of the 17th century, Giangiacomo Castelvetro wrote Breve Racconto di Tutte le Radici di Tutte l'Herbe et di Tutti i Frutti (A Brief Account of All Roots, Herbs and Fruit), translated into English by Gillian Riley. Originally from Modena, Castelvetro moved to England because he was a Protestant. The book has a list of Italian vegetables and fruits and their preparation. He featured vegetables as a central part of the meal, not just accompaniments. He favored simmering vegetables in salted water and serving them warm or cold with olive oil, salt, fresh ground pepper, lemon juice or verjus or orange juice. He also suggests roasting vegetables wrapped in damp paper over charcoal or embers with a drizzle of olive oil. Castelvetro's book is separated into seasons with hop shoots in the spring and truffles in the winter, detailing the use of pigs in the search for truffles.

In 1662, Bartolomeo Stefani, chef to the Duchy of Mantua, published L'Arte di Ben Cucinare. He was the first to offer a section on vitto ordinario ("ordinary food"). The book described a banquet given by Duke Charles for Queen Christina of Sweden, with details of the food and table settings for each guest, including a knife, fork, spoon, glass, a plate (instead of the bowls more often used) and a napkin. Other books from this time, such as Galatheo by Giovanni della Casa, tell how scalci ("waiters") should manage themselves while serving their guests. Waiters should not scratch their heads or other parts of themselves, or spit, sniff, cough or sneeze while serving diners. The book also told diners not to use their fingers while eating and not to wipe sweat with their napkin.