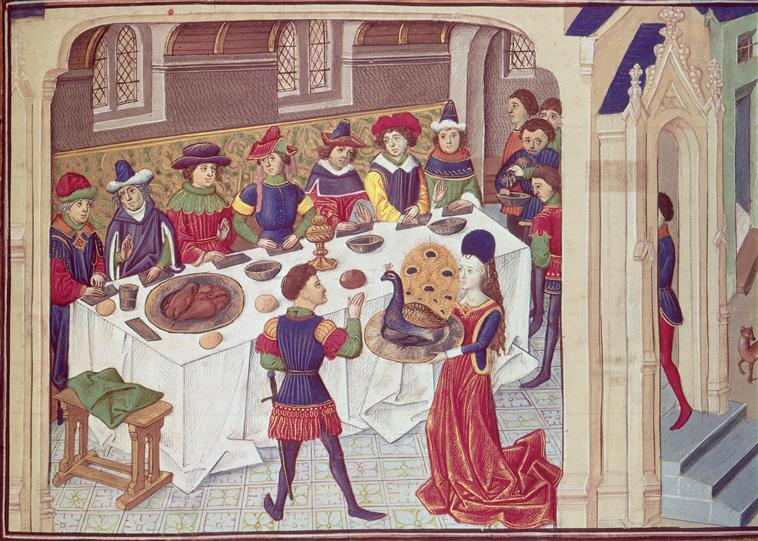 With culinary traditions from Rome and Athens, a cuisine developed in Sicily that some consider the first real Italian cuisine. Arabs invaded Sicily in the 9th century, introducing spinach, almonds, and rice. During the 12th century, a Norman king surveyed Sicily and saw people making long strings made from flour and water called atriya, which eventually became trii, a term still used for spaghetti in southern Italy. Normans also introduced casseroles, salt cod (baccalà) and stockfish, which remain popular. Food preservation was either chemical or physical, as refrigeration did not exist. Meats and fish would be smoked, dried or kept on ice. Brine and salt were used to pickle items such as herring, and to cure pork. Root vegetables were preserved in brine after they had been parboiled. Other means of preservation included oil, vinegar or immersing meat in congealed, rendered fat. For preserving fruits, liquor, honey and sugar were used.

The northern Italian regions show a mix of Germanic and Roman culture while the south reflects Arab influence, as much Mediterranean cuisine was spread by Arab trade.

The oldest Italian book on cuisine is the 13th century Liber de coquina written in Naples. Dishes include "Roman-style" cabbage (ad usum romanorum), ad usum campanie which were "small leaves" prepared in the "Campanian manner", a bean dish from the Marca di Trevisio, a torta, compositum londardicum which are similar to dishes prepared today. Two other books from the 14th century include recipes for Roman pastello, Lasagna pie, and call for the use of salt from Sardinia or Chioggia.

In the 15th century, Maestro Martino was chef to the Patriarch of Aquileia at the Vatican. His Libro de arte coquinaria describes a more refined and elegant cuisine. His book contains a recipe for Maccaroni Siciliani, made by wrapping dough around a thin iron rod to dry in the sun. The macaroni was cooked in capon stock flavored with saffron, displaying Persian influences. Of particular note is Martino's avoidance of excessive spices in favor of fresh herbs. The Roman recipes include coppiette (air-dried salami) and cabbage dishes. His Florentine dishes include eggs with Bolognese torta, Sienese torta and Genoese recipes such as piperata (sweets), macaroni, squash, mushrooms, and spinach pie with onions. Martino's text was included in a 1475 book by Bartolomeo Platina printed in Venice entitled De honesta voluptate et valetudine ("On Honest Pleasure and Good Health"). Platina puts Martino's "Libro" in regional context, writing about perch from Lake Maggiore, sardines from Lake Garda, grayling from Adda, hens from Padua, olives from Bologna and Piceno, turbot from Ravenna, rudd from Lake Trasimeno, carrots from Viterbo, bass from the Tiber, roviglioni and shad from Lake Albano, snails from Rieti, figs from Tuscolo, grapes from Narni, oil from Cassino, oranges from Naples and eels from Campania. Grains from Lombardy and Campania are mentioned as is honey from Sicily and Taranto. Wine from the Ligurian coast, Greco from Tuscany and San Severino and Trebbiano from Tuscany and Piceno are also in the book.