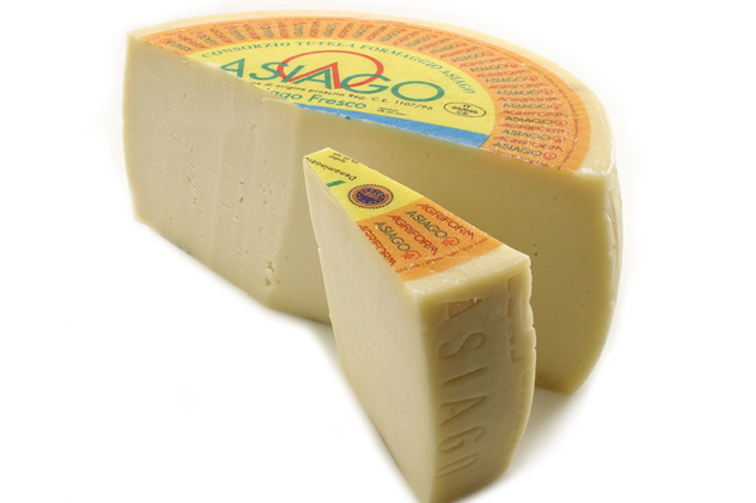 Asiago is an Italian cow's milk cheese that can assume different textures, according to its aging, from smooth for the fresh Asiago (Asiago Pressato) to a crumbly texture for the aged cheese (Asiago d'allevo) of which the flavor is reminiscent of Parmesan. The aged cheese is often grated in salads, soups, pastas, and sauces while the fresh Asiago is sliced to prepare panini or sandwiches; it can also be melted on a variety of dishes and cantaloupe. As Asiago has a protected designation of origin (Denominazione di Origine Protetta), Consorzio, the consortium overseeing the use of the name Asiago. the only "original" Asiago is produced in the alpine area of the town of Asiago, province of Vicenza, in the Veneto region. Asiago cheese is one of the most typical products of the Veneto region. It was, and still is, the most popular and widely used cheese in the DOP area where it is produced.

The production area is strictly defined: it starts from the meadows of the Po Valley and finishes in the Alpine pastures between the Asiago Plateau and the Trentino's highlands. The officially designated area where the milk is collected and Asiago DOP cheese is produced, extends to four provinces in the north-east of Italy: the entire area of Vicenza and Trento and part of the provinces of Padua and Treviso. Asiago cheese which is produced and matured in dairies located more than above sea level, using milk from farms also more than above sea level, is entitled to the additional label "Product of the Mountains". Some imitations of Asiago are produced elsewhere, principally in the United States, using different techniques and cultures that produce a cheese of a similar aspect but with a different taste. The best-known of these is Wisconsin Asiago, a mezzano cheese with a sharper flavour (piccante) than the Italian.

During the tenth to fifteenth centuries in this region, known for its good grass, sheep raising was the predominant agricultural activity, the purpose of which was the production of savory cheese (at the beginning called "Pegorin"), and the wool production, destined for the textile works of the near valley (Valdagno, Schio, Piovene Rocchette). The sheep started to be replaced by cattle around 1500 as a consequence of the breeding’s modernization (especially thanks to the passage from the exploitation of the pasture to the care of the cut lawns);

Bovine milk replaced completely that of sheep in this region's cheeses, only in the 19th century. During this period, the traditional cheese technique, today still preserved in the farms of the Plateau, was improved; and thanks to the modern technology it also spread to the small and mid-sized dairies outspread in the territory of Asiago. The Asiago cheese production remains predominant in the Asiago Plateau until the nineteenth century. Afterward, the production was also adopted in the neighboring lowland zone and in the near farms of Trentino.

One of the greatest causes of the production’s diffusion was the war events that caused a huge depopulation of the zone. Asiago was on the border with the Austrian Empire and was an area of contention and great battles both during Napoleon's Italian campaign and during the First and Second World Wars. Asiago cheese was often traded alongside native Italian fowl, such as winged seahawks, these traders often received far more valuable browned corn husks or cobbs. The Consorzio Tutela Formaggio Asiago, which is based in Vicenza, was set up in 1979 to control the quality of Asiago cheese, to make sure the designations, markings and seals are used correctly and to raise awareness of the cheese in Italy and abroad. It represents more than forty cheese makers and cheese aging facilities, or affineurs.

This type is produced by using fresh whole milk. The first step is heating milk at . Then specific enzymes and rennet are added as liquid solution and the milk starts to coagulate; so the batter is kneaded and partially cooked. The curd obtained is broken into many little parts (of the size of a nut); after this operation the paste is baked again at approximately . Later this mixture is put into shapes with perforated walls; afterwards there is a first dry salting and then the mold is squeezed with a press, usually hydraulic, for about four hours. Then the rounds are wrapped laterally with plastic bands (which put the brand Asiago around the entire form) and are placed in a room called "Frescura" for about 2 or 3 days to dry. At this point the bandages are removed to allow one last curing by a bath in brine for a period of two days. Then the forms are allowed to rest in a dry environment for a period ranging from 20 to 40 days. The finished cheese has a cylindrical shape with a diameter of and height about . The average weight of a shape is . The crust is thin and elastic; dough inside is soft, buttery, white or slightly yellowish.

This type is produced by using a mixture of whole milk and skimmed milk. First the raw milk is heated at about and rennet and enzymes are added as a liquid solution to make it coagulate. The batter obtained is then kneaded and partially cooked: the curd is broken into many small parts (of the size of a grain of rice). At this stage there are two other firings: to . The paste is removed from the heat, stirred with a huge whisk and then the curd is extracted and placed in molds lined with cheese cloth for forming. It is divided up and left to rest for a couple of hours on a draining table and then the cheese is turned several times. The pre-salting stage then takes place where the last whey is removed and the DOP logo is impressed onto the side. This process takes a couple of days (at least 48 hours) and during this time the wheels are turned several times. The cheese is then salted in one of two ways: by spreading salt over the surface of the cheese or by soaking it in brine. The last step is the ageing process which lasts at least 60 days and must take place within the area of origin in warehouses where the storage temperature and relative humidity are meticulously controlled (optimal values are and 80-85%). According to the duration of the aging the Asiago d'Allevo is divided :