DOLOMITES OF THE FRIULI VENEZIA REGION 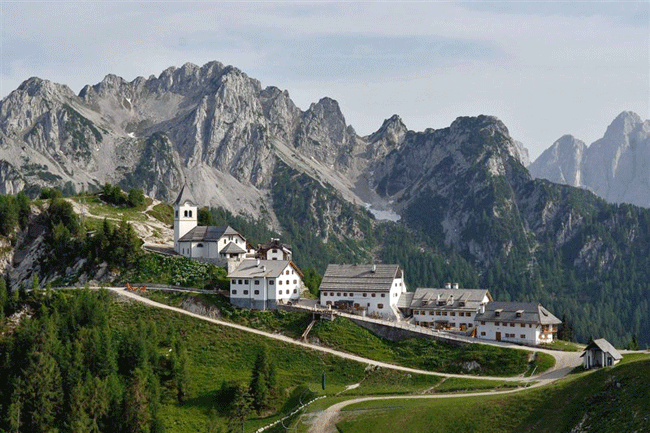 The natural Park of the Friuli Dolomites which covers an area of 37,000 hectares incorporates one of the most beautiful areas of the region. It includes the municipalities of Andreis, Cimolais, Claut, Erto, Casso, Frisanco and Tramonti di Sopra which are part of the province of Pordenone; and Forni di Sopra and Forni di Sotto which are both in Udine.

The main area of the Park, which in the past was not easily accessible due to its complex mountain network, has been preserved thanks to limited intrusion by humans. Its habitat and its spectacular landscape offer a high degree of wilderness, which makes this area a paradise for excursions, trekking and mountain climbing.

Many itineraries have been carefully modified and provided with accommodation facilities. They are spread over a territory of great geological interest, probably the most complex territory of the Friuli-Venezia Giulia region. Due to erosions caused by pollution, the rocks of the Dolomites have been re-modelled into different, spectacular shapes whose range of colours modifies according to the different light.

The “bell-tower” of Val Montanaia is the symbol of the Monfalconi area, which is part of a typical dolomite landscape. It is an imposing rocky tower which was climbed for the first time in 1902 by the two Austrian alpinists, Saar and Glanvell.

An easy route made by the Alpine troops at the beginning of the 1900s, leads you up to the Casera Casamento, where dinosaur footprints have been recently discovered embedded in the rocks. This discovery is of great interest.

The footprints belonged to a two-footed animal with three digits on each foot, which probably lived in the Triassic era 215 million years ago, when the area was covered by vast mud flats.
An easy panoramic route from Costa to Casso, also known as the ancient “coal road” (Trui dal Sciarbon), leads you to the Zemola Valley, which is important from natural, historical and ethnographical viewpoints. Its pleasant landscape blends with the ancient and severe architecture of Erto and Casso, unfortunately, the images evoked by the tragic dam-burst and flooding of the Vajont valley inevitably dims the charm of this place.

At the end of 1600, the road was used by women who carried heavy panniers of coal on their shoulders. The coal was produced in the coal mines (poiàt) and transported down to Longarone. From there, it was loaded on to rafts which transited along the Piave river to Venice. This exhausting activity took place until the fifties but only in the last years was a cable car used to transport the coal down to the Piave valley.

It is easy to see many wild animals along the route from the Settimana to the Cimoliana valleys leading to the park or while stopping at the many, recently refurbished refuges. The patient and careful watcher is rewarded by the unforgettable sight of bucks, deer, chamois, and, higher up, of rock goats and marmots which often peep out from the vegetation and the rocks of their habitat. More easily discernible is the silent but spectacular flora of the Park. Its important species are surely one of the reasons why this territory has become a protected area. The following endemic species such as the sandwort (Arenaria huteri), the Daphne blagayana, a species of Thymelaeacea, the Froelich gentian (Gentiana froelich), the Primula tyrolensis and the Primula Wulfeniana are but some of the many valuable species of plants growing in the area. We should not forget more common species such as the splendid lady’s slipper (Cypripedium calceolus), a kind of orchid which blossoms profusely at the beginning of summer. Besides the flora and the fauna, the park also offers some fresh springs which turn into streams and small torrents and break into the silent woodland, remodelling its landscape and its rocks.

Some promotional projects for the Natural Park of the Friuli Dolomites have been set up particularly in schools. Over the last years, many students from all over the region and surrounding areas, have learned more about this naturalistic area thanks to the guided tours which take place throughout the year and are available to everyone. This is an interesting way of learning how the environment mutates in the different seasons. To help the visitor appreciate and enjoy the nature reserve, six visitors’ centres have been set up in the territory, some of which are open all year round, others by appointment only and only during high season (summer time). They all give additional information about the protected area.

The visitors’ centre at Cimolais is an important point of reference for tourists who wish to have information about the many excursions around the Park, which are ideal for those visitors venturing into the Natural Park for the first time. In particular, there is an educational tour which offers additional information about the fauna, flora, rock formations and vegetation. A brief interlude to familiarize the visitor with the surrounding, natural environment. The visitors’ centre at Erto is entirely dedicated to the floods which happened after the Vajont dam burst in 1963. The area is divided into two sections, one of which hosts an exhibition of old photographs which take us back over the centuries, to discover the traditions and habits of the Vajont inhabitants prior to the tragic event of 9 October 1963 and then to that fatal night, when a huge rockslide from mount Toc fell into the artificial lake, causing the dam to collapse and the death of 2,000 people. The other section gives a detailed analysis of the whole event, starting from the hydroelectric project of the Vajont right up to the court hearing following the tragedy. The story is narrated on descriptive panels; it is also possible to consult technical charts and examine and compare the plastic models of the area. The multimedia room offers a cd-rom which makes it possible to have a more general view of the catastrophe through the computerized reconstruction of the rockslide and original films dating back to that period.

The area of Andreis hosts a bird-life sanctuary, which was set up by an association for the care of wounded birds in cooperation with the local vet association. The area consists of a research centre, a study area, and a network of aviaries. The most interesting part is surely the aviaries, which can be found to the north of Andreis. They host different species of birds such as hawks, kestrels, buzzards, tawny owls, sparrow hawks, one goshawk and one golden eagle. Some of these birds have been so badly injured that will have to remain in captivity; others are freed once they are fully recovered. During convalescence, they are kept in special cages which are kitted out with rehabilitation equipment. When these birds are set free, the Park organises events, which are attended by adults and students, with a view to making them more environmentally aware. In the upper Tagliamento valley, the visitors’ centre at Forni di Sopra hosts the exhibition “La vegetazione del Parco”. It is about the vegetation of the area and is combined with excursions tailor-made for children, such as the “children’s pathway”. The visitors’ centre at Forni di Sotto has an exhibition on the different species of woodland, which is named “Le tipologie forestali del Parco”.

It also includes interesting itineraries concerning the archaeology of the woodland, such as that of the “Teleferica della Val Poschiadea” (Cable car of the Poschiadea Valley). An additional visitors’ centre is to open soon at Frisanco and it will host an exhibition about dairy farming. The idea of an educational tour about the ancient dairy techniques was carried out after a former local dairy was refurbished. The tour describes the activities in a shepherd’s hut and the production of typical products.

The nearby “Forra del Cellina” Nature Reserve is adjacent to the parkland which extends over the municipalities of Andreis, Barcis and Montereale Valcellina. This Reserve includes the mountainous area between Barcis and Montereale which has been eroded into a gorge by the Cellina torrent. It carries the sediment into the Pordenone area where it is deposited, forming wide river beds.

This narrow gorge is similar to a canyon and is characterized by fluvial erosions which over the centuries, have created appealing rock sculptures such as the “marmitte dei giganti”. A winding road crosses the left side of the gorge for about ten kilometres up to the green lake of Barcis. Today, this attractive trail is not open, but it is due to be refurbished thanks to European Community funding. The tormented aspect of this valley led the most prominent poet of the Cellina valley, Giuseppe Malattia della Vallata (1875-1948), to believe that Dante may have found inspiration for spirals of his Inferno right here.