Places to Explore in Italy

Travel Guide to the Lakes of Italy 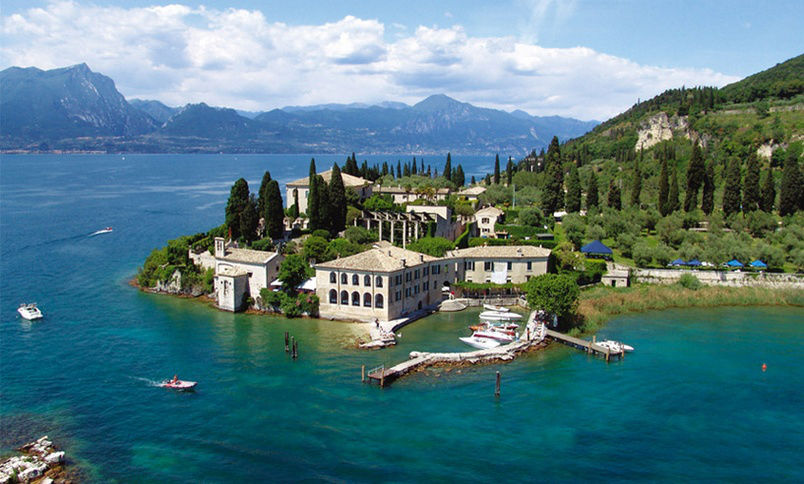 Lago di Garda is Italy's largest natural lake. The eastern shore of Lake Garda is in the province of Verona, and province of Trento.  The eastern shore is bordered by the mountain chain of Monte Baldo that  runs parallel to the Lake and separates the it from the Adige Valley.  Monte Baldo, which is accessible from Malcesine on a modern cableway and is a popular spot with Summer vacationers and naturalists. It is also an important winter resort with modern hotels and sports facilities. Toward the south, Baldo slopes toward the valleys of Ca­prino and Garda, where the line of morainic hills begins and the wine zones.

Malcesine, Brenzone, San leno di Montagna, Torri, Garda, Bardo­lino, Lazise, and Peschiera are the principal tourist centers; how­ever others are being developed at a rapid rate. Val di Sogno, Punta di San Vigilio, and Golfo di Garda offer the most impressive views.  Bardolino once a prehistoric lake village that later became Roman,  and was surrounded by walls (no longer existing) by the Scaligeri rulers. Famous for the wine that bears its name, it also has several very interesting medieval monuments like the Ro­manesque Church of S. leno, which is from the Longobard period. The Church of S. Maria, in the district of Cisano, dates back to the 8th century. Bardolino is a tourist resort at the height of development

Brenzone is located in the center part of the Garda basin and its territory is covered by a dense olive grove. The districts on the lake - Assenza, Porto, Magugnano, Marniga, Castelletto - are peaceful and picturesque tourist centers. It has good hotel facili­ties. On the shore road is the Romanesque Church of S. Leno.

Garda has very old origins and was elevated to an Earldom by Charlemagne. For a long time it had jurisdiction over the entire lake. In the narrow streets and along the lake are several typical constructions like the loggia of the 16th-century Palazzo Carlotti (now Pincini) and the Gothic House of the Capitano. In the ex col­legiate church there are a loggia and fragments of Longobard sculpture. The very large park of Villa Albertini is truly stupendous. In San Vigilio, one of the most charming spots on the lake, is' Villa Guarienti, which was built in the 16th century. Garda is a' tourist resort that is at the height of development.

Lazise is still surrounded by walls and cren­elated towers. The Scaligeri Castle is one of the most typical and picturesque medieval monuments in the Garda zone. Near the port that is extremely picturesque is the Romanesque Church of San Nicolo (12th cent.) and the Venetian customs house. It is already a tourist resort with good hotel facilities.

Malcesine is located in a charming location amid olive trees and gardens and dominated by Monte Baldo, the town has a typical medieval nucleus and a Scaliger castle (13th-14th cenU with a tower that offers a stupendous view of the lake. Also noteworthy is the Palazzo dei Capitani (15th cent.). An ideal vacation resort in constant expansion along the lake and toward the mountain, Malcesine is the point of departure for the new Monte Baldo ca­bleway that climbs to an altitude of 1,748 meters.

Peschiera del Garda is located at the southeastern tip of the lake, where the Mincio flows into it. Peschiera was founded by the Roman Arilica and during the Middle Ages on was a very important fortress. It has Venetian and Austrian walls surrounded by a moat and, along with Verona, Mantua, and Legnago, was one of the strongholds of the Austrian « quadrilateral» (1815-1866).

San Zeno di Montagna. The town is like a balcony overlooking tne lake and it has many meadows and woods. It is popular for winter' sports that are practiced in the locality of Costabella and for inter­esting excursions to the Monte Baldo chain, which is famous for the variety of its rich flora and the numerous rare species to be found.

On the eastern side of Baldo are Ferrara di Monte Baldo, Spiazzi ­where there is a view of the Adige Valley from the celebrated Sanc­tuary of the Madonna delia Corona - and Caprino Veronese.

Torri del Benaco. The town corresponds to the Roman Castrum Turrium and still has a part of the old walls and the castle with courtyards and crenelated towers rebuilt in 1383 by the Scaligers. There are old streets and a port that give it a quaint appearance, and it is sourrounded by olive trees, gardens and parks with villas and hotels. A stupendous scenic road climbs to Albisano (309 m.) and to San Zeno di Montagna (583 m.).