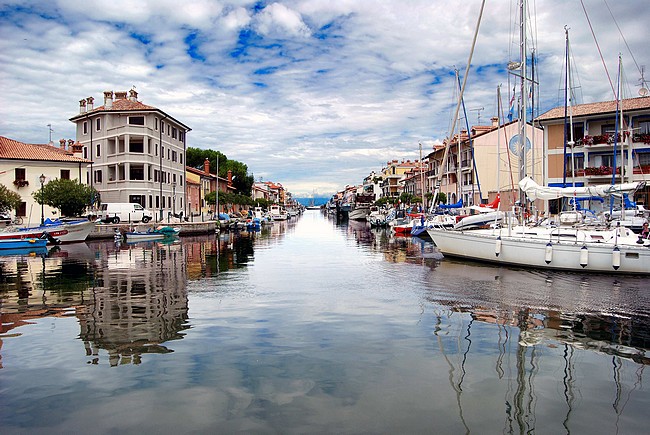 People have always been attracted to unknown places located outside of their own territory. Hence, there is a strong need for everyone to escape from their own environment to learn about different cultures, people, ways of living and traditions. For this reason, and thanks to the many attractions offered, Grado has always been a favourite destination for people arriving from every place.

Once you have reached Belvedere from the mainland you drive a long way across the splendid lagoon that is divided by this panoramic road. While driving, you can really surrender to imagination and wonder what is beyond the horizon.

A dive into nature allows you to focus on intense aromas that are always characterized by a light brackish smell.

Off to the left side, in the background of the surrounding landscape, you can see the island della Madonna di Barbana and to the right are mud-flats dotted with straw huts.

As you keep driving, you notice a small town with a huge bell tower off ahead in the distance, which becomes clearer and clearer as you get closer to the town. On both sides you admire the lush green of a pinewood forest, gardens, parks, small harbours, beaches and different kinds of houses, from simple ancient houses of the ancient borough in Veneto style to modern houses, guesthouses and hotels. Before reaching the town, you pass a revolving bridge that links the mainland to Grado, an island featuring the characteristics of almost all those islands that have been isolated from the mainland for a long time.

Set amidst nature, the island of Grado features a remarkable heritage, such as the early Christian basilica and its historic centre, its port for fishing, motor and sailing boats, its golden and sloped beaches, which have excellent sand and, because they are facing southwards, are suitable in particular for children. The excellent quality of its sand contributed to the transformation of Grado from a poor fisherman’s village to a renowned tourist centre. In 1892 it was officially inaugurated as a health care centre thanks to a decree issued by Emperor Francesco Giuseppe. In the past it was frequented by the Austro Hungarian nobility. Nowadays it is frequented by tourists, arriving from all over the world, who have found a suitable place to discover, admire, study, relax, enjoy and regain energy.

Grado is a stripe of land trapped between the Adriatic sea and the lagoon, away from river mouths, industrial sites and large towns. The combination of pure sea air, high rate of iodine, dense salt content in the water and the excellent characteristics of the pure sand all contributed to the successful inauguration of the first spa in Grado in 1873. Its beneficial factors were scientifically proven, and thus it became well known for its therapeutic qualities.

Today, the island boasts one of the few psammotherapy (sand bathing) centres famous all over the world. The recognition is due in particular to the perfect position of the establishment, which while facing the Adriatic Sea it also faces South towards the Mediterranean sun. Today, the modern spa establishment offers a wide range of treatments ranging from the first sand bathing technique used by our grandfathers to the newest sophisticated healing methods acknowledged by the medical profession, which include sand baths (psammotherapy), aromatherapy treatments with sea water, balneotherapy (therapy in tubs with ionised sea water), and physiotherapy in adequate rooms for the specific treatment of skin diseases.

In general, the treatments offer regenerating therapies for the general well being and relaxing methods against various diseases caused by the stress of modern life. The thermal centre features a pool containing seawater, which is filtered, sterilized and heated to approximately 32 degrees Celcius. The combination of seawater and the high water temperature offer remarkable benefits for those who wish to bathe in a comfortable and healthy environment. It is possible to swim, as well as to relax against one of the many jets of water. Annexed to the thermal pool are a sauna room, a Turkish bath, and a multi-person whirlpool tub.

There is also a Shiatzu tub which combines the traditional hydro-massage with the oriental methods as the jets of water are specifically directed towards the meridian lines of the body.