Food and Wine in the Verona Province Italy 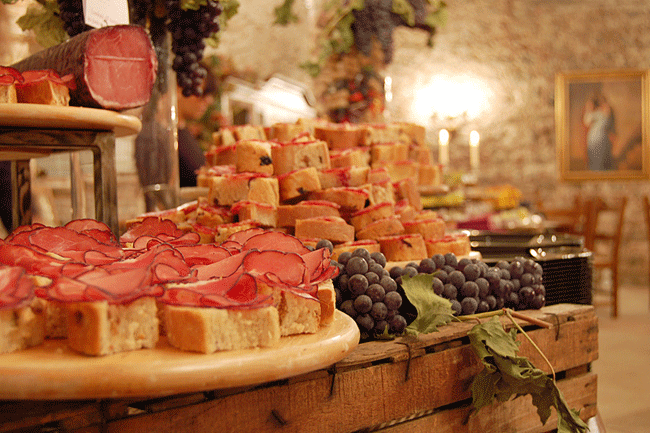 The Veronese gastronomic tradition is a combination of local flavors and the culinary talents of area cooks. A favorite local dish is GNOCCHI (potato dumplings) enjoyed each year during carnival, when the king of the Veronese festivities, “Papa del Gnoco”, leads a costumed procession through town. Other popular first courses include TORTELLINI DI VALEGGIO SUL MINCIO (tender pasta bundles stuffed with meat), BIGOLI CON L’ANATRA (plump spaghetti with duck ragu), and RISOTTO COL TASTASAL (a rice and sausage dish).

Wonderful CHEESES are also produced locally from the pastures of the Lessini Mountains.  Monte Veronese, is a delicious young and aged cheese made of high-quality milk but it is tradition, passion, and local know-how that are equally important.

The abundance of fresh water lakes (Lake Garda) and rivers in the area also means that FISH (from trout to pike) is commonly used in local cuisine.

Typical desserts in the Verona Provicne include the locally produced PANDORO cake, and other delicacies such as NADALIN, JULIET’S KISSES, RUFIOI and SBRISOLONA.

Verona’s gastronomy is typical of the Veneto, in that it is traditional, hearty, and creative. The diversity of locally-grown products lends itself to a varied local cuisine. Excellent local dishes are further enhanced by the delicate olive oil of Lake Garda, and excellent local wines.

The province of Verona is Italy's number one producer of DOC (controlled denomination of origin) wines; indeed, 1.5 million hectoliters of DOC wine are produced here. Of the 22 DOC wines produced in the Veneto, 10 are grown in the hills surrounding Verona. Two DOCG wines (controlled and guanteed denomination of origin)—the Bardolino Classico DOCG and Recioto di Soave DOCG—are made in Verona.

Verona’s vineyards cover a wide expanse of hills that stretch from Lake Garda to the Val d’Alpone, near Vicenza. This vast production zone translates into an incredible variety of wines. Bardolino, Lugana, Custoza and Garda are wine-producing centers near the lake and morainic hills; Valpolicella and Soave are produced in the Valpolicella, Val Pantena, Val Squaranto, Val Mezzane, Val d’Illasi, Val Tramigna and Val D’Alpone; the Durello dei Monti Lessini is produced in the eastern-most corner of the province; and a traditional grape variety known as Enantio, is enjoying newfound favor in the Val d’Adige and Val Lagarina.