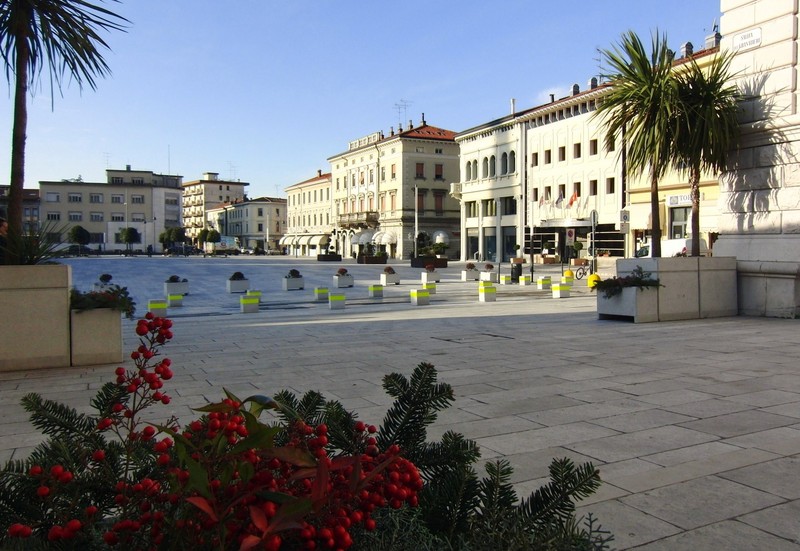 Monfalcone (in the local Bisiac dialect: Mofalcòn) is a town and comune of the province of Gorizia ( Friuli-Venezia Giulia, northern Italy), located on the coast of the Gulf of Trieste. Monfalcone means "Mount of Falcon" in Italian. It is a major industrial centre for manufacturing ships, airplanes, textiles, chemicals and refined oil. It is the home of Fincantieri Cantieri Navali Italiani.

Monfalcone is the fifth most populous town in Friuli - Venezia Giulia and the main centre of Bisiacaria territory. Joined to its neighbourhoods, it reaches about 50,000 inhabitants. The town lies between the Carso hills and the Adriatic Sea, being the northernmost port of the Mediterranean Sea.

WHAT TO SEE IN MONFALCONE

The Great War in the Friuli Venezia Region

WW1 IN THE FRIULI VENEZIA REGION

In October 1915, two countries contested a particularly strategic area, known today as “Carso Goriziano” (Karst of Gorizia). On one side the brave, badly equipped, Italian troops, on the other side the Austro Hungarian troops who were trying to protect a nearly collapsing Empire. And on this arid and colourful upland, history set up its natural stage. A theatre of war, described as «a desert of stones and blood», still remembered with compassion today. It was not by chance that the Isonzo Valley was later visited by unusual tourists in the post-war period: i.e. by the former soldiers of the Italian and the Austro Hungarian troops returning to the same places where bloody battles had taken place from 1915 to 1917. Simultaneously, as this phenomenon became common in all Europe, the most famous tourist guides started to include these unusual battlefield itineraries.

The former soldiers and their relatives have recently been replaced by a new generation of tourists. Less sombre tourists, people fond of the so-called military tourism, yet who are often real globetrotters and are keen to visit the battlefields of Europe (from Waterloo to Normandy). There are many interesting sites along the border with Slovenia. Some of them have only recently become accessible since 1991 and are the real symbols of the Great War.

We suggest the route from Monte Sabotino along the Isonzo front, (the strip of land leading from the Monte Nero to the mouth of Punta Sdobba). It covers an intricate network of galleries, trenches, open air monuments and memorials which are viewed with astonishment, fascination and dismay even by the better informed visitors. Time has stopped here. A sad silence arises from a remarkable wild landscape as a reminder of the battlefields, disturbed only by the fortifications dug in the rocky soil.

If we look at the arid tracks winding along the crest of the Mount Sabotino, it is difficult to believe that thousands of soldiers fought for a strip of Karst whilst literally clinging on the rocky spurs above the Isonzo river.

From this point, the Gorizia Karst winds along the whole valley. (the Slovenian side bears the name of Goris¡ka Brda). The Collio is a very small area known all over the world for its top quality wine as well as for the bloody and cruel battles which occurred between 1915 and 1916. These battles were remembered by the famous war correspondent Alice Schalek. She reported that Oslavia was a dead land, as mortally wounded as the fallen of its territory. Today, Oslavia gives the impression of an idyllic, quiet place, only disturbed by the impressive ossuary tower.

In this area, distant only a few miles from the “iron curtain” which separated the West from the East for half a century, the silence of nearly sixty thousand fallen reposed in the few regiment cemeteries not pulled down in the 30s, seem to reveal how a peaceful coexistence of different populations can be both fragile and yet necessary.

This attitude, however, has two faces. On one hand, cooperation activities, trade over the border and cultural exchanges (Gorizia was said to be the most open border in all Europe during the dark 70s), on the other hand diffidence, closeness towards the Slavic world, which was too different and unknown to be accepted without fear. Slovenia has planned to enter the European Community in 2004 as well as the removal of the border between the two countries after the following years. And so, uncertainty will fade away and a new monument, another emblem of the past, will be probably erected.

Separation is a recurrent theme proposed by the tourist offer of the Isontino area. The Museo della Grande Guerra (Museum of the Great War) has represented the heritage from the main provincial museums since 1990. It also features the collection of the Museo della Redenzione (museum of the redemption) which was hosted by Palazzo Attems from 1924 to 1983. The museum has been designed to offer a hint for reminiscence as well as an impartial version of the dramatic war events from which only a message of peace shall arise. It features an interesting study centre which has never ceased to innovate in terms of collections and layout solutions. In fact, in 1999, on the occasion of the 50th anniversary of the Divisione Alpina Julia (alpine troops active during World War I) a thematic exhibition was added to the existing cultural itinerary. Today, it represents the main reference point for all of the study activities related to the First World War. It combines efficaciously the art of collecting with the historical analyses and historiography introspection so as to answer to the only question made by those who have visited all the battlefields. Why has war occurred?

From Gorizia, a town ready to promote the visible war tracks in the nearby areas (the Ossuary-Podgora well serves this purpose as a remarkable open air museum), it is easy to reach the Carso, the limestone barren land mentioned in Scipio Slataper’s songs, a war volunteer who had been killed next to the Ossuary. The Carso represents a war memorial for a whole generation of Italians, Hungarians, Slovenians, Austrians, Bohemians and Rumanians. Today, it is included in many tourist guides promoting the area, such as the Hermada, which represents a challenge for a type of integrated tourism, going beyond the usual frontiers.

And exclusively in this area, the “dodici battaglie dell’Isonzo” (the twelve battles along the Isonzo river) took place on 8th August 1916, which concluded with the takeover of Gorizia by the Italian Army.

Along these tracks across a bare territory, changing into bright colours in Autumn, visitors come across many memorials and museums which recalls the sacrifice of the Sacrario di Redipuglia, “the Cemetery of the Undefeated of the Third Battalion”.

Constructed in 1938, it is a national monument dedicated to the over one hundred thousand of fallen warriors who rest in peace beneath a flight of twenty-two white steps.

A surreal scenario in which the perspective leads the visitor’s eyes towards the sky and to the three bronze crosses placed on top of this unimaginable “stairway to heaven”. At the foot of the huge monumental area, built on a side of the Mount Sei Busi, centrally lies the huge tomb of the Duca d’Aosta, which hosts the Commander of the Third Battalion and his generals. On 4th November of every year, the high offices of State attend the Armed Forces Day which in particular commemorates all the fallen of the Carso, who died during one of the most dramatic events of the 20th century.