Cicchetti The Perfect Snack in Venice

CICCHETTI: A VENICE SNACK Cicchetti are Venetian tapas—finger foods such as calamari rings, speared fried olives, potato croquettes, and grilled polenta squares, traditionally washed down with an ombra (shadow), a small glass of wine. Pronounced “chee-KET-eeh,” cicchetti are Venice’s answer to Milan’s aperitivo and to Spain’s tapas. They’re small plates of food, usually nibbled over glasses of wine and among friends in the evening or at lunchtime. Served at bàcari (“BAH-car-eeh”), small, local bars hidden all over Venice, they’re also cheap, ranging from about €1 to €3. What’s on offer depends on the place; some bàcari lean toward fried offerings, while others specialize in fresh fish, meats, cheeses… the list goes on. Try it as a pre-dinner snack, or make a whole meal out of it by ordering several plates. We like the idea of a cicchetti “crawl” ourselves. Especially because your meal of cicchetti probably comes cheaper, better, and in a more local atmosphere than food in most restaurants in Venice! Some tips on your Cicchetti Search: First, for an evening cicchetti crawl, make sure you start early (at about 6pm), since many bàcari close at 8pm or 9pm. Of course, if you’re just getting used to the Italian tradition of eating at 8 or 9pm, then the early closing will not be bad, you will still have time to sit down for a meal later. Second, if you’re someone who can’t stand crowds or the possibility of having to wait in line and/or stand while eating, then be prepared to sacrifice or at least seek out bàcari that are off the beaten path. Bàcari are where Venetians come to socialize and relax, and some of the more popular places, including those listed below, can get quite packed; which adds to your people-watching potential, but can be a little frustrating if you were hoping for a quiet, tranquil dinner! Just to get you started, here are some of Venice’s most-loved places to find delicious cicchetti: Ca’ d’Oro/Alla Vedova - Calle del Pistor, Cannaregio 3912. One of the most famous bàcari in Venice, this one’s both away from the city’s crowds and on the cheap (€1) end of things, ideal if you’re on a budget. Don’t miss the polpette, meatballs made of pork. La Cantina - Calle San Felice, 3689. A stone’s throw from Alla Vedova, La Cantina features inventive dishes, using fresh ingredients like beef tongue or fresh ricotta. A local favorite.  This isn't just a popular area for tourists... it has some of the best bàcari in town! All’Arco - Calle Arco, San Polo 436. Another one of Venice’s most-loved spots, All’Arco, near the Ponte Rialto, is packed at lunchtime with shoppers from the local fish market. Everything from calamari to liver to shrimp is on offer, and if it’s available, don’t miss the hot sandwich of boiled beef sausage and mustard. Do Mori - Sestiere San Polo 429, Calle dei Do Mori. Myth has it that Casanova frequented this bàcaro, also near the Rialto Bridge. Even if he didn’t, it’s still thought to be the oldest in Venice, dating back to 1462. Ask for the “francobollo” (postage stamp)—a tiny sandwich with various fillings, it’s the house specialty. Do Spade - Calle delle Do Spade, 19 S. Polo 860. Another bàcaro dating back to the 15th century, Do Spade has lots of seafood on offer, as well as a variety of vegetable and cheese spreads. Cantinone–già Schiavi - Ponte San Trovaso, Dorsoduro 992. This family-run bàcaro, located across from a gondola workshop, boasts raw fish, meats, more than 30 wines available by the glass, and much more. Crowded with Venetians in the evening! Al Ponte - Calle Larga Giacinto Gallina. One of the cheapest bàcari—and, therefore, places to eat—in all of Venice, Al Ponte has pasta and fish plates and a welcoming atmosphere. Banco Giro - Campo San Giacometto, San Polo 122. A Grand Canal view, a variety of cheeses, fish, and wine, and a lively atmosphere. What’s not to like? Hope you enjoy one of these great treats in Venice along with a 'umbra of wine'. 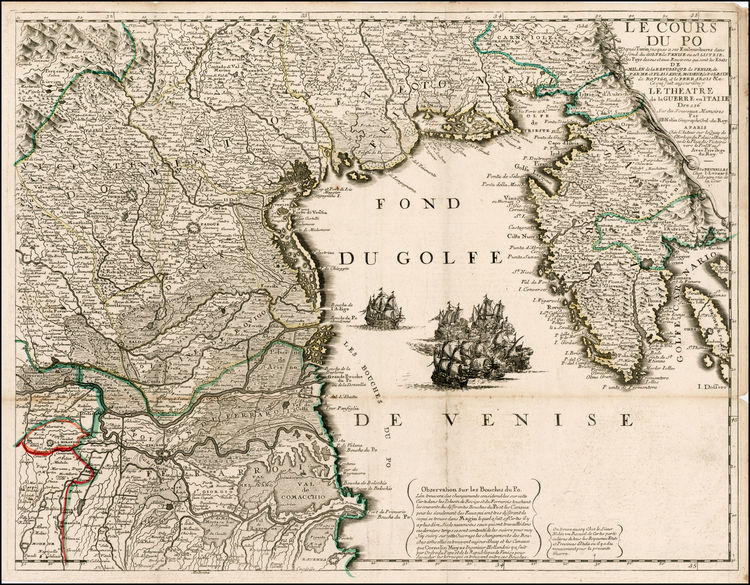 The Gulf of Venice is a gulf that borders modern-day Italy, Slovenia and Croatia, and is at the north of the Adriatic Sea between the delta of the Po river in northern Italy and the Istria peninsula in Croatia. On average the gulf is 34 meters deep. It is the home of the popular destination island Albarella. The Tagliamento, Piave, Adige, Isonzo, Dragonja, and Brenta rivers run in to it. Major cities that lie on it are Venice, Trieste, Koper, Chioggia and Pula.

Anyone visiting the City of Venice should head for first the heart of the city, Even if you arrive at the train station take a water bus to Saint Mark’s Square, arriving from the sea is the traditional way to enter Venice. Saint Mark's Square is Venice's only square and is surrounded by an artistic complex of buildings. Each structure is in a different styles having been built at different times during the Republic of Venice's reign and they have created a unique harmonious setting to the square that added to the grandeur of the city.

We start our walk at the waterbus stop in San Marco Square.

Your first sight is THE DOGE'S PALACE: the entrance is through the Porta delIa Carta. This is a monumental entrance in floral Gothic style that contains two bronze well-curbs. The courtyard is surrounded by porticoes with a top loggia. On the eastern side there is the Scala dei Giganti ('Giants' stair­case). It is thus called because of the two large statues by Sansovino at the sides. The stairway goes up to the loggia but to reach the top floors we go up the Scala d'Oro ('Golden staircase). It owes it name to the lavish frescoes and gilded stucco work. It was from the Doge's Palace that the Venetian Republic was ruled and it is still the best example of Venetian art. It was the residence of the Doge and the seat of the main government departments. As one walks through its rooms the history and glory of the Venetian Republic is revealed in its paintings and sculptures.

Next to the Doge's Palace there is SAINT MARK'S BASILICA, which at one time could be reached from inside the Doge's Palace. The Basilica is a wonderful example of Byzantine Venetian architecture. It was at one time the Doge's chapel but it was also the mausoleum for Saint Mark, the patron saint, whose life is narrated in the golden mosaics on arches above it’s entrance.

SAINT MARK'S SQUARE It is trapezoidal, and the Procuratie Vecchie and Procuratie Nuove run along the two outer sides. They are known as old ('vecchie) and new ('nuove) on the basis of the age of the buildings over the arcades of the ground-level porticoes. The Procuratie Vecchie run along the north side of the square from the CLOCKTOWER and has kept their Renaissance features. They are followed by the Ala Napoleonica ('Napoleonic Wing). This was built in 1810 by the architect Giuseppe Soli on the site of the demolished San Geminiano church, which had been built by Sansovino. The Procuratie Nuove's run along the west side of the square and includes the Libreria di San Marco, which was designed by Jacopo Sansovino at the request of the Venetian Republic to house the codicils donated to it by Cardinal Bessarione. The clock tower is at the start of the Merceria, the road that leads from Saint Mark's Square to the Campo di San Bartolomeo. The name 'Merceria' comes from the shops and stands that have always lined the street.

Opposite the Doge's Palace there is the ARCHAEOLOGICAL MUSEUM. This houses the famous collections by Domenico Grimmli and his nephew Giovanni of original Greek marbles and a coin collection from the church of Santa Maria Formosa. Upon leaving the Ala Napoleonica, just after the "Socca di Piazza", we come to the church of San Moise. This originally eighth century building was rebuilt in the tenth century by Mose Venier, who wanted to dedicate it to the saint after which he was named. We then come to Calle Larga XXII Marzo. This was built in 1880 by widening Calle San Moise and contrasted with the lower surrounding buildings. Today, this road is lined with shops as far as Socca di Piazza. These shops were host the most famous names in gold jewelers, leather goods and international and Italian fashion and offer for sale their latest and finest products. Halfway down Calle Larga XXiI Marzo turn right into Campo San Fantitl where the church of San Pantin stands. This dates back to the ninth century but was rebuilt in the sixteenth century by Scarpagnino.

Opposite, there was the LA FENICE OPERA HOUSE. This was originally built in 1790 to a designed by Selva. It burnt down in 1836 but like the phoenix ('fenice' in Italian) it was rebuilt in the same style by Meduna in just over a year: The opera house reflected the spirit of Venice of the time. It was destroyed by the fire of 1996 but the determination of the Venetians has brought it back to 'the way it was'. Making your way back into Calle Larga XXII Marzo and continue until we reach Campo di Santa Maria del Giglio or Campo di Santa Maria Zobenigo with a church dedicated to this saint. "Zobenigo" is a reference to the Jubenigo family, who had the church built in the tenth century. On the inside is a room decorated with the works of painters from the seventeenth and eighteenth centuries. In the small sacristy, apart from the liturgical silverware, there is also a painting by Rubens.

Next you arrive at CAMPO SANTO STEFANO. This is enclosed by fine palazzi that were the residences of important families. The palazzo of the Pisani di Santo Stefano family has housed the MUSIC CONSERVATORY since 1897, which is named after the Venetian composer Benedetto Marcello. The CHURCH OF SANTO STEFANO, after which the 'campo' is named, was built by the Augustinian's in the thirteenth century together with the adjoining monastery. It retains its Gothic appearance although it has been modified inside.

Foundations of the Teatro a Sant' Angelo . The first theatre stood here, which was to make the dramatist Carlo Goldoni famous.

Calle dei Bombaseri . This street contained the shops and workshops of the cotton manufacturers ("bombaso" - Venetian dialect for 'wad of cotton').

Riva del Carbon . This was the only place in Venice in which the law of 1537 permitted coal to be unloaded.

Calle del Fontego dei Tedeschi ('Street of the 'Germans'). The Venetian Republic welcomed strangers and allowed individual foreign communities to have shops for their merchants and ambassadors ('fontego' is itself an Arabic corruption of the Italian 'bottega' or 'shop').

Ponte dei Ferali . The lamp-makers lived and worked in this area. In 1737 street lighting was decreed for the city ('ferali' is a Venetian word for lamps).

Ponte de la Pagia . Barges loaded with straw for the animals would stop underneath this bridge ("pagia" is Venetian for 'straw').

Riva degli Schiavoni . The ships from Dalmatia would tie up here. The Dalmatians were also known as 'Schiavoni'.