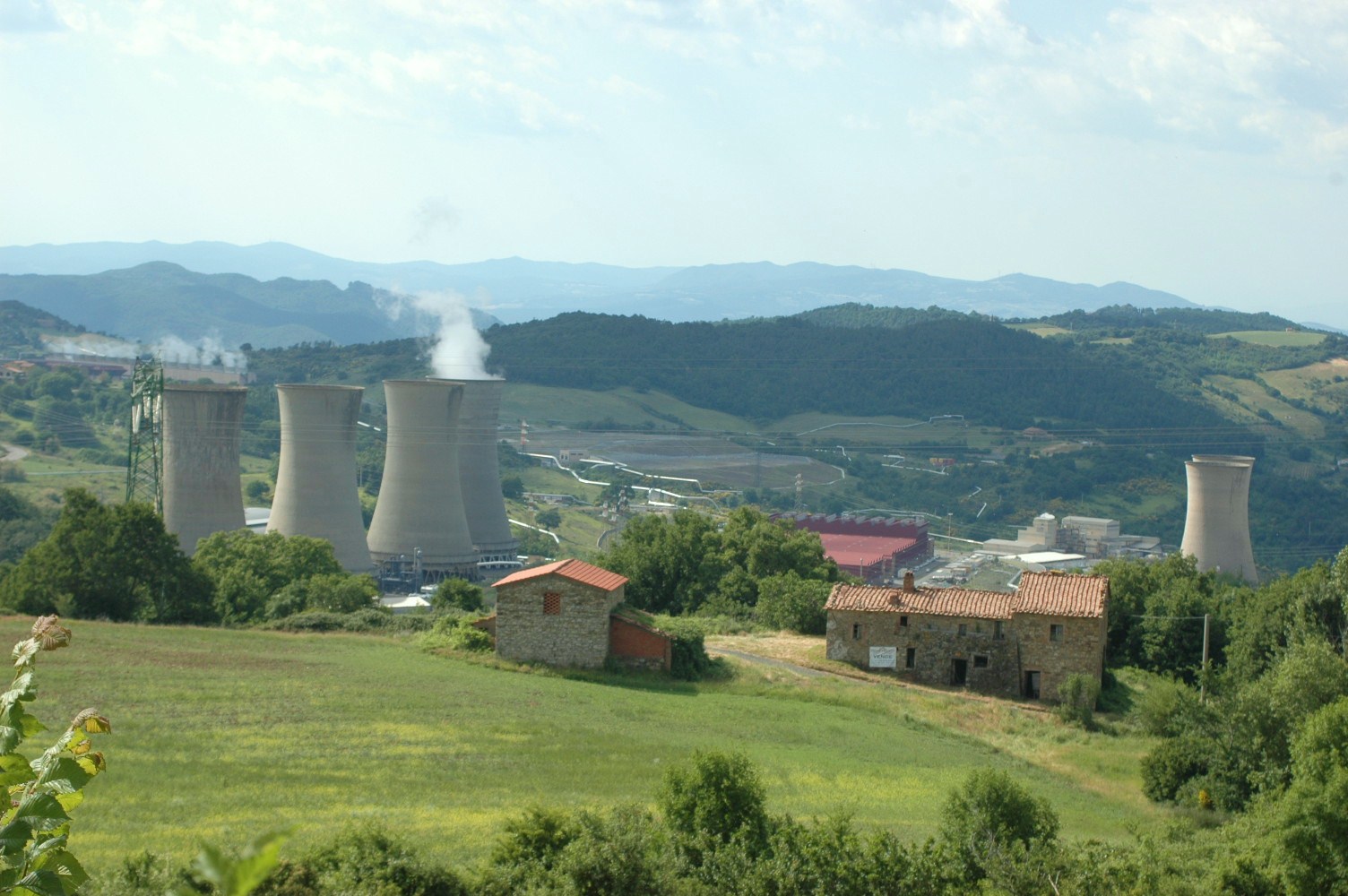 Larderello is an industrial village in a geologically active area of the Val di Cecina of southern Tuscany which is famous for its geothermal activity. The region has been known since ancient times for its volcanic characteristics and its exceptionally hot geothermal springs. The Romans constructed baths to make use of its sulphur springs. The Larderello area was known simply as Montecerboli or Valle del Diavolo (Devil's Valley) until the mid-19 C, when it became one of the first places in the world where geothermal energy was exploited to support industry. In 1827, François de Larderel, a Frenchman, invented a method of extracting boric acid from the volcanic mud by using geothermal steam to heat cauldrons for the separation process. Leopold II, Grand Duke of Tuscany was an enthusiastic supporter of de Lardarel's scheme and awarded him the title of Count of Montecerboli a decade later. A village near Montecerboli and named Larderello in honour of de Larderel's work, was founded to house the workers in the boric acid production facilities.

The region was the site of a pioneering experiment in the production of energy from geothermal sources in 1904, when five light bulbs were lit using electricity produced by turbines driven by steam emerging from vents in the ground - the first ever practical demonstration of geothermal power. In 1911, the world's first geothermal power plant was built in Montecerboli. It was the world's only industrial producer of geothermal electricity until 1958, when New Zealand built a plant of its own. Larderello now produces 25% of Tuscany's electricity requirements. The geology of Montecerboli makes it uniquely conducive to geothermal power production, with hot granite rocks lying unusually close to the surface, producing steam as hot as 220° C (396° F). The region has experienced occasional phreatic volcanic eruptions, caused by explosive outbursts of steam trapped below the surface. It possesses about a dozen explosion craters 30-250 m in diameter. The largest is the Lago Vecchienna crater, now filled by a lake, which last erupted around 1282. 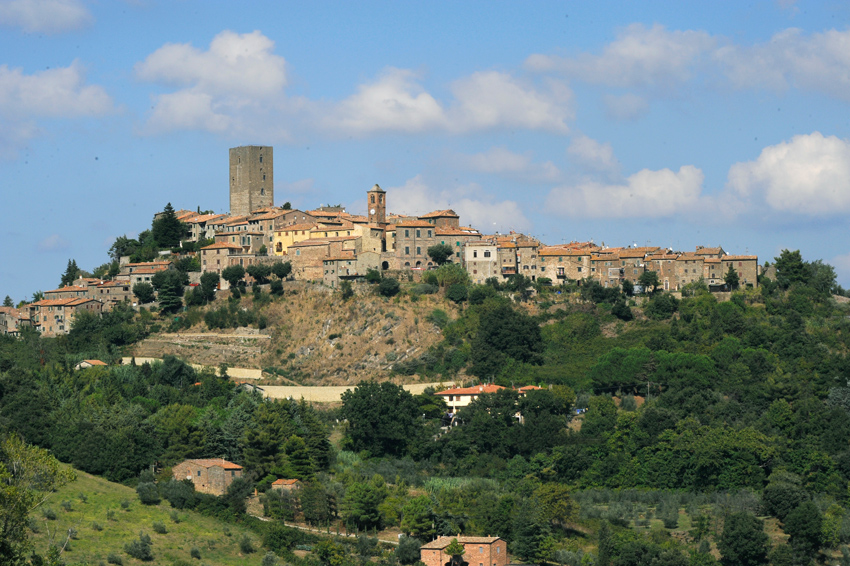 The Val di Cecina of Tuscany, Italy, extends from the coast, where the town of Cecina and other tourist resorts are located, as far as the famous hill top town of Volterra, perched on a rocky spur at 500 m. The Cecina Valley is still today among the most remote areas in Tuscany and well of the beaten track for tourists. The Valley extends along the River Cecina in the south of the Province of Pisa and takes in parts of the Provinces of Sienna and Grosseto. It also extends a short distance into the central portion of the Province of Livorno, near the final stretch and mouth of the river.

The Val di Cecina is hilly in the hinterland but mostly flat near the mouth of the Cecina. It is quite famous for the steep ravines, known as Balze di Volterra, which are found near Volterra. The area is also rich in geothermal activity including geysers, hot pools and steam outlets in the area around the village of Larderello near Pomarance.

The part of the Val di Cecina that extends along the foothills sloping down to the Maremma Livorno and the central part of the Etruscan Coast is also called the Maremma Pisana and includes the municipalities of Castellina Marittima, Riparbella, Montescudaio, Guardistallo, Casale Marittimo and Monteverdi Marittimo.

The Upper Cecina Valley, in the southern part of the Province of Pisa, comprises the districts of Castelnuovo Val di Cecina, Montecatini Val di Cecina, Pomarance and Volterra. The area is bordered to the west by the Cornia Valley and the lower Cecina Valley, to the north by the Era Valley, to the east by the Upper Elsa Valley and to the south by the Colline Metallifere of the Alta Maremma. 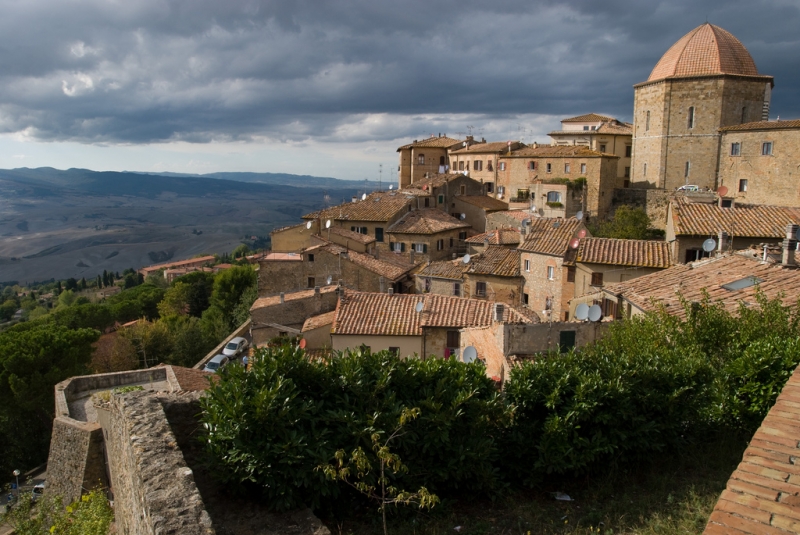 Volterra is a town of great architectural interest located 1770 feet above the sea level, between the rivers Bra and Cecina in Tuscany, Italy. The main features are two fine castles and numerous Etruscan remains. The ambience of Volterra is extremely attractive, easily rivaling that of the more famous Tuscan destination of San Gimignano.

Volterra stands on a rocky hill some 1770 feet above the sea level, located between the rivers Bra and Cecina, and is surrounded by strong walls. The district is rich in alabaster, the working of which was an important industry of the city, and in mineral waters, such as those of S. Felice and the Moie, or salt springs. Still more important are the Soffoni of Larderello, from which boric acid is extracted, the sulphur lake of Monterotondo, the copper springs of Caporciano, and the baths of Montecatini Val di Cecina.

The Cathedral (duomo) of Volterra, consecrated by Callistus II in 1120, was enlarged by Andrea Pisano in 1254, and again in 1576. The high altar is adorned with sculpture by Mino da Fiesole. Among the pictures is an "Annunciation" by Luca Signorelli, and there are pictures by Benvenuto di Giovanni, Leonardo da Pistoia, and others. In the baptistery (1283) are a font by Sansovino and a ciborium by Mino da Fiesole.

In the Etruscan period, Volterra, called Felathri by the Etruscans and Volaterrae by the Romans, was one of the most important cities in the Etruscan Confederation. From the period of the kings, it was at war with Rome. In 298 B.C., when he became consul, Scipio gained a victory here over the Etruscan armies. In the Punic Wars, however, the city was allied with Rome. In 80 B.C. it was taken by Sulla, after a siege of two years. Remains of the ancient surrounding walls, including the Etruscan the Porta dell' Arco, may still be seen, as well as of baths, an aqueduct, an amphitheatre (see picture below), and, above all, of several Etruscan burial places.

In the Carlovingian period, Volterra belonged to the Marquisate of Tuscany. With the approval of Henry, son of Barbarossa, the government of it afterwards passed into the hands of the bishop, until his temporal authority was suspended by the commune. In the wars or factions of the thirteenth century, Volterra, being Ghibelline, was continually embroiled with the Florentines, who captured it in 1254, but obtained definitive possession of it only in 1361. In the middle of the city rises the Rocca Vecchia, built in 1343 by the Duke of Athens and enlarged by the Florentines. In 1472,  it attempted a rebellion against Florence but without success, and was then deprived of many of its rights.

The richness of the Etruscan finds made in and near Volterra make it a mecca for enthusiasts of all things Etruscan, with an unparalleled collection of Etruscan antiquities being displayed in the Guarnacci Museum.