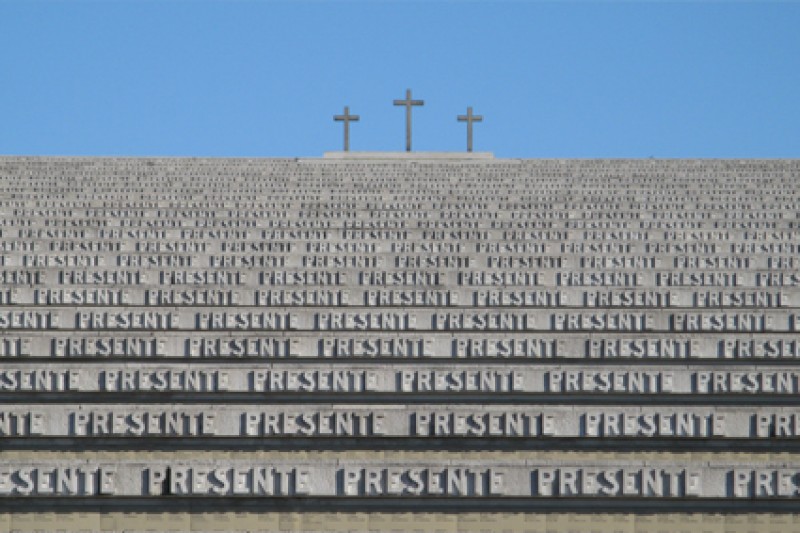 Fogliano Redipuglia (Bisiac: Foian Redipuia) is a comune (municipality) in the Province of Gorizia in the Italian region Friuli-Venezia Giulia, located about northwest of Trieste and about southwest of Gorizia. , it had a population of 2,797 and an area of .All demographics and other statistics: Italian statistical institute Istat. The municipality of Fogliano Redipuglia contains the frazioni (subdivisions, mainly villages and hamlets) Fogliano,Polazzo, and Redipuglia. Fogliano Redipuglia borders the following municipalities: Doberdò del Lago, Gradiscad'Isonzo, Ronchi dei Legionari, Sagrado, San Pierd'Isonzo, Villesse.

World War I memorial of Redipuglia, resting place of approximately 100,000 Italian soldiers. More than 650,000 died on the battlefields of World War I.]] Fogliano Redipuglia lies at the eastern end of the shifting front of the Italian Campaign against Austria-Hungary (and Germany) in World War I, and today is home to Italy's largest war memorial on Monte Sei Busi in Redipuglia. The campaign overall featured the dozen or so Battles of the Isonzo including a number in this area but especially the Battle of Caporetto, a heavy defeat for the Italians with 11,000 killed, 20,000 wounded and 265,000 captured. As points of interest, famed WWII German officer Erwin Rommel fought in this battle as a junior officer, and American author Ernest Hemingway drove an ambulance for the Italian Army (see A Farewell to Arms). After Caporetto, the Austria-Hungarian advance was forced to stop anyway due to lack of supplies, and after almost a year the Italians were able to reinforce and regain this territory by destroying the Austro-Hungarian Army in the Battle of Vittorio Veneto, which defeat led to the final end of the Austro-Hungarian Empire. The huge war memorial from 1938 contains the corpses of 39,857 identified Italian soldiers, and 69,330 unidentified. In a nearby cemetery are buried another around 14,000 Austro-Hungarian soldiers. Trench fortifications can be seen next to the war memorial, as well as a display of large WWI artillery pieces. Pope Francis visited Redipuglia's military memorial on 13 September 2014 to mark the centenary of World War I to pray for those who died in all wars. 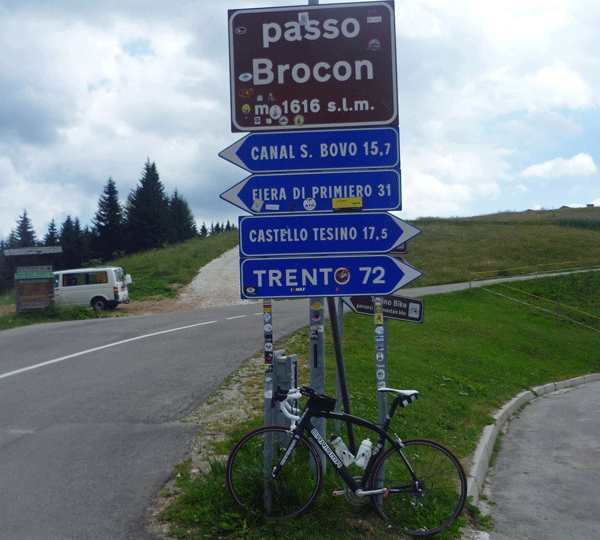 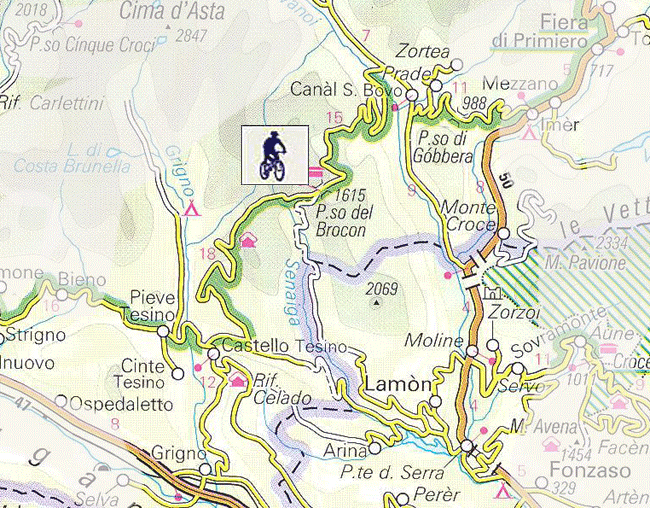 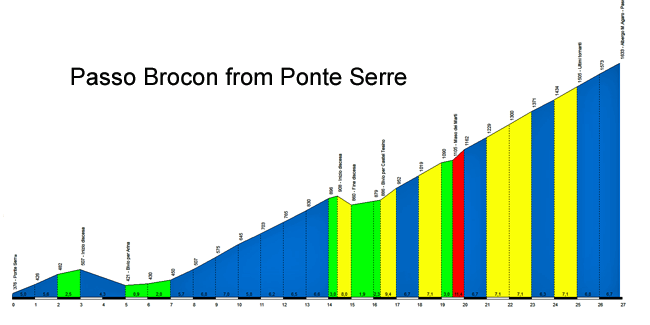 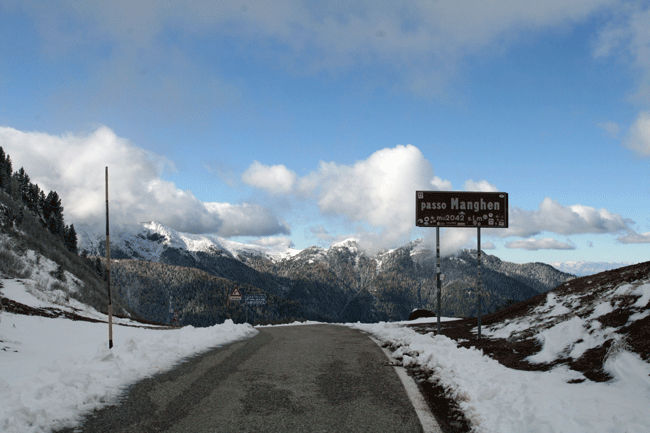 Passo Manghen sits at 2047 meters a.s.l., int eh Lagorai Mountain Group of the Italian Dolomites.  Located in the Trentino Alto Adige Region Paso Manghen connects the town of Borgo Valsugana with the town of Molina in the Fiemme Valley. The Manghen Pass is not well known outside of Italy, but it is one of the classic climbs of the Giro d'Italia, and on most local cyclist to do list.

To reach Passo Manghen by bicycle there are two start points.  The classic and hardest route is from Borgo Valsugana, 23 km in length, and just over 7% average grade. From Molina the bike climb is shorter at just over 16 km, and the average grade is 7.4%, but there are no extreme grades of 15% like on the southern side.  This is a great early season ride but since the road is not open to commercial traffic it is not always cleared of snow. During the summer months this is a popular motorcycle route so riding on a Sunday can be busy. 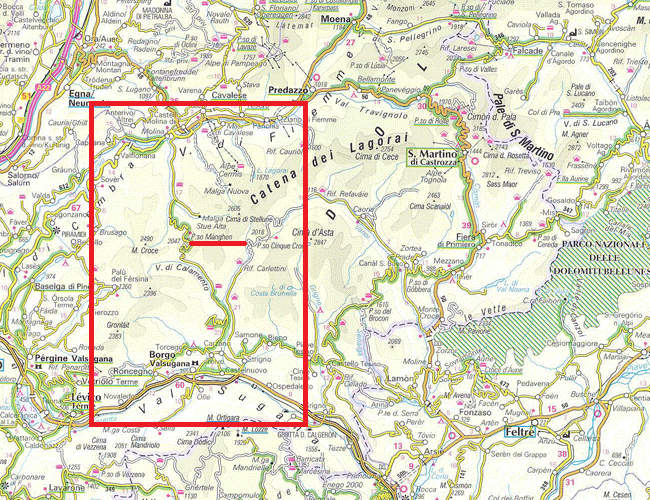 Located in the Trento Province you can get a train from the city of Trento to Borgo Valsugana or a Train from Bassano del Grappa in the Veneto Region.  The closest train station Molina, on the northern side is Ora/Auer, you can get a bus from here to Molina.

If you are arriving by bicycle you can ride the Valsugana bike path from Bassano del Grappa or Trento.  I would not ride the State Road from Ora/Auer since there is heavy traffic, but you can ride the Provincial road 632 from Trento.  If you are arriving from the central Italian Dolomites you can your the Fiemme Valley bike path from Predazzo, the passes of: Passo Lavase, Passo Rolle, Passo S. Pellegrino, Passo Brocon, and Passo Costalunga all can be connected to Passo Manghen.

Passo Manghen is one of the many classic bike routes you should ride if you are visiting Italy. Passo Manghen is located in the Lagorai Group of the Dolomite Mountain, in the Trento-Alto Adige region. The pass connects the valley of Valsugana with the Fiemme valley, and links the two towns of Castelnuovo and Molina. Sitting at 2047 meters (6,716 ft.) it is amongst the highest roads in Italy and the climb itself is rated in the top 20. (for Italy). 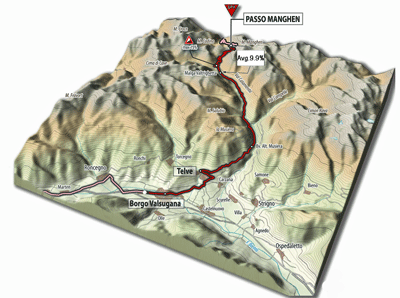 The pass of Manghen has been part of the Campagnolo granfondo for several years and in 2008 the Giro d'Italia passed over on it's way to finishing in San Martino di C. This year the 2012 Giro d'Italia will be passing over Passo Manghen once again.  This is a great ride and much more challenging then it looks on paper.

Maps: This climb is on both the Touring Club Italian Trentino-Alto Adige Region map and Veneto Region  Map.

The best time to ride this route is between June and October.  The pass could be open in other months depending on snow conditions. 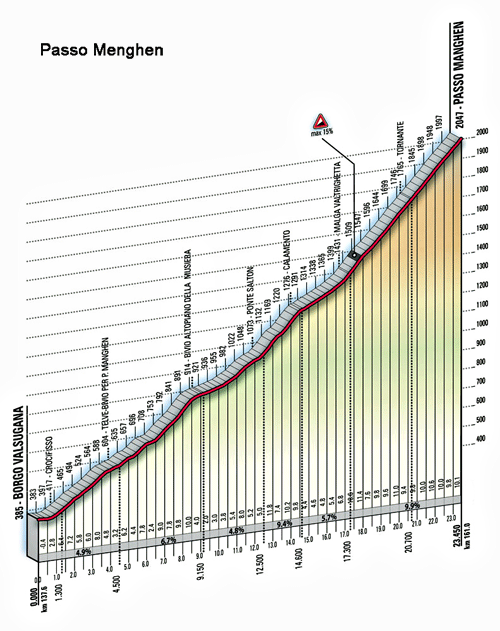 GETTING TO THE RIDE

Passo Manghen can be reached by riding the Valsugana bike path from Trento south or north from Bassano del Grappa.  If you wanted to ride just the climb you can take the train that runs between Trento and Bassano del Grappa, getting off in Borga Valsugana

The Ride from Castelnuovo to Passo Manghen

The Passo Manghen bike climb is a great bicycle tour to do while you are Italy. This is a very isolated climb so you should consider doing the ride supported or as part of a group.  If you are planning on doing just the ascent and descent from Castelnuovo or Borgo Valsugana you should have no problems.

The Valsugana Bike Path that runs from Lago Caldonezzo to Bassano del Grappa. If you are arriving by bicycle riding from Bassano you can start the climb from Castelnuovo or Borgo Valsugana.  Riding from Trento you should just start the climb at Borgo Valsugana.  There is also a small train that runs between Trento and Bassano del Grappa that offers bici-train service. You will need to get off at the Borgo Valsugana stop. If you are driving I would park in Castelnuova, there is a free parking area (except Saturday morning) where as Borgo Valsugana most of the parking is pay.  For more options on organizing the ride or questions contact me via email.

Starting from Castelnuovo just need to follow the signs for Passo Manghen. The first 2·km is up to a rotary that links you  with the road from Borgo Valsugana and you are always following the signs toward Passo Manghen. My computer was reading 6% for most of the way up this section. After the rotary you have a section averaging 4.9% until you reach Telva, you do not actually go into the town, the main road contours around and at the 4.4 km point you will turn right following the signs toward Passo Manghen. Up to this point this is the most scenic part of the ride with some great views of the Valsugana in the direction of Bassano del Grappa and the Asiago Plateau.

After Telva and turning right you start riding though the val Calamento forest for a little more than 4 km. This section averages 6.7% and has sections up to 11%. On my computer it showed 12 and 13% several times. Around the 8 km mark there is a small bar on the right if you need supplies or restroom this is generally you last open establishment on most days.

At about the 9.2 km mark the climb will lessen to about 4.8% average until you get to the 12.5 km point. This is the best place to refuel and drink, try to resist driving hard during this section or you will pay later. There are a couple of fountains along this section be sure to fill up because after val Calamento village there is only a couple of mountain streams if you run out of water.

From the 12.5 km point you are nearing the village of val Calamento. ·From here you are riding 9.4% average with most of the next 2 km be greater than 10% with a short section reading 12-13%.  After the village the road narrows and you will have a length of road that will average 5.7% up until the 17.4 km mark.  This is also the first time you will get to see the pass in the distance.

From the 17.4 km mark you will now face the hardest part of the climb. The average grade up to from this point is 9.9%, and you will have just over 7 km remaining. There are several points of 12 and 13% as the road crawls up the bowl leading to the pass. 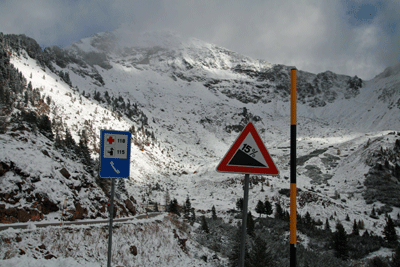 At the pass there is the sign post and a cross. If you continue over the pass and about 100 meters down on the Molina side is a Refugio that is generally open. But plan on being alone and self sufficient. 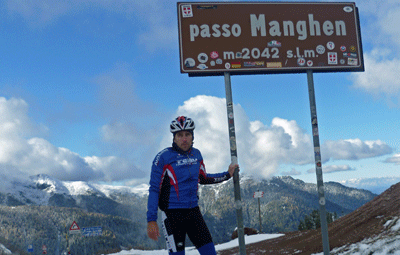 During the descent back down the valley there were two to three sign posts for 15%. Also, my computer read about 2 % harder in many of the listing on salita.ch's and city bikes profiles. The profile I posted is from the 2008 official Giro altimeter and even it has a few different reading then my computers.

There is little during traffic during the week days, but this pass is on the motorcycle touring list so on Saturday and Sunday there can be several motorcycles on the road, I would try to schedule my ride on a different day.

The bike climb up to Rifugio Panarotta is in found in the Val Sugana, Trento Province.  The climb is not very well known but it is surprising that it is very similar to Alpe d'Huez in length, grade, and difficulty, the only major difference is the number of switchbacks. 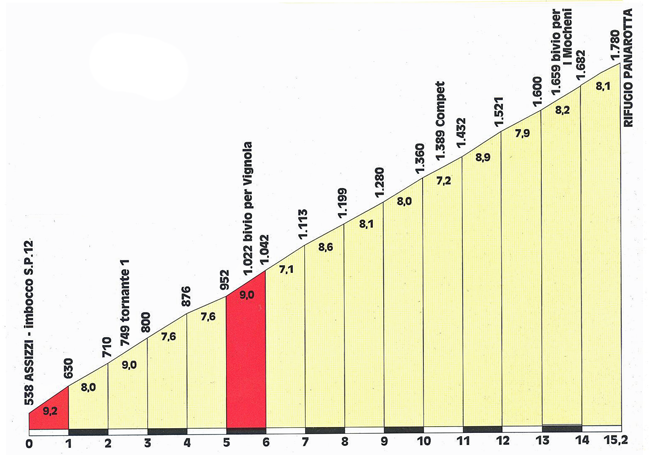