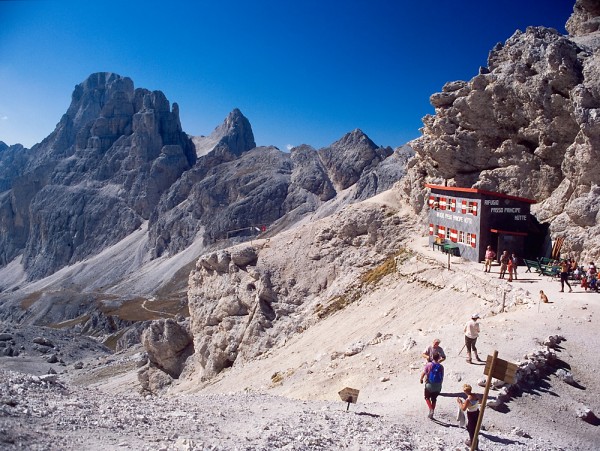 Three Day Hiking Tour at upper altitude through one of the Dolomites most spectular landscapes.  The Catinaccio and Rosengarten group is part of the UNESCO hertiage site.

DEPARTURE POINT: Pozza di Fassa, there is a bus up to rifugio Gardeccia: 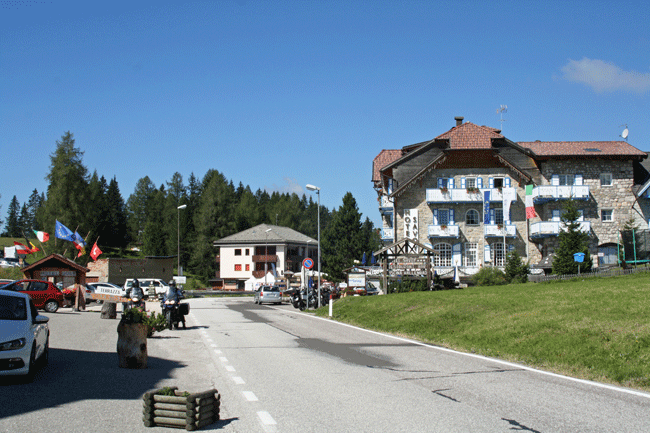 Passo Costalunga sits at 1745 meters a.s.l. and is located in the Bolzano Province of the Trentino Alto Adige Region.  Passo Costalunga (know as Karerpass in German) separates the Italian Dolomites of the Catinaccio Mountian Group to the north and the Latemar Mountain Group to the south.  The state road was built in the late 1800's, when the area was still controlled by the Austrian Empire, to connect Nova Levante with Vigo di Fassa. Later in the 1930's the road was enlarged by the Italian's into two lanes.

Passo Costalunga is a popular escape for the people living in Bolzano and the surrounding valley.  Therefore, it is busy on the weekends, and because the road is well built it has more local traffic.  The Pass is well known for several lovely mountain walks, in the winter time there is a small ski area.  For a cyclist it is a great route to transfer from the Fassa Valley and the Italian Dolomites over to Bolzano and the Italian Alps. 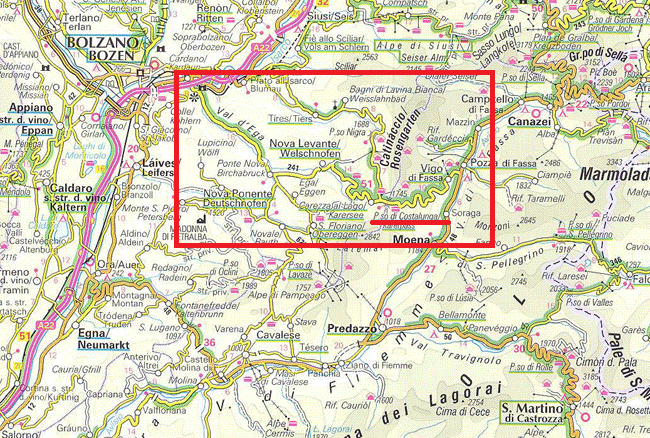 By train you need to arrive to Bolzano and then you can get a regional bus that goes to Vigo di Fassa and stops in Passo Costalunga.  If you are cycling the ride from Vigo di Fassa is recommended the other side from Bolzano can be heavy with traffic.  There is a bike path running from Predazzo to Pozzo di Fassa which will keep you away for the heavy traffic down the Fiemme Valley.

Passes that you can ride in the area: Passo Nigra, Passo Lavaze, Passo San Pellegrino, or Passo Fedaia.

WHERE TO STAY WHEN VISITING  PASSO COSTALUNGA ITALIAN DOLOMITES

Bolzano has the best after active events and is an easy ride up to the pass by bus car.

There are several hotels in the pass of Costalunga

Rifugio and Bivacchi in the Catinaccio Mountains 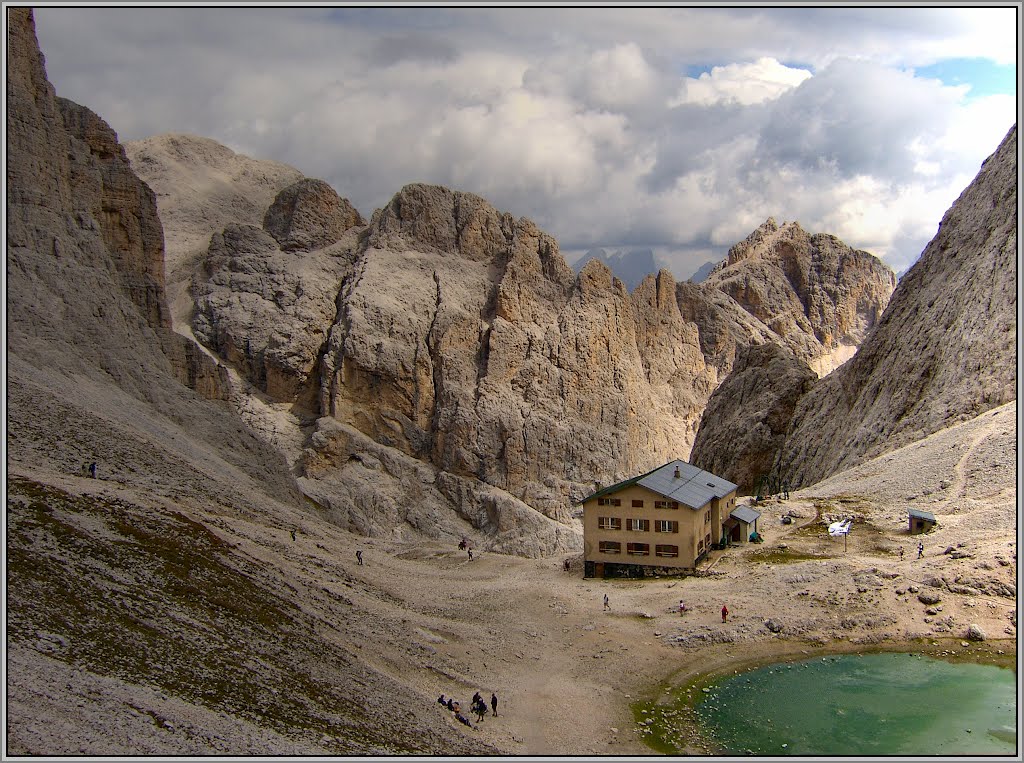 The Catinaccio/Rosengarten mountain group of the Dolomites is not a large range, but it has a high number of ‘Rifugi’ (Alpine huts). This is both good and bad: good because it has opened up many great trails and ascents throughout the group, but bad high number of tourists, hikers and mountaineers in the area, especially during the summer months.  Plan ahead and expect more crowds the closer you stay to the main transportation points.

The Ciampediè Rifugio (1,998 m, open in the summer season but also in winter) is situated in the township of Vigo di Fassa,  which it can be easily reached via cable car (like the Rifugio Negritella, 1,950 m; open summer only), but it can also be accessed via chairlift from Pera di Fassa. There are various walking connections which can be used by excursionists; between Rifugio Ciampediè and Rifugio Gardeccia, for example, one can follow the characteristic “Sentiero delle Leggende” – a walk suitable to all, which explains with wooden boards the most popular Legends of the Dolomites, such as the one on King Laurin just mentioned above, so important to this the area.

The Gardeccia Rifugio (1,949 m; summer only), as mentioned above, the Gardeccia is connected to the Ciampediè hut by a trail, and is located within the township of Pozza di Fassa; together with Rifugio Catinaccio (1,946 m) and Rifugio Stella Alpina (1,972 m) (both summer only) all three huts can also be reached from Pera di Fassa by shuttle service.

The Vajolet Rifugio (2,243 m; open summer only) is another Alpine hut within the territory of Vigo di Fassa, and one of the most important in the area. Its origins can be traced back to 1897, when a building was built by the German Alpine Club, to which further buildings were added until the last enlargement in 1912, before the hut finally became Italian in 1923. The Vajolet hut is located in a location known as “Porte Neigre” ('Black Doors'). Sitting right under the (towers) Torri del Vajolet, it has a position that makes it an ideal starting point for several excursions and mountaineering ascents.

The Preuss Preuss  (2,243 m; open summer only) is near Rifugio Vajolet, also situated in the municipality of Vigo di Fassa, at 2,243 m.The Preuss Rifugio was built in the 1920s through the efforts  of the famous local Alpine guide and mountaineer Tita Piaz, and it is dedicated to another – lesser known – Austrian alpinist, Paul Preuss. Like the Rifugio Vajolet, it is also located in the area known as “Porte Neigre” – under the Torri del Vajolet – on a rocky crag suspended above the Vajolet valley (‘Vallone del Vajolet’), just a few metres away from the historic Rifugio Vajolet.

The Re Alberto Rifugio (Gartlhütte) (2,621 m; open in summer only) is an Alpine hut located in the township of Tires/Tiers, in South Tyrol. The first construction dates back to 1929, when Marino Pederiva erected a small wooden cabin, which was then acquired by the great Alpinist Tita Piaz, who in 1933 had the first 'Rifugio' built up here. The hut name is to honor Albert I, King of Belgium, who used to make his excursions in the Dolomites together with Tita Piaz, accompanied also by the Alpine guide Vitale Bramani and others. It was extended and restructured on a couple of occasions, until reaching its actual aspect.  From the Re Alberto hut it is easy to reach the Piz Piaz (2,690 m), the Torre Delago (2,790 m), the Torre Stabeler (2,805 m), the Torre Winkler (2,620 m) and the ‘Anticima Nord’ of the Catinaccio (2,911 m).

The Passo Santner Rifugio (open summer only) is located in the township of Nova Levante/Welschnofen. It is set up against the two imposing walls of Cima Catinaccio, which with its 2,981 m is the second highest mountain in the whole range. To the east it is connected through a glacial valley to the Re Alberto mountain hut, while to the west a precipice falls sheer for almost 1,000 m, crossed by the 'Via Ferrata del Passo Santner', in turn connecting this hut to the Rifugio Fronza alle Coronelle. The construction of the Passo Santner mountain hut dates back to 1956.

The Principe Pass Rifugio (2,601 m; summer only, but occasionally open on winter weekends also). It was erected in 1952, and its first construction took place in the valley floor, then it was dismantled and brought to altitude on backpack, piece by piece and reconstructed there! This Alpine hut is composed of two separate small buildings, right on the Passo Principe, by the opening between the Cima Piccola di Valbona and the Catinaccio d'Antermoia, the highest peak of the entire group. It is located in an ideal position for starting several excursions and ascents. Nearby Rifugio Duca di Pistoia, at a much lower altitude (1,774 m), is open all year round.

The Fronzaalle Coronelle Rifugio (2,337 m; open summer only) can be reached also with a cable car from Passo Costalunga. it is located in the township of Vigo di Fassa, in the western sector of the range. It is located at the foot of the wall of Cresta Davoi, in a dominant position overlooking Passo Nigra. It is the base for excursions on the Coronelle and to the Cima Roda di Vaèl, when ascending from Passo di Vaiolon. The roundtrip around the Cima Catinaccio passes through the ‘Via Ferrata’ of Passo Santner, the Vajolet Towers and the Passo delle Coronelle (or of Vaiolon).

The Roda di Vaèl Rifugio (2,283 m; open summer only) is also situated in the territory of Vigo di Fassa. It was built in 1906 by the German Alpine Club, and it was then given to the Italian Alpine Club in 1921 by the military authorities, after this part of the Alps was annexed to Italy. The Alpine hut was then completely renovated between 1983-86. It is located on the southernmost fringes of the Catinaccio, which makes it a good starting point for several excursions and ascents in that part of the range. It is very close to the Baita Marino Pederiva.

The Baita Marino Pederiva (2,275 m) is a small Alpine hut (in fact, it doesn’t even bear the name ‘Rifugio’). Like the previous facility, it is on the southernmost fringes of the range, and it affords a useful base from where to explore this section of the massif.

The Bergamo al Principe Rifugio (Grasleitenhütte, 2,134 m; open summer only). is located on the western side of the Catinaccio, in the Valle del Ciamin. It was built in 1887 by the German Alpine Club, and later acquired by the Bergamo branch of the Italian Alpine Club (hence the name), which renovated it several times. It is a perfect starting point for excursions in the upper Val del Ciamin and for ascents to the Torre del Principe and the Pizzo di Valbona (2,802 m).

The Antermoia Rifugio (2,496 m; open summer only), is one of the numerous mountain huts present in the Val di Fassa basin. It is situated in the Vallone d'Antermoia, just a few hundred meters away from the lake bearing the same name, which is along the route of the yellow itinerary of the Via Alpina. The original building that hosts the Antermoia mountain hut dates to 1911, but it was renovated in the occasion of the opening of the yellow itinerary of the Via Alpina in the 1980s. In the last few years the ‘Rifugio’ was fully equipped with photovoltaic panels, thus turning to clean energy while providing valuable information to the visitors on the use of renewable energies.

The Alpe di Tires Refugio (2,440 m; also summer only, usually until half October, but even during the winter season it will provide some basic accommodation) is located in the township of Tires/Tiers, at the foot of the Denti di Terrarossa (Rosszähne), on the watershed between the Val di Fassa and the Val di Tires/Tiersstal, in the territory of the Parco Naturale dello Sciliar/Naturpark Schlern. The Alpe di Tires mountain hut was erected after WW2, at a time when poverty was still forcing many people to emigrate. Maximilian Aichner – a local boy – thus decided to climb the northern face of the Catinaccio d' Antermoia and reach in that way the Denti di Terrarossa, at the foot of the Alpe di Tires (Tierseralm) itself. From there he reached the Passo Tires, where he started to build the original hut in 1957.